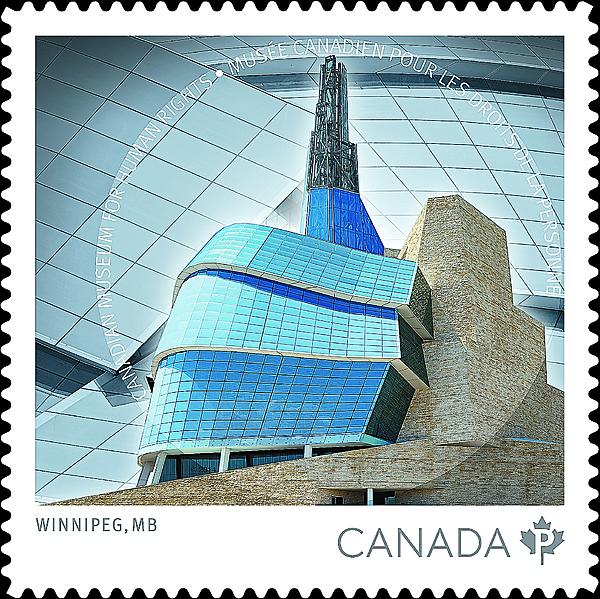 Canada Post will commemorate the upcoming September opening of the Canadian Museum for Human Rights with a single nondenominated (85¢) permanent-rate stamp. The stamp will be issued Aug. 20 in a booklet of 10.

Text inside the booklet describes the museum: “The Canadian Museum for Human Rights rises from the Prairie earth in Winnipeg as the only museum in the world solely devoted to human rights awareness and education. Visitors’ Journey of Inspiration takes them on a path of light through darkness, along ramps of glowing alabaster that criss-cross between galleries designed to challenge, motivate and uplift.”

The museum is the first national museum built in Canada since 1967, and is the first located outside of its capital region.

The museum is envisioned as a learning center “where Canadians and people from around the world can engage in discussion and commit to taking action against hate and oppression.”

The museum’s mission statement further explains its goals, which include preserving and promoting Canadian heritage at home and abroad; contributing to the collective memory and sense of identity of all Canadians; and inspiring research, learning, and entertainment that belong to all Canadians.

The stamp was designed by Adrian Shum of the design firm Circle, using a photograph by Mike Grandmaison of the museum’s exterior.