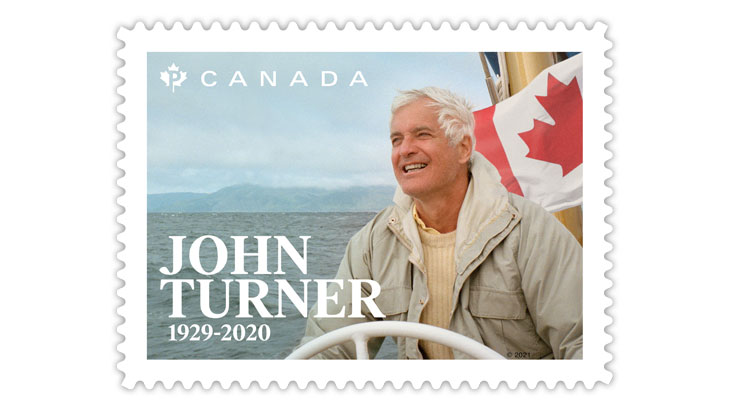 Canada Post unveiled and issued a stamp June 7 honoring former Prime Minister John Turner (1929-2020). Turner was born June 7, 1929, in England, and moved to Canada with his family as a child.

Turner was born June 7, 1929, in England and moved to Canada with his family as a child.

The nondenominated permanent-rate stamp (currently 92¢) shows a photograph of Turner sailing with Canada’s flag flapping in the wind behind him. The photo was chosen by Turner’s family.

The press release from Canada Post quoted his widow Geills Turner: “This is a tremendous tribute to John, and an honour to our family to see his life’s work recognized in such a meaningful way. The photo on the stamp is so special. I took it while we were sailing through a beautiful part of our country, in Haida Gwaii [an archipelago in British Columbia] in 1985. It represents John and his spirit. It evokes the love he had for nature, for the water, for Canada.”

The stamp is sold in a booklet of 10.

The cover of that booklet includes the following summary of Turner’s life: “Canada’s 17th prime minister, the Right Honorable John Napier Wyndham Turner (1929-2020) devoted much of his life to public service. A lawyer by profession, he was first elected to the House of Commons in 1962, and held various ministerial positions under then prime ministers Lester B. Pearson and Pierre Trudeau. Following his term as prime minister, he remained as leader of the Official Opposition from 1984 to 1990, retiring from politics in 1993. A year later, he was appointed a Companion of the Order of Canada.”

The stamp was designed by Paprika Design of Montreal, Quebec. It was produced in a quantity of 120,000 booklets.

Turner served as minister of justice and attorney general of Canada from 1962-72.

Canada Post said in its press release, “As Canada’s justice minister, he brought in the Official Languages Act, saw through a series of important Criminal Code reforms, and proposed a national legal aid system.”

The Vancouver, British Columbia, cancel on the FDC is a reproduction of Turner’s signature.