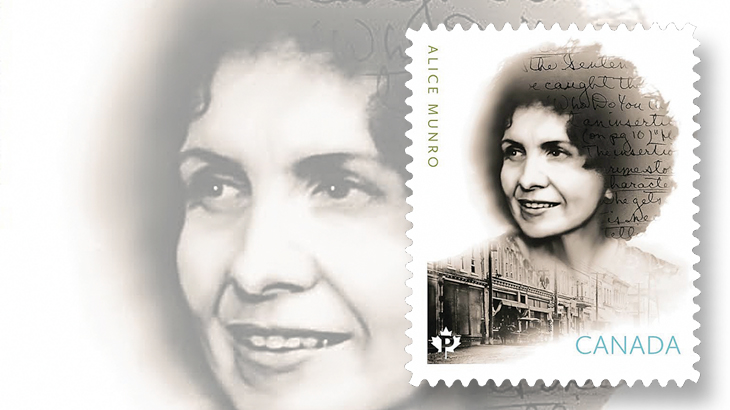 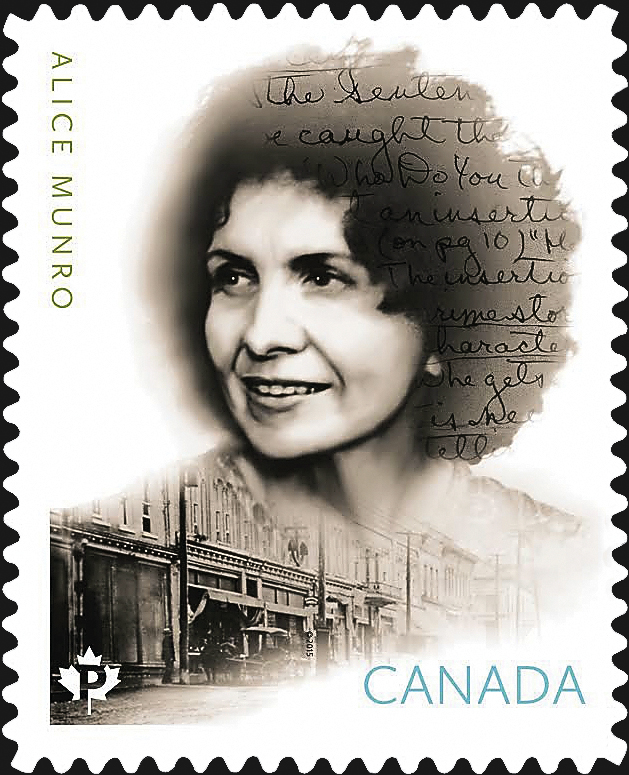 Alice Munro, winner of the 2013 Nobel Prize for literature, is honored on a postage stamp issued July 10 by Canada Post. The design includes a photograph of the author taken by her daughter, an early image of her rural Ontario hometown, and handwriting blended into the background. 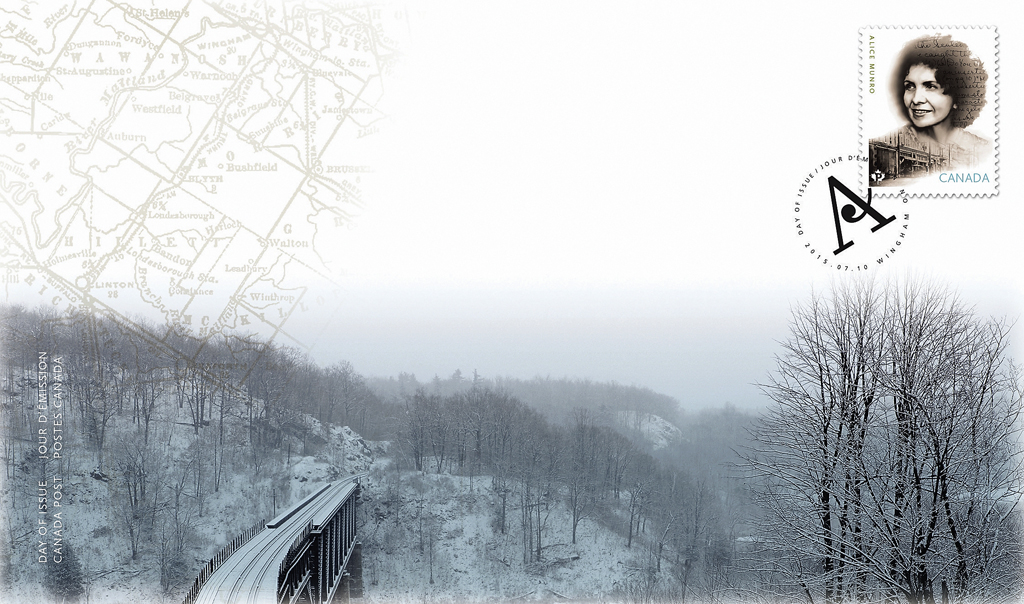 Canada Post’s official July 10 first-day cover for the Munro stamp superimposes a map onto a photograph of the Canadian National Railway-Maitland River Bridge near Wingham, Ontario, in the winter snow.
Previous
Next

Alice Munro, acknowledged master of the short story and the first Canadian woman to be awarded the Nobel Prize in literature, is celebrated on a new stamp that pays homage to important elements of her work.

Respected by peers and beloved by readers, Munro is one of Canada’s most renowned writers. Soon she’ll also be collected by her fellow Canadians, Canadaphiles and literature lovers alike when Canada Post honors the author July 10 with a special gift on her 84th birthday: a new commemorative produced by a new Canadian stamp printer.

The stamp features a photo of the author taken by her daughter Sheila Munro, and a vintage streetscape of Wingham, the small southwestern Ontario town where Alice Munro was born in 1931.

Many believe Wingham inspired the fictional town of Jubilee, in which many of her stories are set, some of which have been described as “Southern Ontario Gothic.”

Samples of the author’s handwriting are shown over her image.

The official first-day cover features a landscape photograph of Wingham’s Canadian National Railway-Maitland River Bridge in winter and a detail of a map of the region. The cover also has a Wingham, Ontario, first-day cancel with a distinctive large capital A for Alice.

An author who revitalized the short story, Munro’s early work was published in Canadian literary journals and featured on the Canadian Broadcasting Corp.’s radio programs. In the mid-1970s, her stories began to appear in The New Yorker, which brought her a broader international audience.

Her many collections of stories received many prestigious awards for excellence in writing.

Her first collection, Dance of the Happy Shades, was published in 1968, the year she won the first of her three Governor General’s Awards, followed by the Scotiabank Giller Prize in 1998 and 2004, and the highly competitive Man Booker International Prize in 2009.

Her success culminated in 2013 when she became the first Canadian woman to win the Nobel Prize in literature, and was lauded as “master of the contemporary short story.”

When she was presented with her Nobel Prize, a representative of the Nobel Committee for Literature said, “Reading one of her texts is like watching a cat walk across a laid dinner table. …Alice Munro is often able to say more in 30 pages than an ordinary novelist is capable of in 300.”

The stamp designer, Marcio Morgado, and art director, Paul Haslip, are two of the three principals of HM&E Design Communications, located in Toronto.

The printing total was 1.5 million stamps, and 10,000 official FDCs were produced.