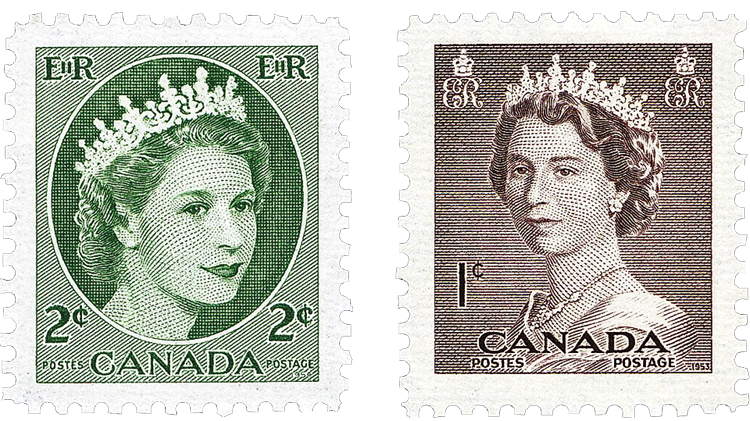 Canada’s first Queen Elizabeth II definitives in 1953, including the 1¢ brown stamp (left, Scott 325), were based on a portrait of the new queen by Canadian photographer Yousuf Karsh. Those stamps gave way to a much more popular portrait series by renowned British photographer Dorothy Wilding, in use from 1954 to 1963, that includes this 2¢ green stamp (right, 338). 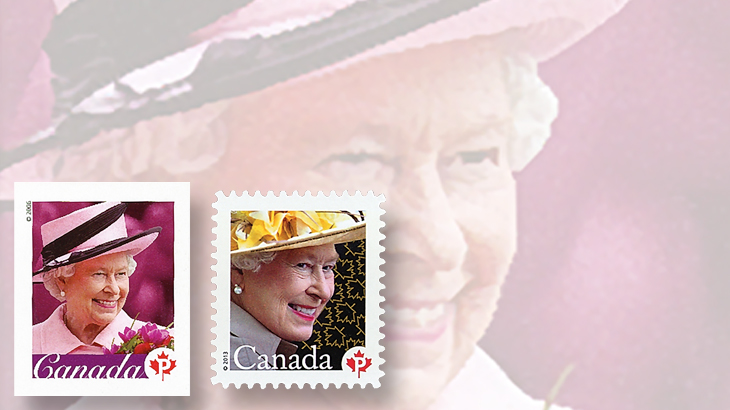 Since 2006, all Canada’s Queen Elizabeth II definitive stamps, including these two from 2006 and 2013 (Scott 2188 and 2617, respectively), are full-color portraits of a smiling monarch wearing a fabulous hat. 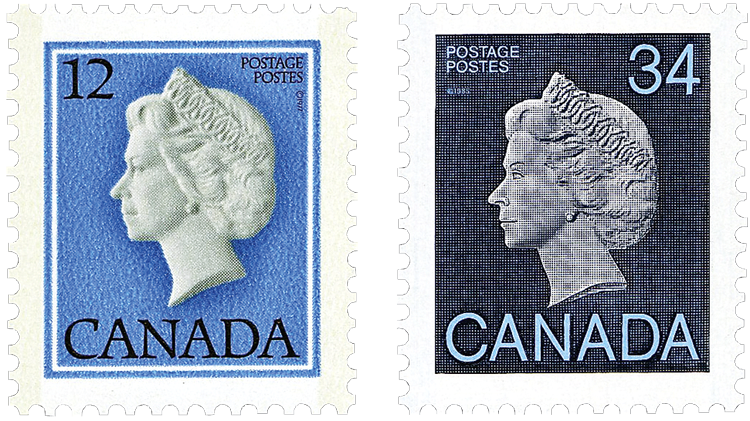 From 1977 to 1987, Canada’s Queen Elizabeth II definitive stamps used fuzzy left-facing gray profiles of the monarch shaded with gray (as in Scott 716, left) and later rendered in two shades of blue (926, right). 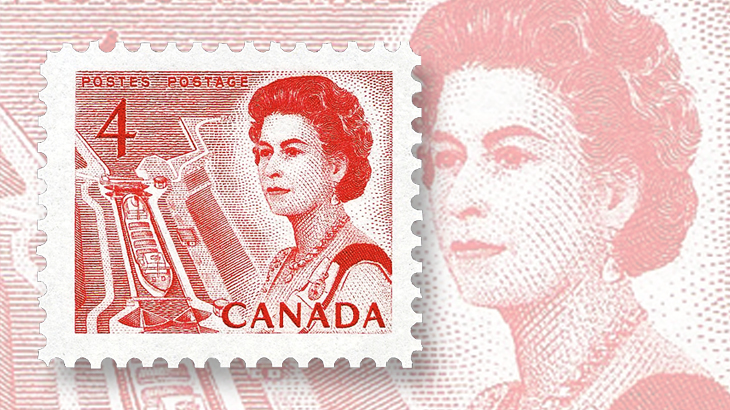 When Canada marked its centennial in 1967, new definitives pictured the queen and sights of various Canadian regions, such as the locks that opened the Great Lakes to shipping on this 4¢ carmine rose (Scott 457). 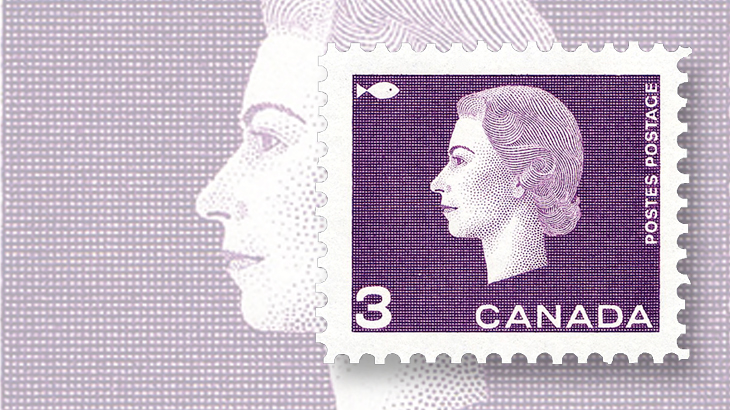 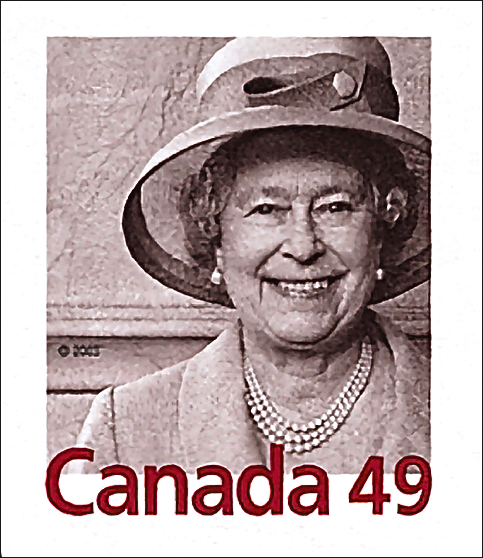 A candid shot of the queen taken during a 5-minute Buckingham Palace golden jubilee photo op by Canadian musician and photographer Bryan Adams was the basis of this delightful 2003 49¢ stamp (Scott 2012). 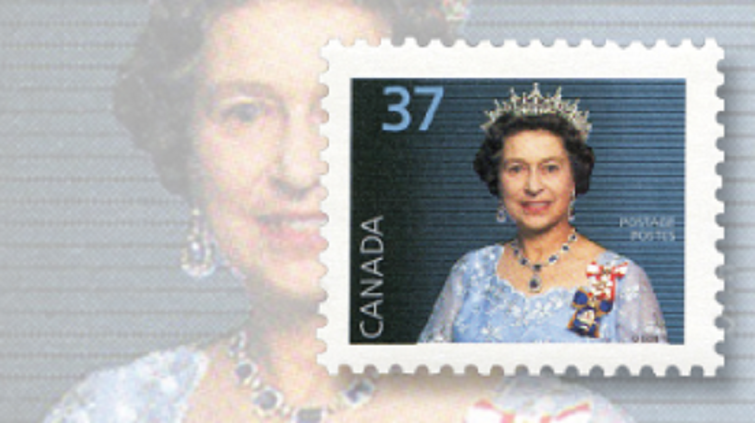 In the author’s opinion, Canada’s worst definitives of the long reign of Queen Elizabeth II were a series that showed the queen in regal garb with a dazed expression against a digital background. First in the series is this 1987 37¢ stamp (Scott 1162), but after a trivial increase in image size, only the denomination and color of the fake backdrop changed for the next 13 years. 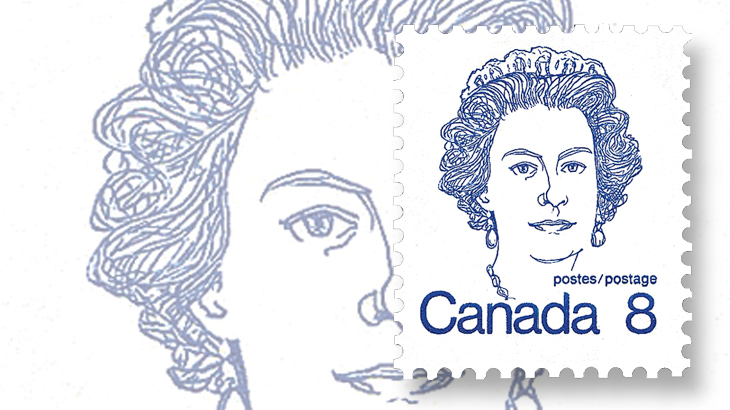 No one did Canada’s prime ministers any favors in the embarrassing Caricatures definitive series of the 1970s, but at least the queen’s portrait remained appealing on this 8¢ blue stamp (Scott 593). 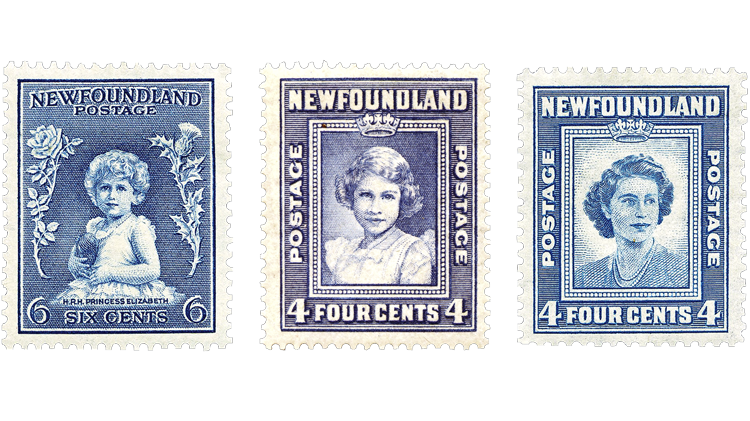 Princess Elizabeth is shown growing to adulthood on these three stamps from Newfoundland, which joined Canada as a province in 1949. From left to right, the stamps depict her as she appeared at age 3½, age 12, and on her 21st birthday.
Previous
Next

As noted lately in Linn’s and most media outlets in the western world, on Sept. 9 the reign of Queen Elizabeth II became longer than that of any other monarch in British history. It surpassed the mark of 63 years and 216 days on the throne set by her great-great-grandmother, Queen Victoria.

This review does not include the many collectible tagging, booklet and minor varieties, Official overprints, or portraits used on postal stationery, some of which differ markedly from their adhesive counterparts.

Even eliminating all these, I count 95 face-different stamps, including the one marking her historic reign issued Sept. 9.

The first of these was a 6¢ stamp from Newfoundland in 1932 (Scott 192), engraved from a photograph made by Marcus Adams in 1929 when the princess was just 3½ years old.

In the nearby illustration, this 1932 stamp is shown on the left of a trio of blue portraits of the princess on stamps from England’s oldest colony, which became Canada’s last province when it joined in 1949.

In this column, I am focusing on definitives showing the queen and will leave the rest — commemorating royal visits, anniversaries and various milestones of the monarchy — for a later column.

After the death in 1952 of King George VI at the age of 56, Elizabeth immediately became queen, although it would be another 16 months before she was formally crowned.

Work to design a new definitive picturing the queen began within a week of her accession as monarch. Selected for the design was a three-quarter face photographic portrait by renowned Canadian photographer Yousuf Karsh, which Elizabeth herself approved.

The first Queen Elizabeth II definitives were issued May 1, 1953. Although Karsh’s photograph was warm and appealing, the engraved rendering failed to capture these elusive qualities, and the stamps failed to find favor with the public.

The 1¢ brown denomination (Scott 325) is shown nearby. To its right is a 2¢ green definitive (Scott 338) from the series that replaced it, selected by a Post Office Department mindful of the chilly reception of the Karsh issue.

This time a right-facing image was carefully chosen from the now-famous 1952 shoot by British photographer Dorothy Wilding, picturing a smiling queen in the tiara that had been a beloved wedding gift to her from her mother in 1947.

Swiftly introduced in 1954, these Wilding definitives would remain in use for almost a decade, and were as well-regarded in Canada as their counterparts had been in Great Britain.

Beginning in 1963, a new definitive series modestly introduced Canadian content to the nation’s basic postage. Queen Elizabeth gamely played along, not only sitting twice for Montreal artist Ernst Roch to complete his left-facing profile, but commenting favorably on the simple, elegant result, which was in use on stamps for the next five years.

The cleanly stylized queen against a background of bold color gave the new horizontally formatted stamps their name, the Cameo Issue.

The Canadian content consisted of adding to each denomination a tiny icon in the top-left corner to represent a key natural resource and national industry: crystals for mining on the 1¢; a tree for forestry on the 2¢; a fish for Canada’s fisheries on the purple 3¢ (Scott 403, shown with this column); a transmission tower for hydroelectric energy on the 4¢, and the ripe head of a stalk of wheat for agriculture on the 5¢.

Canada celebrated the centennial of self-government in 1967 with a recently minted flag to wave, a royal visit, the Expo 67 world’s fair in Montreal, and a new set of Centennial definitives.

Formatted like the Cameos, the stamps used the same photo of Elizabeth II by Anthony Buckley of London as the Royal Visit commemorative later that year (Scott 471). In place of the simplicity of the Cameos, however, the Centennials used engravings to honor Canada’s regions.

On the 1¢ a dog sled symbolized the high north; the 2¢ pictured a totem pole of the Pacific coast; a combine and an oil derrick represented the prairie provinces on the 3¢; a ship in a lock on the 4¢ carmine rose (pictured, Scott 456) was the image for the Great Lakes of central Canada; while lobster traps and a boat on the 5¢ stood for the maritime provinces of Canada’s Atlantic coast.

The 7¢ and 8¢ Centennials that followed to keep up with rate increases in 1971-72 pictured various means of modern transportation and Ottawa’s Library of Parliament, respectively.

Affordable, fascinating and available in a wide array of formats, booklets and tagging varieties, Centennial definitives have been eagerly mulled over and sought after by several generations of specialists. However, they mark the end of the richest era for Queen Elizabeth II definitives.

The portrait of the queen was far and away the best design in an undistinguished series of Caricature definitives that debuted in 1972.

Thereafter, for the next 27 years, the queen remained always available on Canada definitives, but I feel that the stamps were invariably boring.

From 1977 (Scott 716) to 1983 (792) came a grainy-looking sequence of left-facing gray profiles on stamps, evidently intended to masquerade as a poor man’s version of the Machin definitives — those exquisitely rendered stamps of Great Britain.

This was followed from 1987 to 2000 by a sad relapse into a tedious series, each with the same tiny, unflattering portrait of her majesty with an unnatural-looking smile, reminiscent of those often found on school photographs, varying only in the dull shade of the computer-generated background and ever-increasing face values.

I like to think the new millennium prompted a fresh look at these awful adhesives. At any rate, the 49¢ definitive shown nearby (Scott 2012) was the first to turn the tide.

As a news release memorably told it: “Canada Post’s domestic rate (49¢) definitive stamp portraying the Queen is based on a photograph taken during her Golden Jubilee year by the Canadian rock musician Bryan Adams. Like other photographers granted the privilege for this occasion, Adams was given just five minutes to obtain a photograph that was both memorable and distinctive.

“In a quick session at the Garden Entrance to Buckingham Palace, he took this unusually informal, close-up image of the Queen, a portrait of a familiar, mature woman. ‘She’s a mother and a grandmother,’ says Adams, ‘and I think my photo gives us a glimpse of the real person.’ ”

First, this was no lucky shot by a happy amateur; Adams enjoys international recognition as an outstanding cameraman. More importantly, Adams’ “glimpse of the real person” was everything that the design on the stamps it replaced was not. Maybe that real person had to take her crown off to truly be seen.

To Canada Post’s credit, after a 50¢ reprise of Adams’ image in blue (Scott 2075), those who were responsible for later definitives took Adams’ lesson to heart. As good as she looks in an heirloom tiara or gem-studded crown, Queen Elizabeth II looks even better in a smart hat.

And when she looks and feels more herself, pictured in brilliant colors, she shows the most appealing asset of any lovely woman — a genuine, radiant smile that is delightful to behold.

On these stamps, Elizabeth II appears as the regal, stylish but beloved grandmother of the whole British Commonwealth — wise, charming, graceful, affectionate — everything you could want in a queen. Each of these stamps is unique, just like the once-in-a-lifetime monarch they honor, who may now be the most recognized woman on the planet. May we have opportunities to enjoy more such definitives in the years ahead.