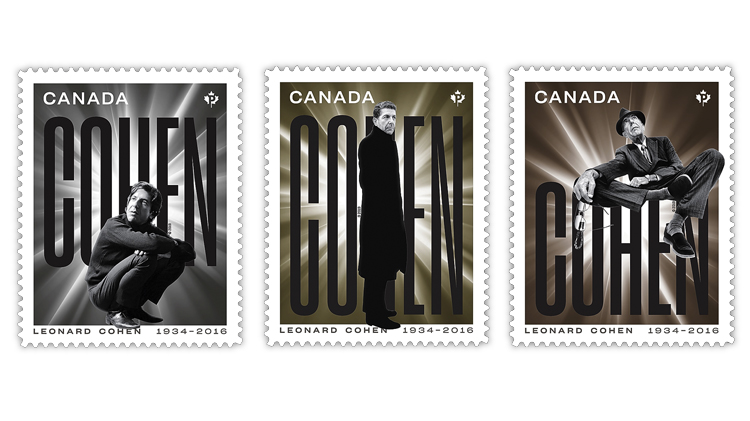 Canada Post created three stamp designs to honor Canadian music legend Leonard Cohen. The three permanent-rate stamps are issued in a self-adhesive booklet of nine. The same designs are used in a perforated and gummed pane of six consisting of three perma 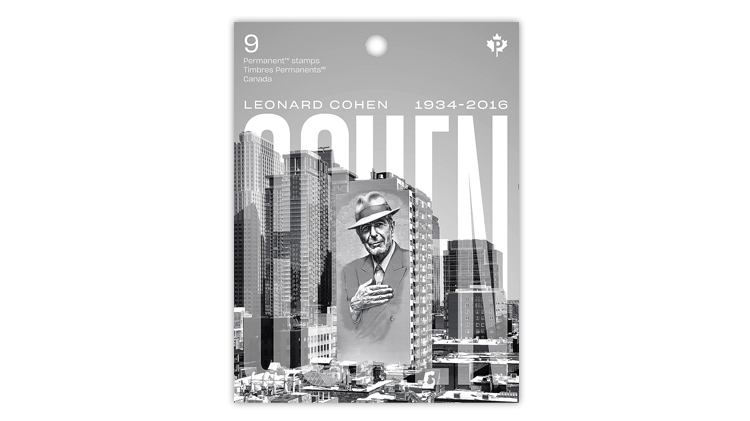 The cover to the Canada Post booklet of nine Leonard Cohen stamps shows the 21-story tall mural of Cohen on the side of a Montreal building. 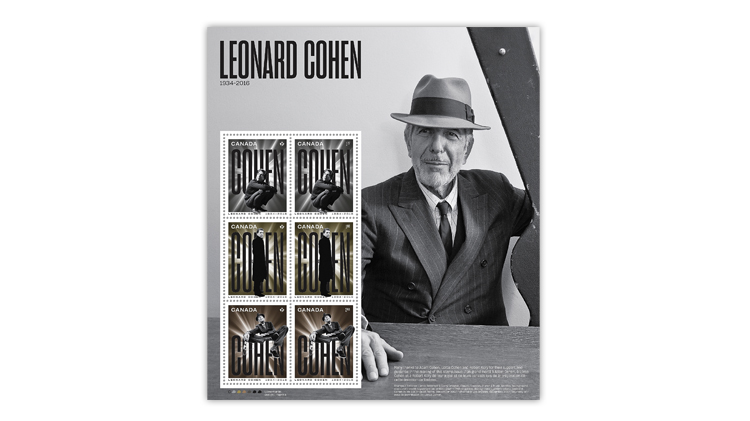 The pane of six Leonard Cohen stamps includes three permanent-rate stamps plus a $1.27 stamp for letters to the United States, a $1.90 stamp for oversized mail within Canada, and a $2.65 stamp for international letter mail.
Previous
Next

The stamp designs were revealed Sept. 20, the day before the stamps were placed on sale at Canada’s post offices on what would have been Cohen’s 85th birthday.

“The stamps were unveiled in the city of his birth, as Cohen’s record label, Sony Music, announced the release of new music from Cohen and a forthcoming album release titled Thanks for the Dance,” according to Canada Post.

The unveiling event took place in Montreal at the Glass Court of the Museum of Fine Arts.

The three stamp designs feature black-and-white photographs of Cohen in front of large letters spelling out his last name. The metallic-color background on each stamp is split with rays of light.

The first design shows Cohen (in his early 30s) in a crouch, and represents “his impressive debut in the 1960s, including two songs that became enduring favourites, Suzanne and So Long, Marianne,” according to Canada Post. The photograph by Jack Robinson is set against a silver background.

The second photo of Cohen standing upright and wearing a long dark overcoat leaps ahead two decades to 1988, to show “the resurgence of his popularity in the 1980s and the early 1990s, with his unforgettable and oft-covered Hallelujah (1984).” The photo was taken in France by Claude Gassian and is shown with a gold background.

The final image, taken by British photographer Platon when Cohen was in his late 70s, shows him dressed in a suit and hat, but posed quite casually. The full original photo has Cohen relaxed on a bar stool with his right leg up on the seat, but the stool has been cropped away in the stamp design to show him seemingly seated upon his own last name. A pair of glasses dangle from his right hand.

This third design represents Cohen during a period that Canada Post describes as “a final burst of creative genius” before his death at age 82.

The stamps have been issued in several different formats, beginning with a booklet of nine nondenominated permanent-rate (currently 90¢) self-adhesive stamps, three each of the three designs.

The booklet cover shows a view of Montreal that includes the striking 21-story Leonard Cohen mural on the side of a building along Crescent Street.

Inside the booklet, a well-known quote from Cohen’s 1992 song Anthem is printed in large letters: “There is a crack, a crack in everything, that’s how the light gets in.”

A perforated and gummed pane offers six different stamps: three at the permanent rate, and one each denominated $1.27 for letter mail to the United States (crouching pose), $1.90 for oversized domestic mail up to 50 grams (standing pose) and $2.65 for international letter mail (seated pose).

A photograph of Cohen with his right hand upon a wooden table fills the entire pane around the perforated stamps. That photo was taken in his Los Angeles home in December 2007 and is courtesy of photographer Lorca Cohen, Leonard Cohen’s daughter.

Canada Post is also offering a set of four first-day covers for the new Cohen issue.

Three covers are individually franked with one of the denominated Cohen stamps. The fourth is franked with all three permanent-rate stamps.

Four different round pictorial first-day cancels have been designed relating to Cohen and his career.

The postmark on the $1.27 stamp FDC includes an image of the Anima Sola, an imprisoned woman in chains surrounded by flames. It reflects an illustration on the back of the 1970 album Songs of Leonard Cohen.

The postmark on the $1.90 stamp FDC shows two dancers, apparently a reference to Cohen’s 1984 song Dance Me to the End of Love.

A portrait of Cohen mostly in silhouette is shown in the postmark on the $2.65 stamp FDC.

The FDC with three permanent-rate stamps has the group of images from the cover of the 1992 album The Future in its postmark: a hummingbird, a heart and opened handcuffs.

The postmarks are all from Montreal, and the all-over cachets on each envelope are photographs of Cohen during various stages of his life.

Cohen was born Sept. 21, 1934, in Westmount, a Montreal enclave. Canada Post provided the following glimpse into the early years of his career.

“In the mid-1960s, the income from writing four books of poetry and two novels left him struggling ‘to pay my grocery bill,’ he once recalled. After returning to Canada from the Greek island where he’d lived for years, the self-taught guitarist discovered the folk music movement sweeping North America. He tried his hand at writing songs. He played some privately for singer Judy Collins, who loved them. A folk and pop star, she sang two of them on her next album, becoming one of the hundreds of artists who would record Cohen’s songs during his life.”

Over the course of his lengthy career, he developed a devoted worldwide following with music that weaves through folk, rock, jazz and more. He is most highly regarded for the descriptive poetry of his lyrics, which range from despairing to hopeful.

His 1967 debut album opened with Suzanne, which was recorded around the same time by Collins, and also by singer-actor Noel Harrison.

His many honors include a governor general’s performing arts award for lifetime artistic achievement in 1993, and a Grammy lifetime achievement award in 2010.

The title track of the last album recorded and released before his death, You Want it Darker, received the 2017 Grammy award for best rock performance.

Canada Post will service 15,000 each of the four FDCs.

Advance word of the Leonard Cohen stamp set was released Sept. 12 and reported on page 18 in Linn’s issue of Sept. 30.