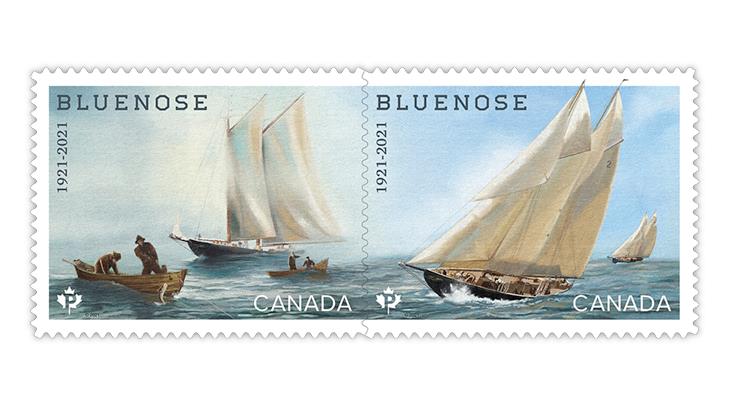 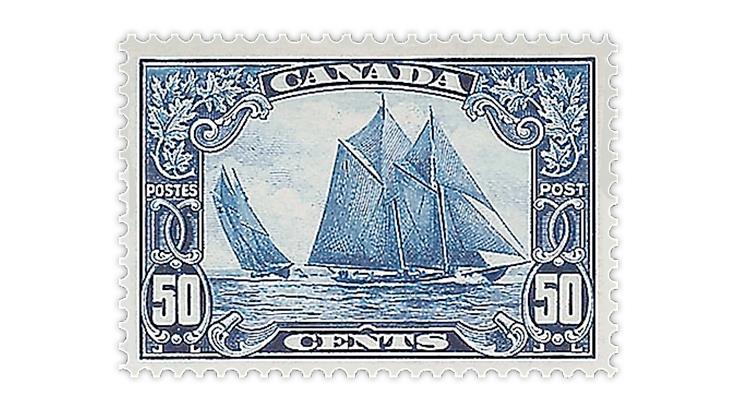 Canada first pictured the schooner Bluenose on an engraved blue stamp issued in 1929. 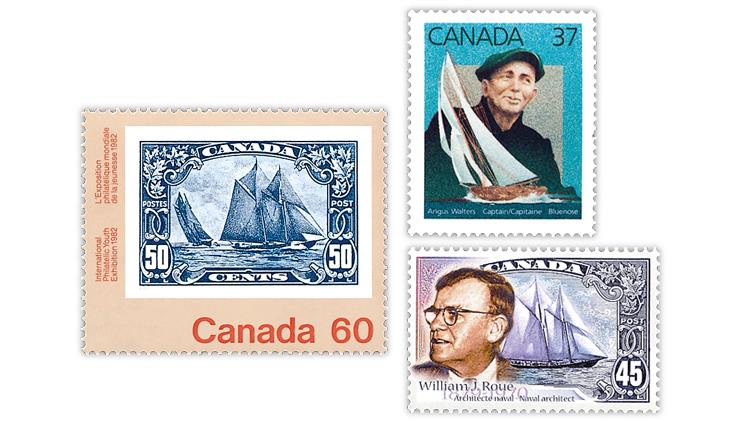 Three other Canadian stamps also feature the Bluenose: a stamp-on-stamp design in 1982; a commemorative honoring the schooner’s captain, Angus Walters, in 1988; and another commemorative for its designer, William James Roue, in 1998.
Previous
Next

Canada Post issued two stamps June 29 to celebrate the 100th anniversary of the launch of Canada’s most famous ship, the fishing and racing schooner Bluenose.

Canada Post said in an online article: “Constructed of Nova Scotia oak, pine, birch and spruce, and with towering masts of Douglas fir, Bluenose took shape over the winter at the Smith & Rhuland Shipyard in Lunenburg [Nova Scotia]. Its name proudly came from a nickname for Nova Scotians dating back to the late 18th century. On March 26, 1921, hundreds of spectators watched as the vessel officially launched from the shipyard.”

The two new stamps are se-tenant (side-by-side) in booklets of 10 (five of each stamp) and in souvenir sheets of two. The stamps are nondenominated, paying the permanent rate (currently 92¢).

The designs represent the dual purpose of Bluenose. The stamp on the left portrays it as a fishing vessel, while the one on the right shows it competing in its first race in 1921, the International Fisherman’s Race.

Canada Post said in its press release announcing the stamp, “The schooner was born of a seafaring rivalry between two fishing communities: Lunenburg, Nova Scotia, and Gloucester, Massachusetts. Competition over whose fishing vessels were the fastest led to the creation of the International Fishermen’s Trophy series in 1920.”

The Bluenose also excelled as a vessel for catching cod in the Grand Banks in the Atlantic Ocean near Newfoundland. According to the online Canadian Encyclopedia, the schooner held the record for the largest catch of fish brought into Lunenburg.

In addition, the schooner represented Nova Scotia and Canada internationally, including at the 1933 Chicago World’s Fair and the 1935 silver jubilee of King George V, and has served as a national icon, first appearing on a postage stamp in 1929 and on the reverse of the dime in 1937.

The aforementioned online Canada Post article quoted Joan Roue, great-granddaughter the ship’s designer: “These kinds of things only happen once in a lifetime, and that’s why it’s so important we celebrate Bluenose’s 100th birthday. As proud as I am of my great grandfather, he was only one cog in that wheel. It was a perfect storm. It was him. It was Angus Walters, the best captain on the seas at that time. It was the crew, it was the builders. It took everything together to make her the vessel that she was.”

The new Bluenose stamps were designed by Dennis Page and Oliver Hill and feature illustrations by Michael Little. Canada Post reports that Little was inspired by the work of marine artist William E. deGarthe (1907-83), specifically the painting Bluenose and Three Dories, for the design of the stamp showing the fishing scene.

Colour Innovations printed the stamps and souvenir sheets using five-color lithography. A total of 200,000 booklet stamps were printed, according to Canada Post.

Canada Post also is offering the stamps in what it calls an “uncut press sheet.” The sheet includes six rows of four stamps arranged in se-tenant pairs. The sheet measures 650mm by 420mm, and the quantity produced was 2,500.

The official first-day cover is franked with the souvenir sheet, canceled June 29 in Lunenburg. The cachet in the lower left corner shows deGarthe’s painting Bluenose and Three Dories.