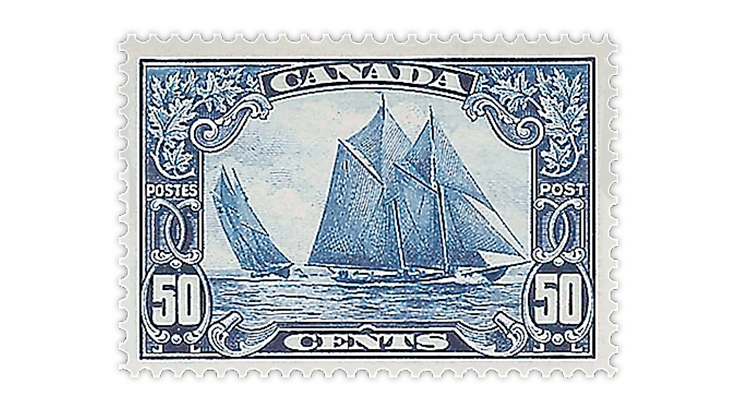 Canada Post will commemorate the 100th anniversary of the launch of the Bluenose, the famous fishing and racing schooner, on an issue in its 2021 stamp program. Canada first featured the schooner on this engraved 50¢ stamp issued in 1929.

Canada Post will commemorate the 100th anniversaries of the discovery of insulin and the launch of the legendary schooner, the Bluenose, on stamps to be issued in 2021.

In a Nov. 3 press release, Canada Post said, “The stories behind some of Canada’s most historic milestones, significant achievements, iconic artists and natural wonders will come to life in the 2021 stamp program.”

Each of these three Victoria Cross recipients lived on Pine Street in Winnipeg, Manitoba, and the street was renamed Valour Road in their honor in 1925.

Among the other commemoratives in the 2021 program are stamps paying tribute to two legends of Canadian ballet. This issue was originally scheduled for 2020 but was postponed.

Canada Post reports that it will wrap up its current Lunar New Year series in 2021 “with a stunning, multi-stamp retrospective.”

Both insulin and the Bluenose have been honored on previous Canadian stamps.

Insulin was discovered by Canadian medical scientist Frederick Banting (1891-1941) and his colleague American-Canadian Charles Best (1899-1978) in 1921. Others also contributed to this discovery.

According to the digital The Canadian Encyclopedia: “For many years scientists believed that some kind of internal secretion of the pancreas was the key to preventing diabetes and controlling normal metabolism. No one could find it, until in the summer of 1921 a team at the University of Toronto began trying a new experimental approach suggested by Dr. Frederick Banting. By the spring of 1922, the Toronto researchers — Banting, Charles Best, J.B. Collip and their supervisor, J.J.R. Macleod, were able to announce the discovery of insulin. In 1923, Banting and Macleod received the Nobel Prize for one of the most important, and most controversial, breakthroughs in modern medical history.”

The Bluenose, considered to be Canada’s most famous ship, is shown on one of the country’s most beautiful stamps: the engraved, dark blue 50¢ definitive issued in 1929 (Scott 158).

That stamp is included in the Smithsonian’s National Postal Museum’s virtual exhibition “The Sun Never Sets on the Stamps of the British Empire.”

The description of the stamp in the exhibit includes this brief history of the Bluenose: “… a 258-ton vessel built at Lunenburg, Nova Scotia in 1921 as a dual-purpose cod-fishing and ocean-racing schooner. Although this might sound an improbable combination, she both fished the Grand Banks for record catches of cod and also competed for the $4,000 first prize in the International Fisherman’s Cup Race. In fact she won it, reigning undefeated for eighteen years, often against stiff opposition from the United States.”

Among the other stamps picturing the schooner are two stamp-on-stamp designs of the 1929 stamp: a 1998 45¢ commemorative honoring naval architect and Bluenose designer William James Roue (Scott 1738), and a 1982 30¢ promoting the Canada ’82 International Philatelic Youth Exhibition (913).

Canada’s 2021 stamp program is tentative and subject to change.