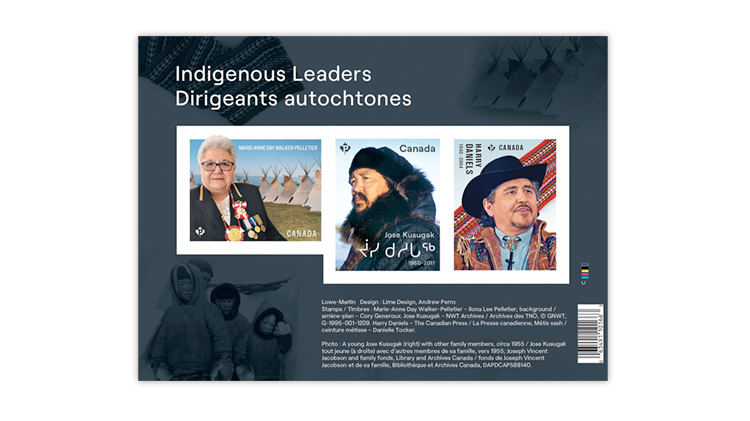 Canada Post issued a souvenir sheet along with three stamps on June 21, National Indigenous Peoples Day in Canada. The background of the souvenir sheet features photographs with ties to the people honored on the new Indigenous Leaders stamps: Chief Marie-

The stamps were printed in three booklets of six with one design appearing in each booklet.

“Harry Daniels, Marie-Anne Day Walker-Pelletier and Jose Kusugak fought tirelessly to have their languages, cultures and traditions protected and preserved for future generations — and for every man, woman and child in this country to be treated equally and have the same opportunity to thrive,” Canada Post said in its Details magazine for collectors.

Through roles as a politician, activist, writer and actor, Harry Daniels (1940-2004) dedicated his life to the rights and well-being of Metis and nonstatus Indians, the term the Canadian government uses for First Nations individuals who are not registered with the federal government.

The stamp shows a photograph of Daniels taken at an Ottawa, Ontario, press conference in January 1998. A Metis sash runs along the background. According to the Manitoba Metis Federation, this sash continues to be an integral part of Metis cultural celebrations.

Jose Kusugak (1950-2011) worked to raise awareness about Inuit identity. In addition to showing a photograph of him, the stamp presents his name written in Inuktitut, the Inuit language spoken in the central and eastern Canadian Arctic.

Kusugak played a role in the efforts leading to the creation of Nunavut in 1999. According to Canada Post, this role has led some to consider Kusugak a Father of Confederation, a designation similar to Founding Father in the United States.

Chief Marie-Anne Day Walker-Pelletier, born in 1954, served as leader of the Okanese First Nation in Saskatchewan for nearly 40 years, the most consecutive terms of a First Nations chief in Canada.

The photograph used on the stamp was taken at a ceremony celebrating Day Walker-Pelletier’s appointment as a member of the Order of Canada. The photographer was her daughter, Ilona Lee Pelletier.

Canada Post also issued the three stamps in a souvenir sheet designed by Andrew Perro. The background of the sheet shows three photographs with ties to the leaders.

A photograph of Kusugak as a child with other family members appears in the bottom left of the souvenir sheet, a Metis sash drawing a connection to Daniels’ Metis heritage is in the top left, and the top right shows ceremonial tipis in a community near the Okanese First Nation that was led by Day Walker-Pelletier.