Canada Post celebrates the year of the ram with stamps 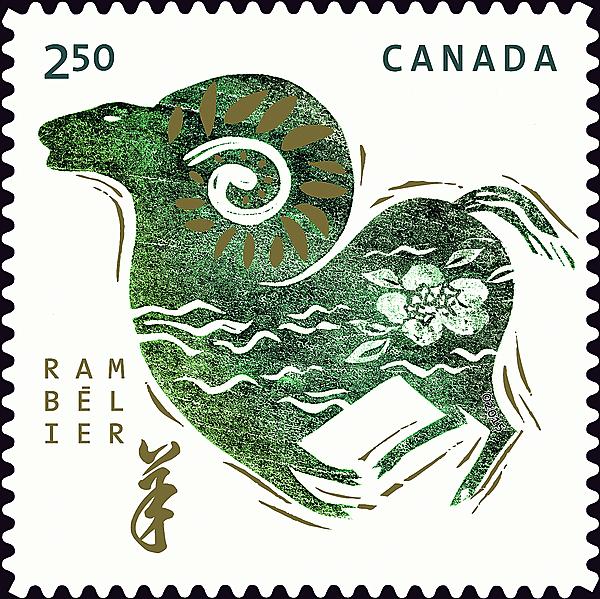 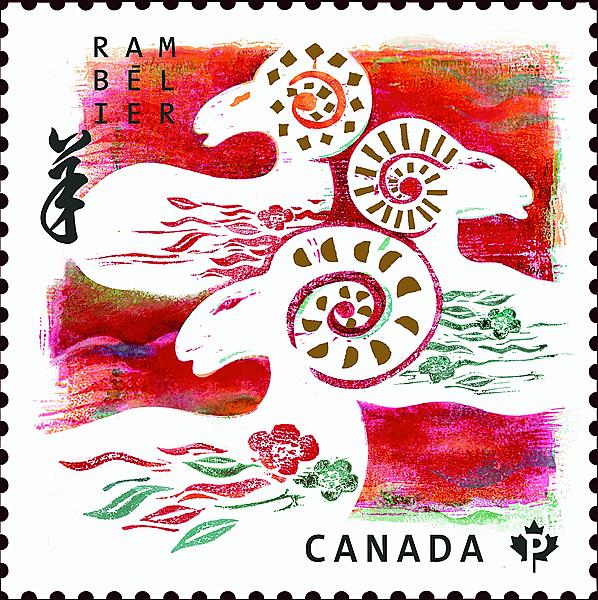 Canada celebrates the year of the ram in the seventh set of stamps in its current Lunar New Year series. Two stamps, souvenir sheets and a booklet were issued Jan. 8.

One Canada Year of the Ram stamp is a nondenominated permanent stamp, and the other is a $2.50 international letter-rate stamp.

The permanent stamp is always worth the basic domestic letter rate (currently 85¢). It was issued in panes of 25 with moisture-activated adhesive.

The $2.50 stamp was issued with moisture-activated adhesive in a souvenir sheet of one, and as a self-adhesive in a booklet of six that is designed to fold up and fit in a wallet.

Following the format of the other souvenir sheets in this series, the $2.50 Year of the Ram stamp is in a long souvenir sheet measuring 40 millimeters by 140mm.

Helene L’Heureux designed the Year of the Ram stamps and souvenir sheets using illustrations by Susan Scott. The calligraphy is by Ngan Siu-Mui.

The design of the permanent stamp depicts three symbolic rams on a red background with floral motifs on their torsos and geometric patterns on their curved horns.

The word “ram” appears in English in the upper right with the French “belier” in two lines below it. The “P” inscription is inside a symbolic maple leaf at lower right.

A single ram in green, also with a floral motif on its body and a pattern on its horns, is featured on the $2.50 stamp. The “ram” and “belier” inscriptions are in the lower left, and the $2.50 denomination in the upper left.

Lowe-Martin printed the permanent and $2.50 Year of the Ram stamps by seven-color offset lithography, plus embossing and foil stamping.

In addition to the stamps and souvenir sheets, Canada Post issued two postal cards featuring the same imprinted stamp designs as the permanent stamp and the $2.50 stamp, with enlarged versions of the designs on the picture side. The postal cards sell for $2.50 each.

The announcement in the magazine says of the qualities of people born during the year of the ram: “Those born under the influence of the eighth creature in the zodiac of lunar New Year are caring, sensitive (sometimes to the extreme), artistic, fashion savvy and intuitive. They long for beauty, to see the world, and many have the special talent of being able to turn challenges into opportunities — qualities shared, to some degree, among the Canadian Rams we just mentioned.”