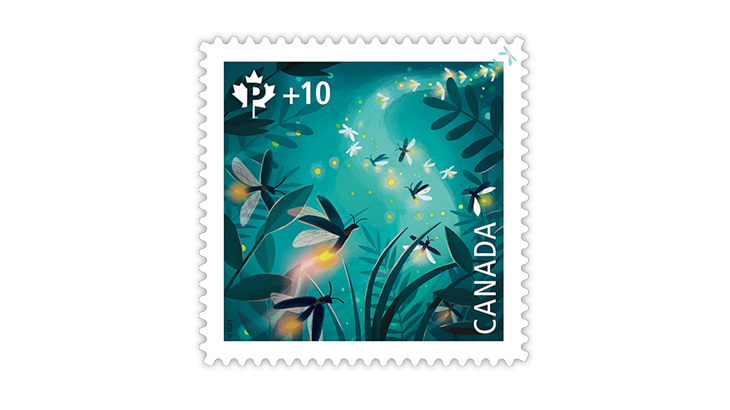 The winner was the design submitted by Subplot Design Inc. of Vancouver, British Columbia, featuring an illustration by Kim Smith, a children’s book illustrator.

Canada Post described Smith’s illustration for the semipostal stamp as literally glowing with creativity, adding that “The luminous fireflies in this charming illustration is a reminder of the light that shines within each of us.”

Colour Innovations of Toronto, Ontario, printed the stamp by five-color offset lithography in a quantity of 180,000 booklet panes of 10.

The Canada Post ordering numbers are 414169111 for the booklet pane of 10 and 414169131 for the FDC. The purchase price of the FDC includes a 10¢ donation to the Canada Post Community Foundation.

This semipostal is the 10th issue in an annual series that began in 2012 (Scott B19) with the establishment of the Canada Post Community Foundation. In a March 9 press release, Canada Post said that since 2013 “the Foundation has raised more than $11 million to support some 1,000 non-profit organizations that bring positive change to Canadian children.”