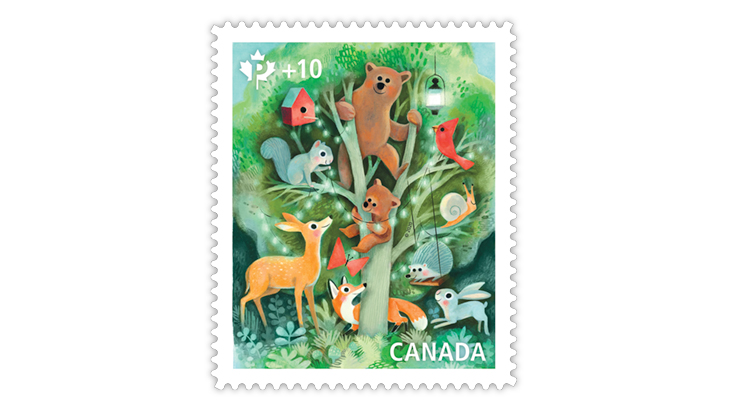 Canada Post reported in the September issue of its Details magazine for collectors that the Stamp Advisory Committee selected its top three designs and then “our frontline postal staff were asked to vote for their favourite based on what they had heard from customers about past [semipostal] issues.”

The winner was the design by Subplot Design Inc. of Vancouver, British Columbia, featuring an illustration by Isabelle Arsenault, an award-winning illustrator of children’s books.

Canada Post described her illustration for the semipostal stamp as showing “a diverse (and adorable) community of animals living peacefully in a bountiful tree,” adding that “it reminds us that, despite our differences, we have the power to come together.”

Canada Post does not identify the animals shown on the stamp, but the illustration clearly depicts a squirrel, deer, bear and cub, butterfly, red fox, cardinal and snail, all native to Canada. The small mammal on the swing resembles a hedgehog, which is not native to the Western Hemisphere.

Also shown in the illustration are a lantern and birdhouse hanging from the tree.

The stamp is nondenominated, paying the permanent rate for domestic letters weighing up to 30 grams (currently 92¢). This is represented by the letter P inside a maple leaf in the upper right corner of the design. The +10 beside it indicates the 10¢ surtax for the foundation.

Colour Innovations of Toronto, Ontario, printed the stamp by four-color offset lithography in a quantity of 160,000 booklets of 10. The four colors are represented by small images of animals in the upper right of the stamp pane: a cyan squirrel, magenta fox, yellow rabbit and black deer.

Canada Post serviced 7,000 first-day covers for this semipostal with an Ottawa, Ontario, cancel pictorial cancellation featuring butterflies. The illustration by Arsenault in the cachet shows some of the creatures from the stamp (bear cub, deer, rabbit and butterflies).

This semipostal is the ninth issue in an annual series that began in 2012 (Scott B19) with the establishment of the Canada Post Community Foundation.

In a March 9 press release, Canada Post said that since 2013 more than “775 organizations have shared in total funding of almost $9 million from the Foundation.”