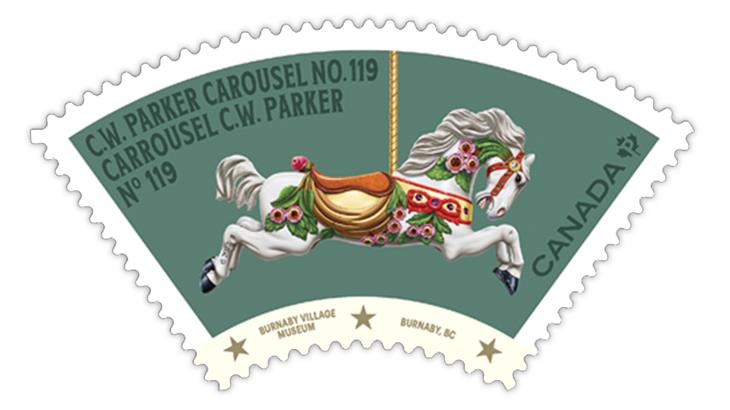 One stamp from the set of five nondenominated, permanent-rate Vintage Carousels stamps issued July 21 by Canada Post features a regal white horse against a sea green background. This horse also appears on the cover of the booklet of 10 stamps. 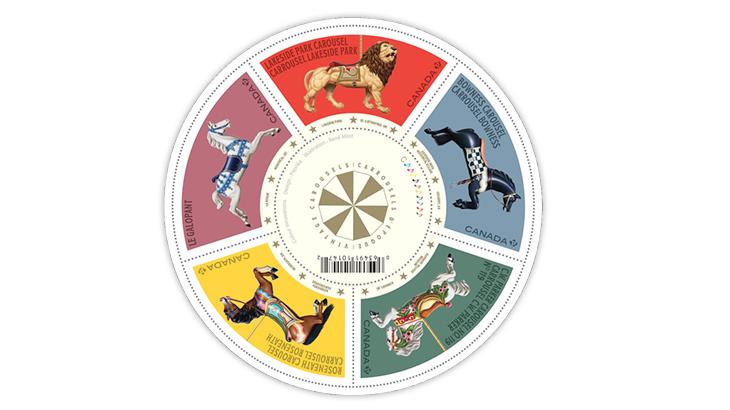 Each of the nondenominated, permanent-rate (currently 92¢) Vintage Carousels stamps features a different mount from a different carousel in Canada. Text on each stamp gives the name of the carousel and its location.

“The five carousels featured, with their elaborately carved and painted animals and cheery band organ music, demonstrate both high artisan craftsmanship and impressive technological advances for their era,” Canada Post said in its Details magazine for collectors.

The stamps were printed in a booklets of 10 (two of each design) and souvenir sheets of five (one of each design). Each stamp has two straight edges and two curved edges, so the stamps form a circle when all five are placed side by side.

Four of the mounts depicted on the stamps are traditional carousel horses, and one is a lion. The lion, presented on a stamp with a red background, comes from the Lakeside Park Carousel in St. Catharines, Ontario.

The Lakeside Park Carousel, built in 1903 by Kremer’s Carousel Works in the United States, contains 68 animals and four chariots, according to Canada Post. It has been at Lakeside Park since 1921 and still costs only a nickel to ride.

A stamp with a light blue background shows a black horse from the Bowness Carousel. This carousel arrived at the Heritage Park Historical Village in Calgary, Alberta, in 1969.

A regal white horse adorned with flowers is depicted on a stamp with a sea green background. The booklet cover shows the same mount, from the C.W. Parker Carousel No. 119 at the Burnaby Village Museum in Burnaby, British Columbia.

This carousel boasts 36 jumping horses, four stationary horses and a chariot, according to Canada Post. It arrived in Canada in 1936 and has been at the Burnaby Village Museum since 1993.

A brown horse against a yellow background commemorates the Roseneath Carousel, which has been located in Roseneath, Ontario, since 1932.

According to Canada Post, the Roseneath Carousel won the National Carousel Association Historic Carousel Award in 2010. It is the only Canadian carousel with this distinction.

The fifth stamp in the set shows another white horse, this one against a mauve background. The horse comes from Le Galopant, the carousel at La Ronde amusement park in Montreal, Quebec.