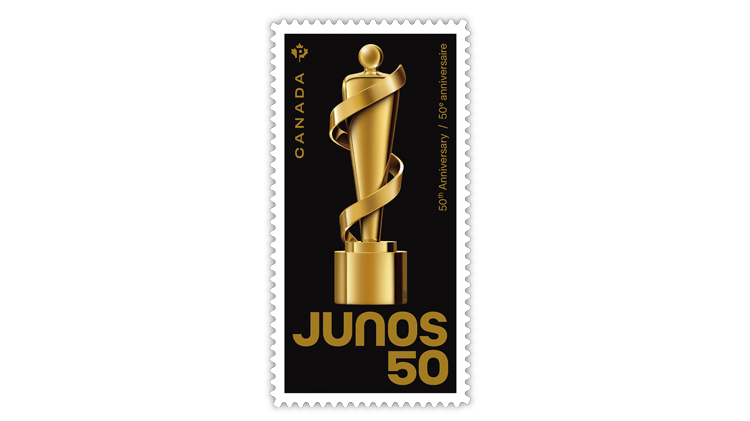 Canada Post honors the 50th anniversary of the Juno awards on a nondenominated permanent rate stamp issued April 8. The stamp depicts the new golden statuette that will be presented to this year’s winners of these Canadian music industry awards.

Canada Post issued a stamp April 8 to mark the 50th anniversary of its music awards known as the Junos.

The stamp, which also was revealed April 8, shows the new golden statuette created for the 50th anniversary. Like most recent Canadian commemoratives, it is a nondenominated, permanent-rate stamp (currently 92¢).

In announcing the stamp, Canada Post said that it “pays tribute to the country’s premier music event, and its role in supporting and showcasing Canadian artists and creators over five decades. Since 1971, the JUNOS have recognized Canada’s immense range of talent, from rising stars to household names, including 25-time JUNO winner Anne Murray — the recipient of the most JUNO Awards to date — Buffy Sainte-Marie, Celine Dion, The Tragically Hip, The Weeknd and so many more.”

The history of the Junos dates back to 1964, when Walt Grealis, editor and publisher of the music trade publication RPM, and Stan Klees, a record label executive, started the RPM Gold Leaf awards, according to the website of the Junos. The winners were selected by readers of RPM.

The first awards ceremony was held in 1970, and the next year, the awards were renamed in honor of Pierre Juneau, the first chairman of the Canadian Radio-television and Telecommunications Commission.

In 1975, the Canadian Academy of Recording Arts and Sciences was created to administer the awards, and voting became “exclusive to CARAS members in the Canadian music industry,” according to the Junos website.

Allan Reid, president and CEO of the Canadian Academy of Recording Arts and Sciences/the Juno awards and MusiCounts, said: “We are thrilled to partner with Canada Post to celebrate the 50th Annual JUNO Awards. Collaborating with this historical institution allows us to celebrate Canada and our nation’s renowned musical talent. Our new golden statuette will stand proud on the limited-edition stamp and we can’t wait for music lovers across the country to get their hands on one.”

The stamp featuring the new golden statuette on a black background was designed by Paprika and illustrated by Amanda Arlotta.

The stamp measures 25 millimeters by 49mm. Colour Innovations printed it in booklets of five (Canada Post ordering number 414163111). A total of 120,000 booklets were printed.

Canada Post created 7,000 official first-day covers with a gold cancel of Toronto, Ontario (product no. 414163131). The stamp is placed in the center of the cover, surrounded by golden statuettes on both sides.