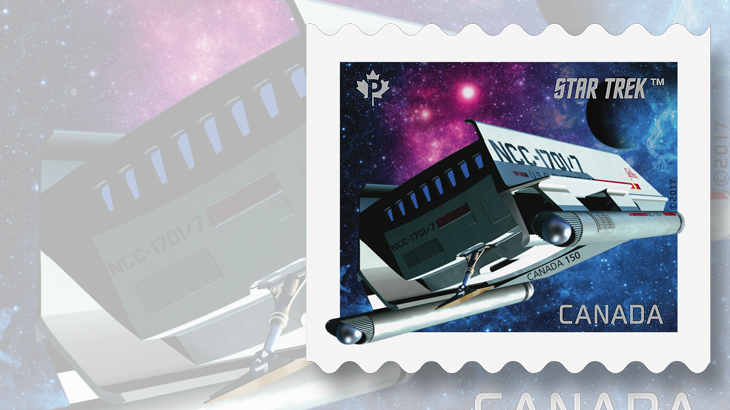 Another permanent-rate stamp, this coil depicts the Enterprise’s shuttle Galileo. It is available to collectors in rolls of 50, strips of 10, or strips of four. 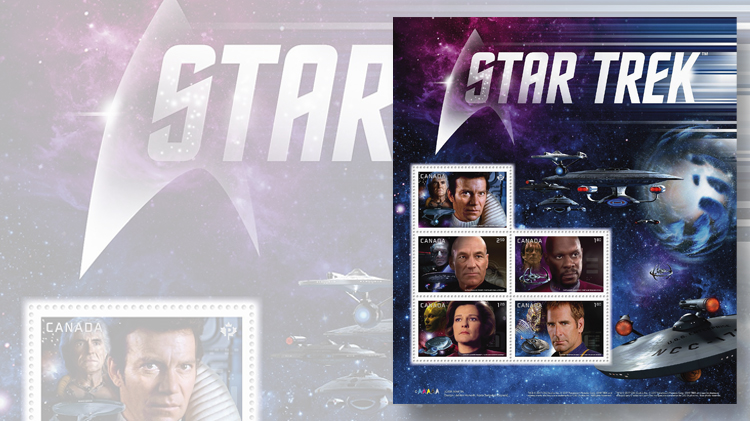 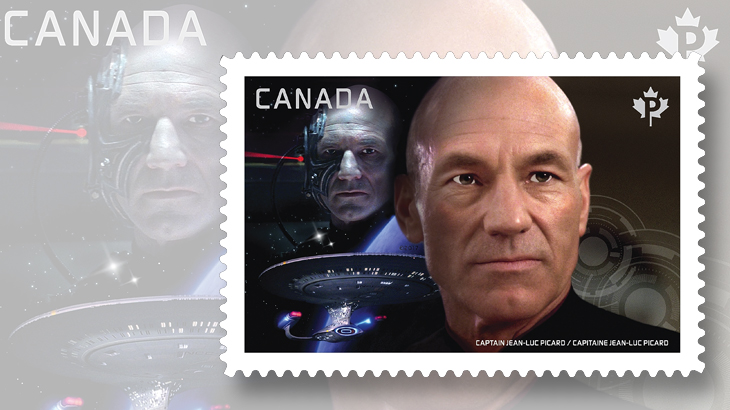 Issued April 27, Canada’s second major issue of Star Trek stamps in as many years may delight the many fans of the science fiction series with five self-adhesive die-cut stamps depicting the commanders, their vessels and their nemeses. All commanders from 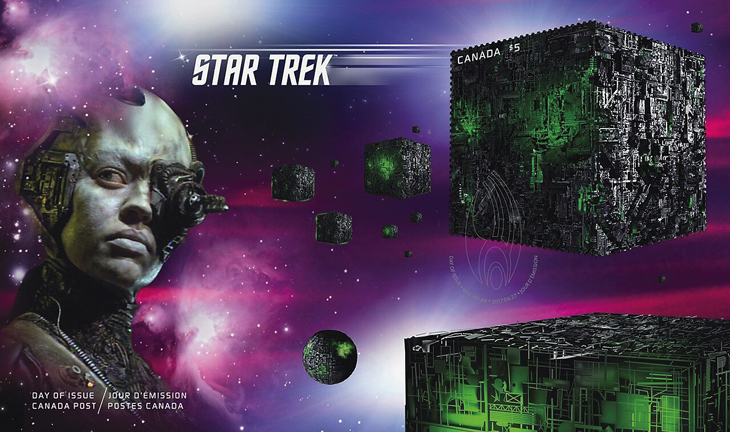 An oversized $5 Borg Cube stamp represents the most implacable foe yet encountered in Star Trek — cybernetic drones without will or individuality, wandering the galaxy in massive cubic vessels to assimilate new creatures into their collective or wipe them
Previous
Next

A formidable fleet of philatelic items and premium-priced Canada Post keepsakes has assembled for the release of Star Trek Year 2, Canada Post’s code name for its April 27 sequel to the widely promoted and creatively crafted stamps issued May 5 last year (Scott 2911-2922).

The 2016 set celebrated the 50th anniversary of characters who made famous the original TV series that debuted in the United States and Canada in September 1966.

That first issue was detailed by Michael Baadke in Linn’s here, here, and here, because Canada Post took its time revealing all the details.

This year, what Canada Post is calling Star Trek Year 2 chiefly depicts the commanders, their vessels, and their arch-nemeses of the best-known film adaptation of the original series and four of its TV spin-offs on five die-cut, self-adhesive permanent-rate stamps paying Canada’s domestic letter rate (currently 85¢).

These begin with a stamp honoring USS Enterprise (NCC-1701) commanded by Admiral James T. Kirk (played by Montreal-born William Shatner, the principal Canadian connection to the series), vs. the “genetically enhanced superhuman” Khan Noonian Singh, from the 1982 motion picture Star Trek II: The Wrath of Khan.

Khan was reprised in the film by actor Ricardo Montalban 15 years after he had first played that role on Space Seed, a 1967 episode from the original 1966-69 Star Trek television series.

Capt. Jean-Luc Picard (Patrick Stewart) was memorable at the helm of the USS Enterprise-D (NCC-1701-D) in the second TV series, Star Trek: The Next Generation (1987–94), and four subsequent feature films.

The nemesis portrayed on the stamp is in fact Picard himself, transformed to serve as Locutus, a servile emissary of the Borg in its attempts to assimilate and dehumanize the rest of the Enterprise crew. The Borg used control by electromechanical implants to turn organic beings into drones to do their bidding, exterminating all other life in their conquests.

Star Trek Voyager, the fourth TV series (1999-2001) also was named for its vessel, Voyager (NCC-74656), helmed by Capt. Kathryn Janeway (Kate Mulgrew). On its first mission, according to the StarTrek.com database, a “powerful alien technology” pulled Voyager and “a renegade Maquis vessel” in the distant Delta quadrant, 70,000 light-years from Earth, making returning home the principal ongoing mission of the series.

The adversary pictured on her stamp is the ruthless Borg Queen (Alice Krige), who had overseen Picard’s conversion to Locutus. In the final episode of the series, Janeway destroys the Borg Queen.

Star Trek: Enterprise also portrayed the first interstellar conflict between humanity and aliens. The Xindi were creatures of six races from a single distant planet that attacked Earth, personalized in the series by reptilian Commander Dolim (Scott MacDonald), whom Archer slays.

Rounding out the issue are two very different stamps depicting very different but memorable spacecraft from the science fiction series. The first is a permanent-rate coil stamp picturing the Enterprise’s small but versatile Class F shuttle Galileo (NCC-1701/7), printed in a coil of 50 stamps, available with a special Enterprise coil dispenser in the shape of a Canada Post mailbox.

Collectors can also buy coil strips of four or 10. As was true of the self-adhesive backing liners on last year’s Star Trek coil stamps, “Famous quotes from the series are revealed on the back of the coil.” Only 300,000 were printed.

The second is an oversized $5 stamp picturing the Borg Cube, an intimidating colossus measuring three kilometers on each side. Embossed, debossed, and enhanced with foil for a 3D effect, this oversized stamp is available only in the prestige booklet and as one in a set of seven official 2017 Star Trek first day covers.

Designed by Kosta Tsetsekas and Adrian Horvath of Signals Design Group in Vancouver, British Columbia, Canada Post says “these stamps share a similar look to those issued in 2016, with a more modern feel.”

According to Horvath, “The ships, the captains and, especially, the villains give these stamps more drama.”

The five commemoratives will be sold as permanent-rate, self-adhesive stamps in booklets of 10 with a cover design showing the five commanders rendered as though beaming down. These were printed in four-color offset lithography by Lowe-Martin.

Also available will be a $7.35 pane of five perforated stamps with moisture-activated gum in various denominations: the Kirk stamp remains at permanent rate (85¢), while the other stamps are $2.50 (Picard), $1.80 (Sisko), $1.20 (Janeway) and $1 (Archer). These were printed in five-color offset lithography by Lowe-Martin.

The Star Trek prestige booklet from Canada Post contains all the stamp designs in perforated format in two panes with different layouts, with the commemoratives denominated the same as the perforated stamps in the pane of five, as well as the $5 Borg Cube stamp.

The prestige booklet sells for $21.95 Canadian (approximately US$16). Each pane in the booklet shows different full-color scenes from the television series and includes text describing the action in English and in French. Canada Post printed 75,000 prestige booklets.

Also available are sets of first-day covers (15,000 produced) and picture postal cards. The seven first-day covers display the seven permanent-rate stamps with full-color photo illustrations as cachets, plus popular Star Trek: Voyager character Seven of Nine (Jeri Ryan) depicted as a Borg drone on the $5 Borg Cube FDC, and a cutaway view of the shuttle on the permanent-rate Galileo FDC. All first-day covers are postmarked in Vulcan, Alberta, with the exception of the Montreal-postmarked Kirk FDC.

The five picture postal cards are franked with the Star Trek franchise’s delta logo, the title of the movie or series, and five images adapted from top-rated moments or episodes in each, with imprinted versions of each of the five stamps depicting a commander.