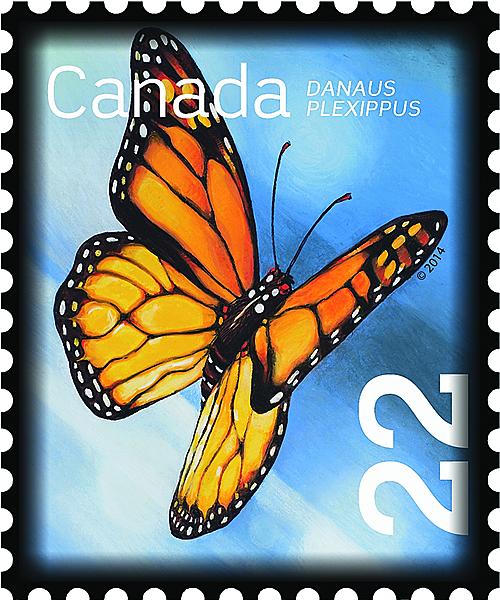 Canada issued a 22¢ Monarch Butterfly stamp March 31 as a make-up rate stamp for new postage rates that started that day.

Canada’s domestic letter rate increased dramatically on that date, changing from 63¢ to 85¢.

This new stamp, part of the Beneficial Insects definitive series, was issued in panes of 50.

The Beneficial Insects stamps are designed and illustrated by Keith Martin. He stated in Canada Post’s Details magazine that the new stamp design “ … let me take the 2009 two-cent stamp, which depicted the monarch caterpillar, literally to the next level.”

The 22¢ stamp joins other low-value definitive stamps issued in the series between 2007 and 2012.

Canadian Bank Note printed the new Monarch Butterfly stamp by five-color offset lithography on Tullis Russell paper, with general tagging on all four sides. The stamp is perforated and has PVA gum.

As definitives, the stamps will be in continuous printing as needed.

Canada Post will service 17,400 official first-day covers franked with the stamp. The FDC will have a Pelee Island, Ontario, postmark and is Canada Post item 420022121.