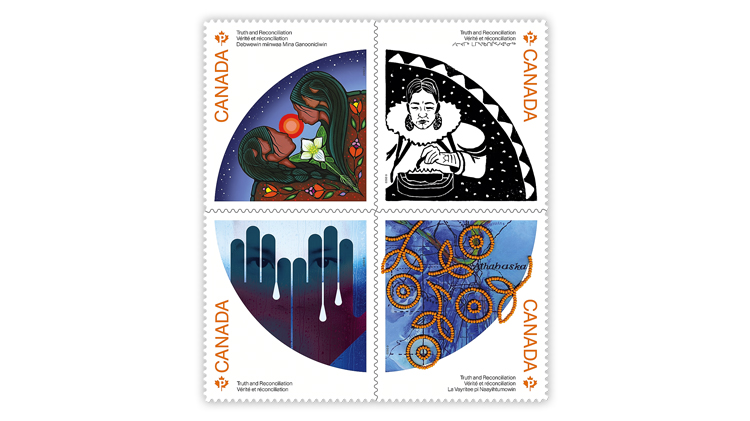 On Sept. 29, Canada Post issued four Truth and Reconciliation stamps. These stamps begin a planned annual series to encourage awareness and reflection on the need for healing and reconciliation due to the tragic legacy of Indian residential schools in the country.

The set is being issued in connection with the Sept. 30 National Day for Truth and Reconciliation, which recognizes those who never returned from Indian residential schools, those who survived, and the families and communities involved.

Beginning in the 1830s until as recently as the 1990s, more than 150,000 First Nations, Inuit and Metis children across Canada were taken from their families and placed in Indian residential schools, according to Canada Post.

“They were stripped of their languages, cultures and traditions,” Canada Post said.

“Children endured unsafe conditions, disease, and physical, sexual and emotional abuse while at the church-run schools. Thousands of them never made it home.”

Survivors from these schools continue to experience trauma, which is then passed down to successive generations, Canada Post said.

The Truth and Reconciliation stamps come in booklets of eight and are presented in se-tenant (side-by-side) blocks of four. Each stamp shows an image in a 90-degree arc. The images form a circle when the stamps are shown together.

A different artist contributed to the design on each of the stamps. Some of the stamps showcase First Nations, Inuit and Metis artists.

A letter P inside a maple leaf next to this text signifies that the nondenominated stamps pay the permanent rate for domestic letters weighing up to 30 grams (currently 92¢).