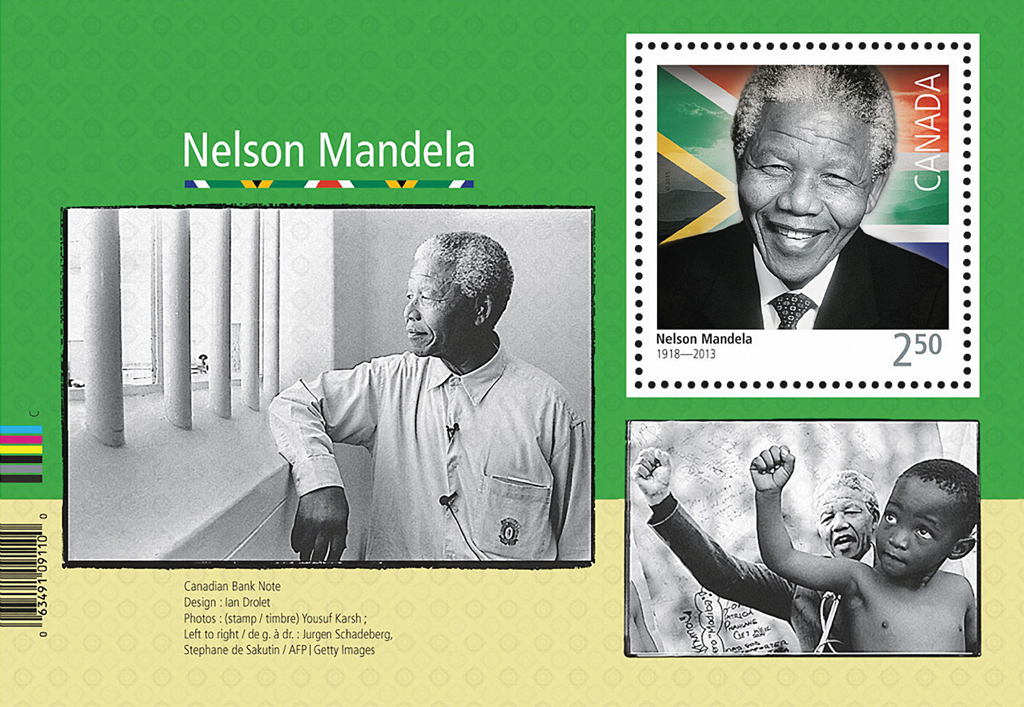 This nondenominated (85¢) permanent-rate commemorative stamp was issued in booklets of 10 Jan. 30 for Black History Month (February). A souvenir sheet containing a $2.50 international-rate stamp with the same design was released at the same time.

A leader of the anti-apartheid movement in South Africa and that country’s first black and first democratically elected president, Mandela also was an advocate for human rights around the world.

Canada Post said, “Amid his 27 years in prison, Mandela became a symbol of the moral fight for freedom, equality and justice in South Africa and around the world.”

The design of the new stamp was inspired by a photograph taken by Armenian-Canadian photographer Yousuf Karsh during Mandela’s first visit to Canada in 1990, just four months after his release from prison.

Shown in the background of the design is South Africa’s flag and a photograph of a South African mountain landscape.

The six-colored flag was first flown May 10, 1994, the day Mandela was inaugurated as president.

The photograph by Jurgen Schadeberg on the left side of the sheet was taken in 1994 when Mandela was visiting the prison on Robben Island.

In 2007, Schadeberg said of this photograph: “We believe it was Mandela’s first official visit after his release from prison in 1990 and obviously an emotional visit when he returned to the 2 × 2.5 meter [7 feet by 8 feet] cell where he spent 18 years of his 27 year sentence. This was where he studied, did pushups and reflected on the goal of the liberation of his people. He looked out of the bars, and when he thought I had finished taking pictures, relaxed somewhat, and turned around to smile.”

Stephane de Sakutin, an Agence France-Presse (AFP) photographer, took the photograph shown on the right side of the sheet.

Getty Images describes the image: “A young member of the Maitibolo Cultural Troupe poses on July 14, 2013 in front of a photograph of former South African President Nelson Mandela outside the Medi Clinic Heart Hospital in Pretoria …” Mandela was being treated at the hospital at the time.

In the press release announcing the stamp, Canada Post thanked the Nelson Mandela Foundation for its cooperation and assistance in the creation of the stamp issue.
Canada Post’s official first-day cover is canceled in Ottawa, Ontario.

The cachet shows a classroom photograph with Mandela, circa 1938, and includes a quote from him, “The greatest glory in living lies not in never falling, but in rising every time we fall.” The quote is written in both English and French on the FDC.

Mandela was made an honorary citizen of Canada in 2001 during his third visit to the country. He was the first living person to receive this honor.

In a press release from Canada Post, Canada’s Citizenship and Immigration Minister Chris Alexander said: “Nelson Mandela, an honorary Canadian citizen, is an inspiration to everyone who values human rights. As a great champion of freedom, beloved by Canadians, he will forever be remembered as a man whose courage changed not just South Africa, but also the world.”

The 2014 stamps feature the communities of Africville in Halifax, Nova Scotia (Scott 2702) and Hogan’s Alley in Victoria, British Columbia (2703).