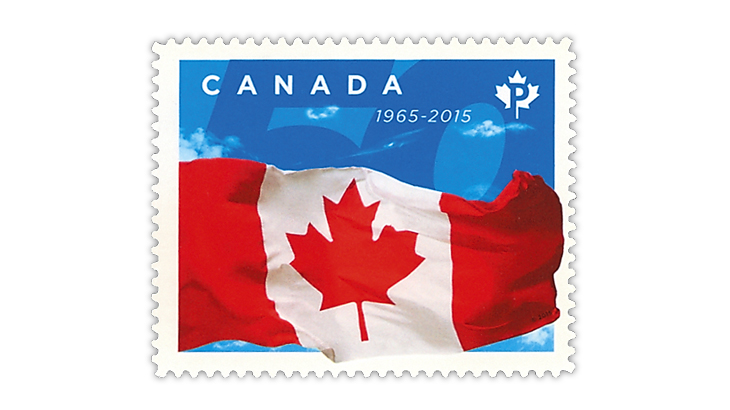 Canada Post recently announced proposed rate increases for 2020. The price for permanent-rate stamps, such as this 2015 Canadian Flag stamp, would increase by 2¢.

Canada Post has proposed a 2¢ increase in its domestic letter rate to go into effect Jan. 13, 2020.

According to a June 14 press release from Canada Post, rate increases also were proposed for mail to the United States, international mail and domestic registered mail.

The rate for mail from Canada to the United States would increase 3¢, from $1.27 to $1.30, according to a chart published in the June 15 issue of Canada Gazette, the official newspaper of the government of Canada.

The price of a domestic-rate stamp for letters weighing up to 30 grams varies in Canada depending on how the stamp is purchased; stamps purchased as singles cost more than those purchased in booklets, coils or panes.

On Jan. 14 of this year, Canada Post increased the basic domestic rate for stamps purchased in booklets, coils or panes from 85¢ to 90¢. Under the new proposal, the rate would be 92¢.

In its press release, Canada Post said the estimated impact of the rate increase on the average household would be under $1 a year and about $6 a year for small businesses.

Canada Post recommended purchasing its permanent stamps (the equivalent of forever stamps in the United States) at the current rate in advance to offset these increases.

The public notice in the Canada Gazette said: “In total, the regulated rate proposal would generate approximately $9 million of additional gross revenue for Canada Post.

“Letter mail volumes continue to decline on account of electronic substitution and changing behaviour of mailers and consumers.

“Despite these proposed increases, Canadians will continue to enjoy postage rates that are comparable to those of other industrialized countries even with Canada’s vast geography, low population density and challenging weather.”

The Canadian public was given 30 days to comment on the rate proposals.