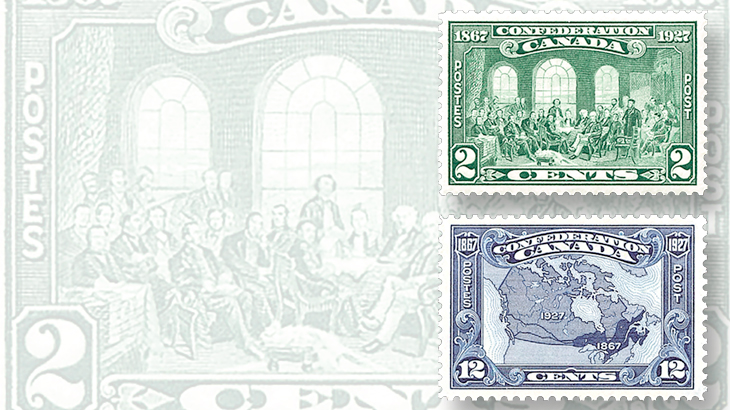 Next year is the 150th anniversary of the British North America Act that brought Canada into being as a unified and largely self-governing nation, and there are hints that Canadian stamps to be issued in 2017 will be part of the celebration. The two historical commemoratives shown here hailed the 60th anniversary of Canadian confederation in 1927: a 2¢ stamp depicting the Canadian politicians known as the Fathers of Confederation (Scott 142), and a 12¢ Canadian Map stamp contrasting the nation’s size in 1867 with its vast extent in 1927 (145).

This headlines a brief review by Jim Phillips, Canada Post’s stamp services director, that brims with information about what’s in store for collectors next year.

“First, we’ll wrap up the UNESCO World Heritage Sites series with a final year of definitives, crow about the Year of the Rooster and honour Black History month with a stamp featuring Mathieu da Costa — thought to be the first African to set foot on Canadian soil,” Phillips said.

An early 17th-century contemporary of Samuel de Champlain, da Costa worked as a translator. He is believed to have spoken English, French, Dutch, Portuguese, and pidgin Basque, the latter used by some Canadian Indians for trading with Europeans.

Phillips also mentioned that daisies would be featured on stamps to be issued in March.

In April, a commemorative issue will mark the 100th anniversary of the Battle of Vimy Ridge. The World War I battle in April 1917 was the first time all four Canadian divisions from across the country fought together for a common goal and achieved victory. The battlefield in northern France is the site of the largest Canadian war memorial ever built.

Canada Post will conclude its Photography series in 2017 and will issue stamps showcasing Canadian opera.

Two hockey centennials will be celebrated on Canadian stamps to be issued later in the year. The National Hockey League and the Toronto Maple Leafs were both founded in 1917.

The 2017 program also will include a Community Foundation semipostal stamp and a Christmas issue.

The biggest news has few details, and is sprinkled throughout Phillips’ prologue, which begins by noting that 2017 is “Canada’s 150th birthday,” and concludes with, “We’ll be celebrating Canada’s special year with a few other surprises along the way. We think it’s going to be a super sesquicentennial for stamps.”

Next year will mark the 150th anniversary of the enactment of the British North America Act in London by the British Parliament in 1867, which created the structure and principal components of the government of Canada to this day.

On the 50th anniversary in 1917 amid WWI, Canada issued a 3¢ stamp (Scott 135) depicting the Fathers of Confederation, 36 men who attended three conferences in 1864-66 that laid the groundwork for the British North America Act.

A decade later the design, based on an 1884 painting by Robert Harris, was reworked slightly and issued as a 2¢ stamp (Scott 142), one of a number of historic stamps commemorating the event (Scott 140-148).

Another of these stamps is a 12¢ Canadian Map (Scott 145) boldly inscribed “CONFEDERATION” and contrasting Canada’s limited size in 1867 with its enormity in 1927 as the second-largest nation on earth.

Will 2017 see a reprise of these and comparable 21st-century commemoratives recalling the origins of Canadian self-rule? Jim Phillips isn’t saying, so we’ll just have to wait to find out.