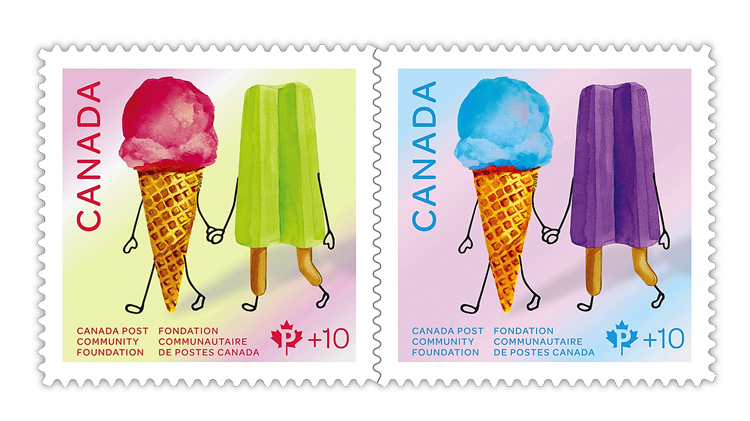 Canada Post said: “A popular staple of childhood fun is enjoying a frozen treat on a hot summer day. The whimsical images on these colourful stamps serve as a reminder that growing up should be full of fun and sweet memories.”

The stamps are part of an annual semipostal series that began in 2012 with the establishment of the Canada Post Community Foundation. The foundation gives out grants to charities, organizations and schools to help children in communities across Canada.

“Over the past eight years, the Foundation has granted more than $8 million to hundreds of initiatives,” Canada Post said. “They include literacy and language programs, youth outreach services, gender and sexual diversity programs, arts and recreation projects, special education programs, childhood health programs, anti-bullying initiatives, mentoring programs and many others.”

According to Canada Post, 118 groups across the country will receive funds to help children this year.

One way the Canada Post Community Foundation raises money is through the sale of its semipostal stamps and related first-day covers.

Starting with the first stamp in the series issued Sept. 17, 2012 (Scott B19), all of the semipostals have been nondenominated permanent-rate stamps with a 10¢ surcharge, indicated by a +10.

On the new stamps, the “P” inside a maple leaf representing the permanent rate (currently 90¢) and the +10 appear in the lower right corner of each design. This inscription matches the color of the ice cream shown on the stamp.

For example, the inscription is in pink on the stamp depicting a cone with a scoop of pink-colored ice cream. On this design, the cone is holding hands with a lime green ice pop. Both the cone and the ice pop have stick figure arms and hands. The cone has legs and feet, while the ice pop has feet on the ends of its two sticks.

On the other stamp, the inscription is in blue, as is the ice cream. The ice pop is purple.

Canadian Bank Note printed the stamps in booklets of 10 by six-color lithography. Symbolic ice pops shown in the lower right of the booklet pane represent the six colors.

The booklet (Canada Post product number 414119111) sells for $10, with the extra $1 going to the Canada Post Community Foundation.

The Canada Post first-day cover (product number 414119131) sells for $3, with the extra 20¢ going to the foundation. The Ottawa, Ontario, first-day cancel features a line drawing of a soft serve ice cream cone. Images of the cones from the stamps are repeated on the envelope.