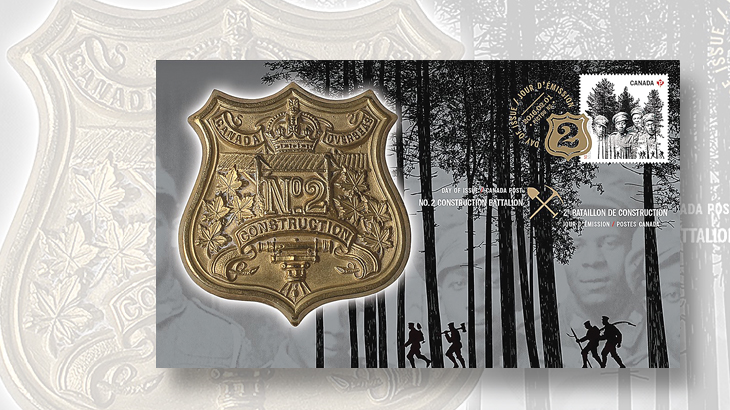 The gold postmark on this first-day cover for Canada’s 2016 No. 2 Construction Battalion stamp was a special service available only on the official first-day covers made and sold by Canada Post.

This year marks the 50th anniversary of the beloved television series Star Trek. Both the United States and Canada are issuing stamps to mark the occasion: the U.S. Postal Service’s stamps are expected sometime around Sept. 8, the anniversary of the first broadcast in 1966, and Canada Post’s set was issued May 5.

Many first-day cover collectors may prefer the Canada Post designs and would like to service their own FDCs with the stamps.

Although Canada Post produces its own cacheted covers, it is possible for individuals to submit their own covers.

However, there are some notable differences from how the USPS services customers’ own FDCs.

Like the USPS, Canada Post gives collectors (servicers) a 60-day grace period after the date of issue, and sufficient postage must be affixed to meet current mailing rates. If the FDCs are being returned in another envelope, that means the first-class domestic rate. If the FDCs are being mailed individually, then the current rates prevail.

All FDCs for servicing by Canada Post, however, must be submitted to the FDC canceling unit at the National Philatelic Center, 1-133 Church St., Antigonish, NS B2G 2R8, Canada, and not to the first-day cities. The street address recently changed, so if you have sent cachets previously to Canada Post for servicing, be sure to note the new address.

Canada Post will not cancel covers that “bear foreign postage or previous cancellations.” That means no combination FDCs with another country’s stamps, such as the 1999 U.S. Star Trek stamp (Scott 3188e).

Earlier Canadian stamps, however, are acceptable for combination covers.

A dual-canceled U.S./Canada FDC is possible, if the Canadian stamps and cancel are applied first.

That will be easy to do, with several months between the release of the Canada and the U.S. Star Trek stamps, but some planning that takes advantage of the 60-day grace period will be required if you try to make a combo FDC when the U.S. stamp is being issued first or on the same day.

Canada strongly prefers that its stamps be in the traditional upper-right corner of the envelope.

As I’ve already mentioned, Canada Post produces its own cacheted FDCs, and they are quite attractive. Amateur cachetmakers intending their FDCs for sale will be competing against Canada Post’s professionals. Also, the “OFDCs” (official first-day covers) as they’re called, often have cancellation varieties that are not available to private servicers.

The gold postmark for the 2016 No. 2 Construction Battalion stamp (Scott 2895, issued Feb. 2) was available only on the OFDC, as shown here. These special covers are produced and serviced by another unit of Canada Post.

There is no minimum number of covers that must be submitted for servicing, and no difference in procedures between dealers and individuals. All orders must be paid by credit card, which takes care of currency conversion. Currently, the exchange rate is about $1 Canadian to 80¢ U.S.

Collectors servicing covers for the U.S. issues being issued at World Stamp Show-New York 2016 should note that not all stamps released at the show will be available for sale at local post offices.

Some of the issues can be requested by local offices, but others will be available only at the show, or by ordering from USPS Stamp Fulfillment Services or calling the toll-free number, 800-782-6724.