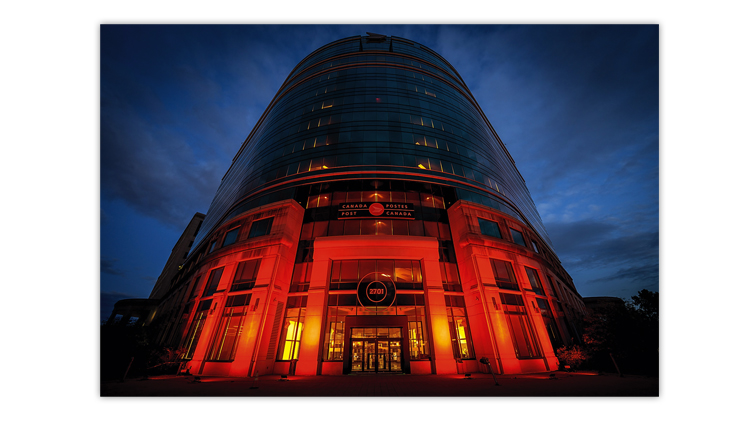 Canada Post is illuminating its head office in Ottawa, Ontario, in orange to commemorate the first National Day for Truth and Reconciliation on Sept. 30, which is also Orange Shirt Day. Starting in 2022, Canada Post plans to issue a new stamp each year in

Canada Post will introduce an annual stamp series in 2022 in conjunction with the National Day for Truth and Reconciliation, according to a Sept. 27 press release.

Canada’s Parliament passed legislation in June to create this federal day of commemoration to “honor the lost children and Survivors of residential schools, their families and communities,” according to the website of the government of Canada. “Public commemoration of the tragic and painful history and ongoing impacts of residential schools is a vital component of the reconciliation process.”

The Canadian Encyclopedia describes these schools “government-sponsored religious schools that were established to assimilate Indigenous children into Euro-Canadian culture.”

In its Sept. 27 press release, Canada Post said that “in keeping with its commitment to the principles of truth and reconciliation” it is working with Indigenous experts for the 2022 stamp.

Doug Ettinger, president and CEO of Canada Post, said: “Canada Post has a long history of sharing important Canadian stories through its stamp program. As a national storyteller and a public institution in virtually every community across Canada, we are committed to supporting the principles of truth and reconciliation.”

“As a country, it is part of our collective duty to acknowledge and honour the experiences of Indigenous peoples and to move forward together, in a spirit of healing. We hope this annual stamp series can help facilitate that.”

The first National Day for Truth and Reconciliation is scheduled to be observed on Sept. 30. This is also Orange Shirt Day, “an Indigenous-led grassroots commemorative day that honours the children who survived Indian Residential Schools and remembers those who did not,” according to the government of Canada website.

The website said: “This day relates to the experience of Phyllis Webstad, a Northern Secwpemc (Shuswap) from the Stswecem’c Xgat’tem First Nation, on her first day of school, where she arrived dressed in a new orange shirt, which was taken from her. It is now a symbol of the stripping away of culture, freedom and self-esteem experienced by Indigenous children over generations.”

In addition to the stamp series, Canada Post has launched other initiatives and plans to introduce more “to mark the National Day for Truth and Reconciliation and support the principles of truth and reconciliation.”

For example, on Sept. 29 and Sept. 30, Canada Post employees are invited to wear orange shirts to work and from Sept. 24 to 30, Canada Post’s head office in Ottawa is being illuminated with orange light.

Also, most of Canada’s postal operations, including all corporate post offices, will be closed Sept. 30

Starting in 2022, the Canada Post Community Foundation will award an annual grant of $50,000 “to a national organization that offers programming anchored in the principles of truth and reconciliation and that supports Indigenous children and youth across the country.”

Canada Post issues a semipostal stamp or stamps each year to raise money for the foundation. Information about this year’s semipostal was reported in the Oct. 4 issue of Linn’s.