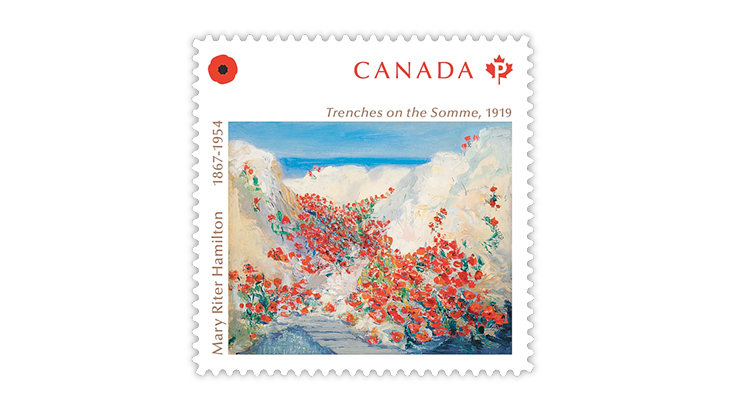 On Oct. 28 Canada Post will honor World War I battlefield artist Mary Riter Hamilton with a new stamp picturing Hamilton’s 1919 painting, Trenches on the Somme. The stamp is being issued in booklets of 10.

World War I battlefield artist Mary Riter Hamilton (1867-1954) will be honored on a new Canadian stamp to be issued Oct. 28. The nondenominated permanent-rate (currently 92¢) stamp will be sold in booklet panes of 10.

In the October issue of its Details magazine for collectors, Canada Post notes that the stamp is being issued to mark Remembrance Day, the Nov. 11 memorial day observed by Canada and other Commonwealth member states in honor of their military members who died in the line of duty.

The stamp pictures Hamilton’s 1919 painting, Trenches on the Somme. The Battle of the Somme was fought in 1916 on both sides of the Somme River in France.

According to Canada Post, “Hamilton developed a reputation as a distinguished painter — and applied to the Canadian War Memorials Fund to be sent to the frontlines as a war artist.”

“Although her application was refused, Hamilton was commissioned by the Amputation Club of British Columbia in 1919 to paint the battered battlefields of France and Belgium for its veterans’ magazine. Hamilton worked endless hours outdoors with poor shelter and little food or money. She produced more than 300 paintings, drawings and etchings of the widespread devastation and arduous reconstruction efforts, and was awarded France’s prestigious Ordre des Palmes academiques in 1922.”

Hamilton endured harsh conditions when she visited the battlefields after the war ended in 1918.

The website of the Canadian Encyclopedia quotes from a 1922 interview in which Hamilton explained what impelled her to work in such a dangerous environment: “I made up my mind that where our men went under so much more dreadful conditions I could go, and I am very proud to have been able even in a small way to commemorate the deeds of my countrymen.”

Today Hamilton’s generosity is on display at the Library and Archives Canada, to which she eventually donated most of her works after returning to Canada in 1925.

In addition to a print quantity of 130,000 booklets, Canada Post produced 7,000 first-day covers for the Mary Riter Hamilton stamp. The covers are postmarked in Teeswater, Ontario, Hamilton’s birthplace. The pictorial cancel features a silhouette of a painting perched on an easel.