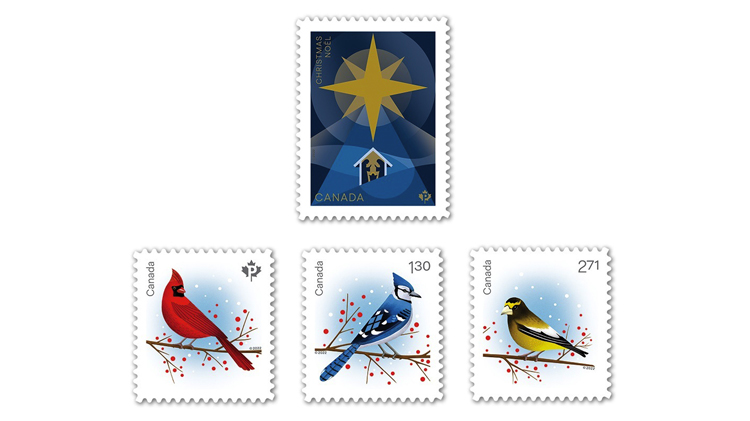 As in other years, Canada Post offers the choice of stamps featuring religious Christmas imagery or secular holiday imagery.

The single religious-themed, permanent-rate Christmas stamp features a large gold star against a blue background and above a stable. The letter “P” inside the maple leaf in the lower right indicates that it is a permanent-rate stamp paying the basic domestic letter rate (currently 92¢).

“In biblical accounts of the birth of Jesus,” Canada Post said in a press release, “the star of Bethlehem served as both a guide that led the Magi [or wise men] to find the young child and a sign that the prophecy of the coming of a saviour had been realized.”

In its Details magazine for collectors, Canada Post noted how scholars and astronomers have searched to identify this star and date the birth of Jesus.

“Still, the star’s origins remain elusive,” Canada Post said in Details, “with findings hypothesizing that it might have been an unusually bright star, a comet, a nova, a supernova – or even a conjunction of planets, an event that would have been seen as a particularly auspicious sign by the learned Magi.”

Canada Post said that the star remains a symbol of divine guidance regardless of its origins.

The three new Holiday Birds stamps depict a cardinal, blue jay and evening grosbeak, each sitting on a branch adorned with red berries. Canada Post said that each of the three birds overwinters in the country.

“Their brilliant colours and visits to backyard feeders brighten the season, and like other birds and animals, they can bring us meaningful messages, which vary by culture or tradition,” Canada Post said in Details.

The stamp showing the cardinal covers the basic domestic letter rate. Cardinals can symbolize devotion, diversity and unity, according to Details.

The Blue Jay stamp is denominated $1.30 for letters mailed to the United States. Canada Post said that this bird symbolizes strength, loyalty and lasting bonds.

The evening grosbeak, depicted on the stamp denominated $2.71 for letters to other international destinations, can inspire healing, forgiveness and harmony, according to Canada Post.

U.S. Christmas stamp to arrive Sept. 22 at Museum of Fine Arts in Boston