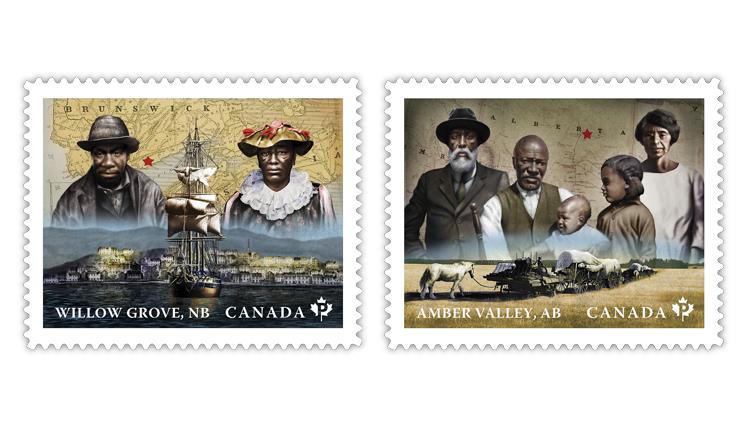 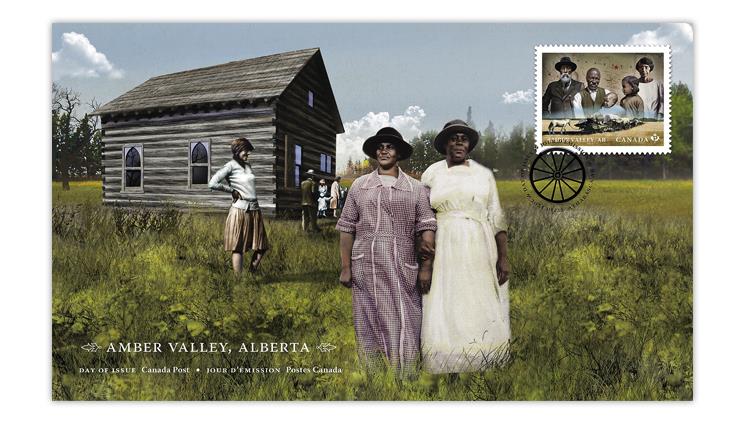 Canada Post’s first-day covers for its new Black History Month stamps show additional scenes of the communities. The Amber Valley FDC depicts community members outside the log structure that served as its first church.
Previous
Next

Both stamps are nondenominated, paying the permanent domestic letter rate (92¢).

In its Details bulletin for collectors, Canada Post said: “Settlers faced immense challenges forging a new life in the rugged Canadian wilderness. But few were as harsh as those endured by many early Black settlers who fled the United States in the early 19th and early 20th centuries to escape the cruelty of enslavement and racial discrimination.

“These stamps — the 13th issue in our Black History Month series — tell the stories of two Black communities nearly one hundred years and thousands of kilometres apart. Both rose from hardship to survive and grow for a time and served as stepping stones for the success of future generations of Black Canadians.”

Willow Grove, located near Saint John, New Brunswick, was founded around 1815 by Black refugees of the War of 1812.

The Discover Saint John website said: “From 1813-1816 the second most important group of Blacks came to the Maritimes. The Black Refugees were escaped slaves, primarily from Virginia and Maryland, who had thrown in their lot with the British during the War of 1812. Approximately 2000 blacks came, with 400-500 settling in New Brunswick and the rest in Nova Scotia. In New Brunswick, they settled in the Willow Grove area near Loch Lomond. The 371 refugees were given licences of occupation for 50 acres of land (per family) in 1817. In 1825, after ten years of struggle, those who remained on the land were given 99 year leases. In 1836 they were allowed to buy title to the land for 20 shillings.”

The community no longer exists, but information found inside a replica of the Baptist church and stone markers at the Black Settlement Burial Ground tell the story of Willow Grove.

One stone marker says that “The Black refugees arrived in Saint John on May 25th 1815 aboard the British warship Regulus.”

The Regulus is shown in the center of the Willow Grove stamp with the skyline of Saint John behind it. The design also shows a map of the location of Willow Grove and two of the community members, a man on the left and a woman on the right.

Canada Post said: “Nearly a century later, Amber Valley, Alberta, was established by 30 Black families who had journeyed from the American South to flee the escalating violence and segregation laws. They faced many of the same challenges as Willow Grove: bone-chilling winters, inhospitable land and the racial discrimination they had hoped to leave behind.”

According to the online Canadian Encyclopedia, Amber Valley was a thriving community between 1911 and the 1940s with a post office, school and baseball team.

The story of the settlement also is told in a short documentary, Secret Alberta: The Former Life of Amber Valley, which won the 2018 Canadian Screen Award for excellence in digital storytelling.

Like the Willow Grove stamp, the Amber Valley stamp includes a map showing its location. The design also depicts five community members — two men, a woman, a baby and a young girl — and another group traveling across the prairie in covered wagons on their way to Amber Valley.

Lara Minja of Lime Design Inc. designed the stamps, using illustrations by Rick Jacobson. The images of the community members shown on the stamps are based on archival photos, according to Canada Post.

The stamps measure 40 millimeters by 32mm. Lowe-Martin printed them by four-color lithography in a quantity of 130,000 booklets of 10.

Canada Post is offering two first-day covers for the stamps.