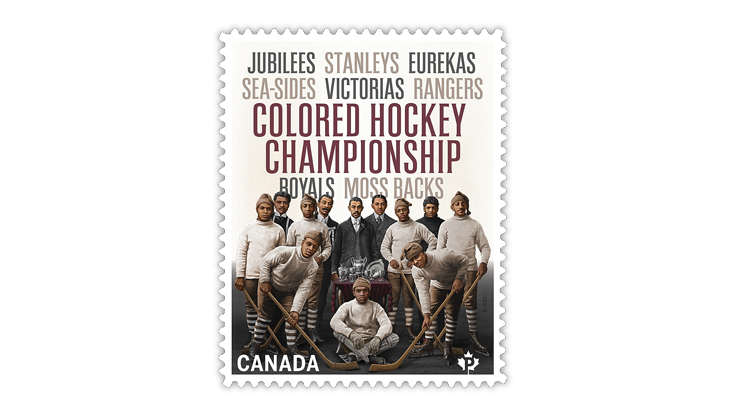 Canada Post issued a Black History Month stamp Jan. 24 commemorating the Colored Hockey Championship and the all-black hockey teams of the Maritime provinces that competed for it in the late 19th and early 20th centuries.

The latest stamp in Canada Post’s Black History Month series pays tribute to the all-black hockey teams in the Maritime provinces that competed for the Colored Hockey Championship between 1895 and the early 1930s.

The Black History Month stamp series began in 2009. The new nondenominated stamp for the permanent domestic letter rate (92¢) in the series was unveiled Jan. 23 at the Black Cultural Centre for Nova Scotia in Cherry Brook, Nova Scotia, Canada. The stamp was issued the next day, Jan. 24.

In announcing this Colored Hockey Championship stamp, Canada Post said that it was “proud to honour the courage of those who organized and played all-Black hockey and helped to make this little-known story part of Canada’s national discussion.”

The organizers were Baptist church leaders who were trying to attract young black men to the church.

The Black Ice Hockey and Sports Hall of Fame Society said on its website: “The Colored Hockey Leagues of the Maritimes was formed in 1895 in Halifax, NS, comprised of the sons and the grandsons of runaway American slaves. The CHL was one of the most complex sports organizations ever formed and was led by Black Baptist Ministers and Church leaders. The Bible was their code of conduct.”

Many of the players and other men associated with these all-black hockey teams have been inducted into that society’s hall of fame.

The stamp features an illustration of the Halifax Eurekas, the Colored Hockey Champions in 1904. This illustration by Ron Dollekamp is based on a historical photograph.

Canada Post explained: “There was no predetermined game schedule. Rather, teams challenged each other to matches by telegraph or by placing ads in local newspapers. Organizers, players and newspapers of the day called the ultimate prize the Colored Hockey Championship, a term not in use today, but which the stamp issue retains because it is historically accurate.”

Canada Post also said that the stamp acknowledges some of the league’s contributions to hockey, “including some of the earliest recorded uses of down-to-the-ice goaltending.”

“Due to the exciting style of the play, the CHL would eventually draw more spectators than the white leagues, with the audience reaching as high as 1,200 fans in 1905,” according to a report by Ben Cousins on the website of CTV News.

Designed by Lara Minja of Lime Design, the stamp measures 32 millimeters by 40mm. Lowe-Martin printed it by offset in booklets of 10. The print run was 140,000 booklets.

The same illustration is included on the booklet pane with the following description, “The Halifax Eurekas may have practised on Egg Pond, near the Halifax Citadel.” The citadel can be seen in the background.