Canada’s Magi booklet stamps printed on the wrong side 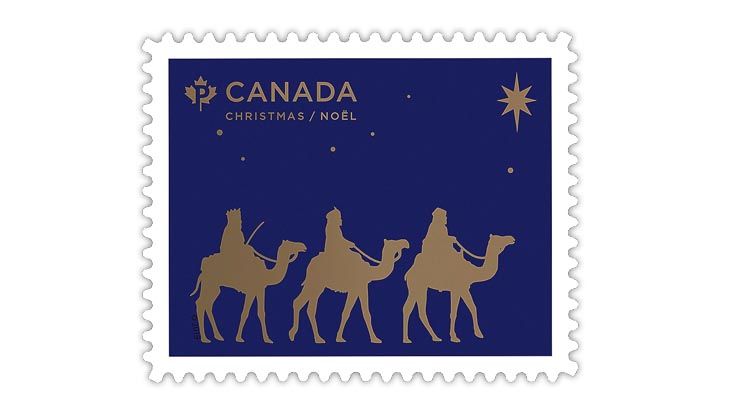 Canada Post recalled the booklets of 12 of its Magi Christmas stamps issued Nov. 4 because the stamp design was printed on the wrong side. The booklets have been returned to sale.

Canada Post recalled the booklet of 12 Magi stamps shortly after the Nov. 4 issue date because the stamp design was printed on the wrong side.

This nondenominated, permanent-rate self-adhesive Christmas stamp shows a silhouette of the Magi (the three wise men) on camels (Linn’s, Nov. 18). Other Canadian Christmas stamps issued at the same time were not affected by the recall.

Canada Post’s Nov. 19 press release announcing the recall of the Magi booklet said that “we have detected that some of them may be defective.”

“We apologize for this error and are working to reprint and restock the item and expect to have replacement booklets available for sale online on Friday, November 22 and in stores early the week of November 25,” Canada Post said.

In the press release, Canada Post described the error, “During production, it appears some of The Magi booklets were printed improperly, with the glue sticking to the booklet rather than the stamps.”

“We are working with the printer to determine the cause of the error and implement process improvements,” Canada Post added.

A similar error occurred on booklets of Canada’s permanent-rate stamp issued April 20, 2018, to honor the 65th anniversary of the coronation of Queen Elizabeth II (Scott 3098), although those booklets were not recalled.