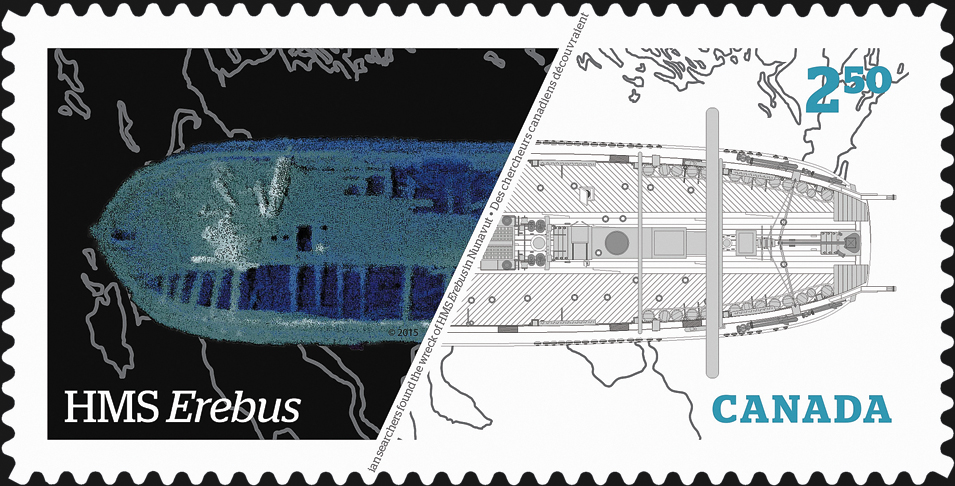 The $2.50 international-rate stamp in the Franklin Expedition issue features part of a diagram of Erebus with a sonar image of the sunken ship, finally found in September 2014 after a search that first got underway in 1848. 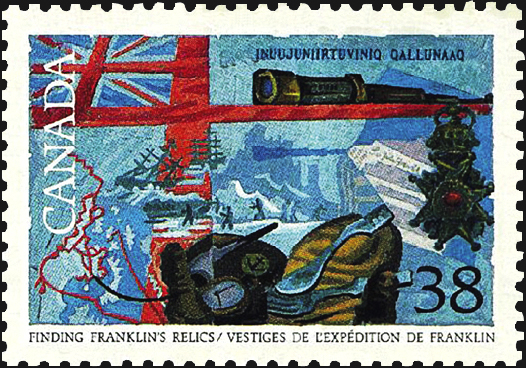 This 1989 38¢ Exploration of Canada stamp (Scott 1234) inscribed “Finding Franklin’s Relics” shows artifacts carried by the survivors of the lost mission against the background of a British naval ensign and a scene of Franklin’s ships trapped in the ice. 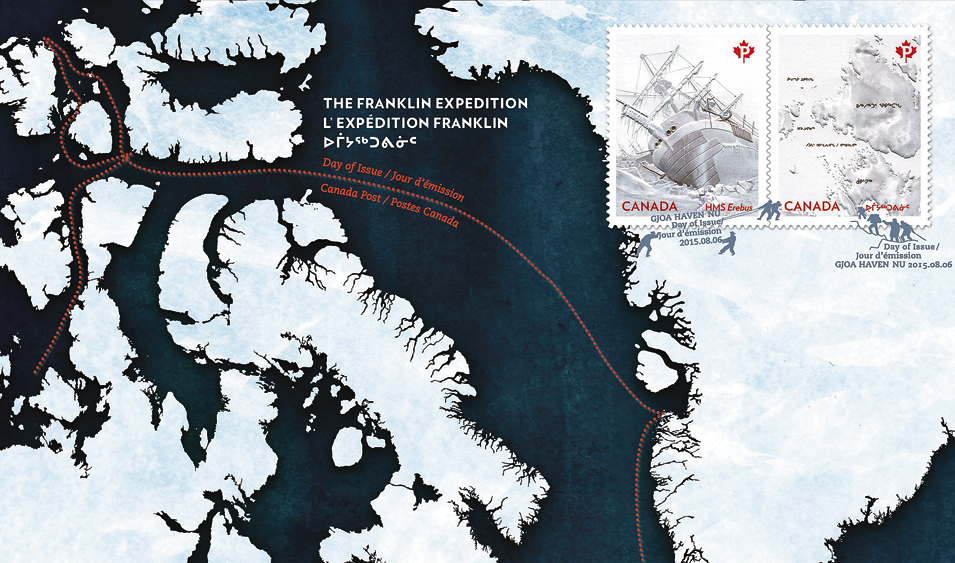 Canada Post’s official first-day cover for the se-tenant pair shows a detailed map of John Franklin’s 1845 search for a Northwest Passage, with a dotted line in red tracking the ill-fated voyage to its conclusion. 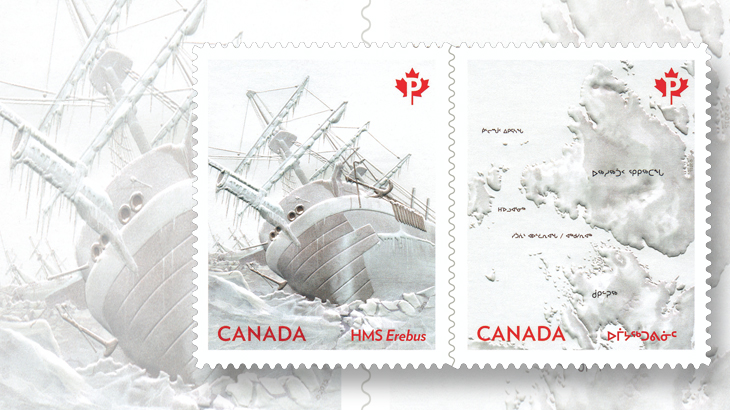 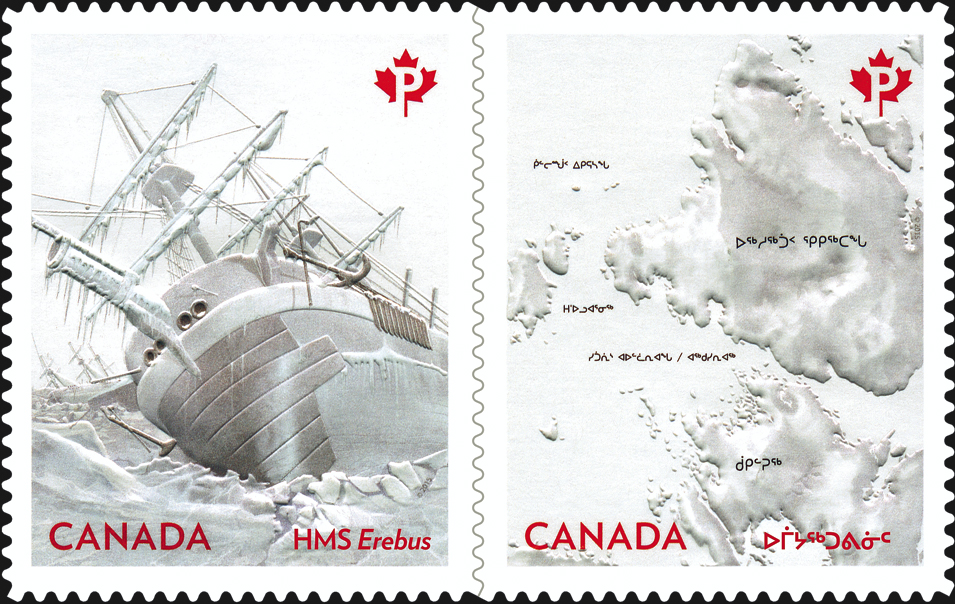 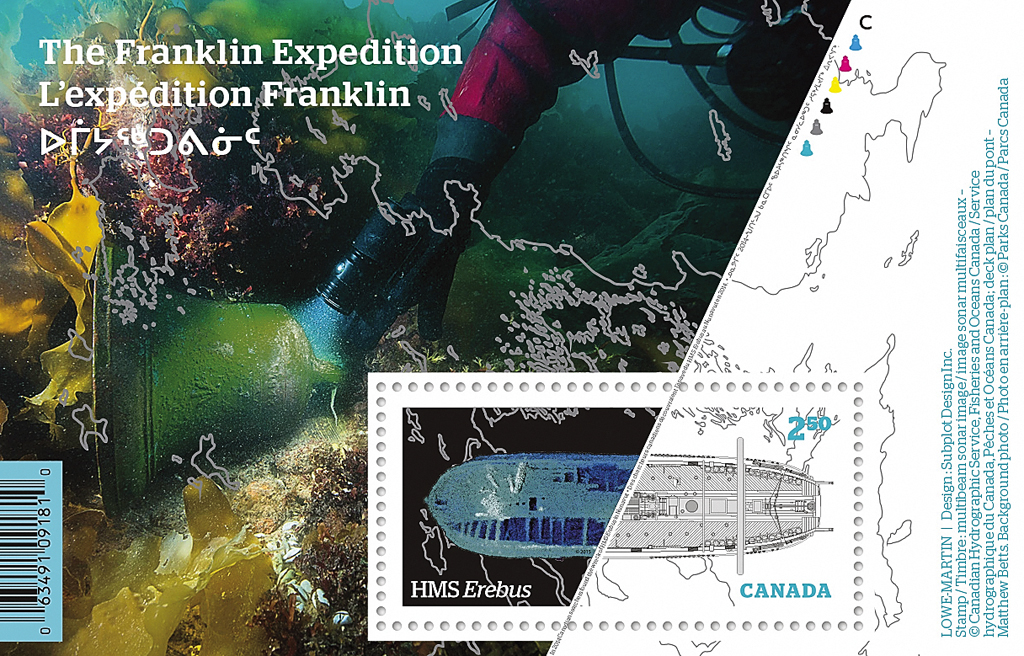 In a special ceremony July 22 at the Maritime Museum of the Atlantic in the historic port of Halifax, Nova Scotia, Canada Post unveiled stamps commemorating John Franklin’s ill-fated 1845 search for the Northwest Passage and the discovery in September 2014 of the sunken remains of his expedition’s flagship HMS Erebus.

The three stamps — a pair of nondenominated “P” stamps paying Canada’s domestic letter rate (currently 85¢), and a $2.50 stamp paying the international letter rate — will be issued Aug. 6. The stamps will be available in self-adhesive and moisture-activated adhesive formats.

“The mystery of Franklin’s expedition has long captured the imaginations of Canadians,” said Canada’s Minister of Justice Peter MacKay. “These stamps reflect Canadians’ pride in the technology — and traditional Inuit stories and knowledge — that made the discovery of Erebus possible.”

“Canadian stamps have a long history of celebrating our great explorers,” says Deepak Chopra, Canada Post president and CEO. “These stamps honor Franklin and his bold men, but also celebrate the discovery of a shipwreck that had eluded previous and perilous searches: the long-lost Erebus.”

The se-tenant pair of permanent stamps were designed by Roy White of Vancouver-based Subplot Design Inc., with innovative illustrations from Mike Little of Halifax, who has worked on other Canadian stamps including the 2012 Titanic issue.

A white background and high-relief embossing give the stamps the look of having been carved from the very ice that trapped Franklin and his men 170 years ago.

The first stamp shows Erebus with the masts of her companion ship HMS Terror in the background at left.

The second stamp features a map of the Arctic region that Franklin explored and uses inscriptions in the native Inuktut language to mark key places in the region. This reflects the Inuit oral history that guided many searches for the ships, including last year’s successful discovery.

Extensive use of Inuktut text on a stamp from famously bilingual Canada is unusual, but not unprecedented.

A stamp from the Canada’s First People se-tenant block of four in the 2000 Millennium commemorative series bears an inscription in Inuktut, along with “Canada” and the denomination “46.” The stamp shows a native sculpture, with text in English and French celebrating “The Powers of the Inuit Shaman” in the adjacent margin only (Scott 1826c).

The main island at the center of the map shown on the second stamp was known in Franklin’s time as Prince William Land, or Prince William Island. Most of the remains believed to be from the crew of the Erebus, from formal burial sites to random human remains, have been found at a dozen different sites scattered around the western and southern coasts of this island.

The land jutting towards it from the south — from what were the Northwest Territories and is now Nunavut — is the Adelaide Peninsula, narrowly separated from the island by the Simpson Strait.

To the west, the Victoria Strait separates Prince William Island from the much larger Victoria Island, the easternmost tip of which appears at far left on the stamp.

The one crucial item missing from the stamp is the precise location of the long-lost wreck of Erebus. This was deliberately done to protect what had hitherto been called “the only unknown national historic site in Canada,” declared as such in 1992.

Now that the resting place of Erebus at last has been discovered, the protection and careful excavation of its valuable artifacts remain key concerns, hence the secrecy regarding its exact whereabouts.

On the southeast coast of Prince William Island — just off the map on the stamp — is its only regular habitation: Gjoa Haven, population 1,279. Early 20th-century polar explorer Roald Amundsen of Norway named the hamlet after his ship Gjoa, a Norse term meaning “beautiful god.”

Ironically, it was Amundsen‘s Gjoa, a small sloop with a skeleton crew of six, that became the first vessel ever to transit successfully the Northwest Passage in 1906, after an arduous three-year voyage.

A pragmatically minded people, the Inuit refer to the settlement as Uqsuqtuuq, meaning “lots of fat,” alluding to the abundance of sea mammals in the Arctic waters nearby.

Gjoa Haven, Nunavut, will be the official first-day postmark site for this Franklin Expedition issue.

The $2.50 international-rate stamp, also designed by White, combines Matthew Betts’ illustration of the deck plan of the Erebus with a modern sonar image from the wreck from the Canadian Hydrographic Service of Fisheries and Oceans Canada.

The accompanying souvenir sheet with a single $2.50 stamp features an underwater photo provided by Parks Canada of the ship’s bell from Erebus, as discovered by divers.

According to Canada Post, “a special phosphorescent ink on the [souvenir sheet] stamp enhances the sonar image, while a metallic ink lends sheen to the bell.”

The two vertically formatted permanent stamps measure 40 millimeters by 32mm and are available as die-cut self-adhesives in booklets of 10. In all, 250,000 booklets were printed by Lowe-Martin Group in six-color offset lithography and have been embossed.

A total of 15,000 official FDCs for the stamp pair, canceled in Gjoa Haven, Nunavut, are available.

Available in 130,000 booklets of six, $2.50 international-rate stamps measuring 25mm by 50mm also were printed by Lowe-Martin in six-color offset lithography, with the addition of a phosphorescent ink to enhance the sonar image.

This is not the first time the Franklin Expedition has been commemorated on Canada postage. As part of the concluding quartet in its Exploration of Canada series in 1989, Canada issued the 38¢ stamp shown nearby (Scott 1234), sadly inscribed “Finding Franklin’s Relics.”

The stamp shows recovered artifacts carried by the short-lived survivors of the lost mission — a telescope, a medallion, a clay pipe stem, pocket watch and silverware — against the background of a British naval ensign and a scene of Franklin’s ships trapped in the ice.