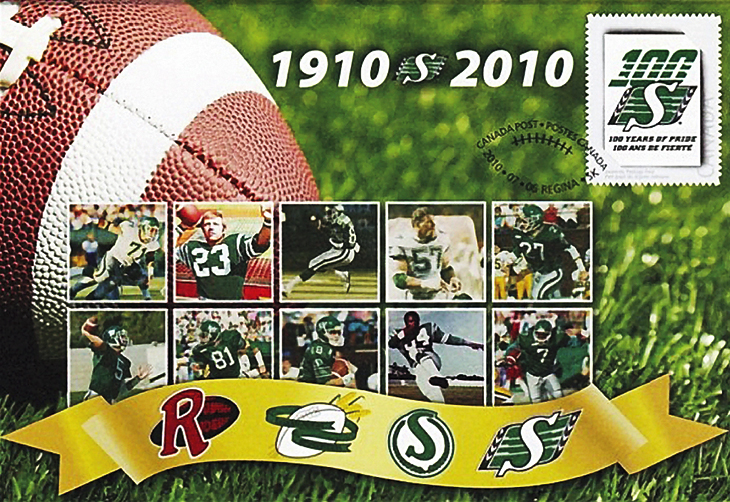 In 2010, the Saskatchewan Roughriders of the Canadian Football League marked “100 Years of Pride” with this colorful cover for fans with a football-shaped postmark, images of the team’s four logos during the century, and photographs of 10 of its greatest stars. 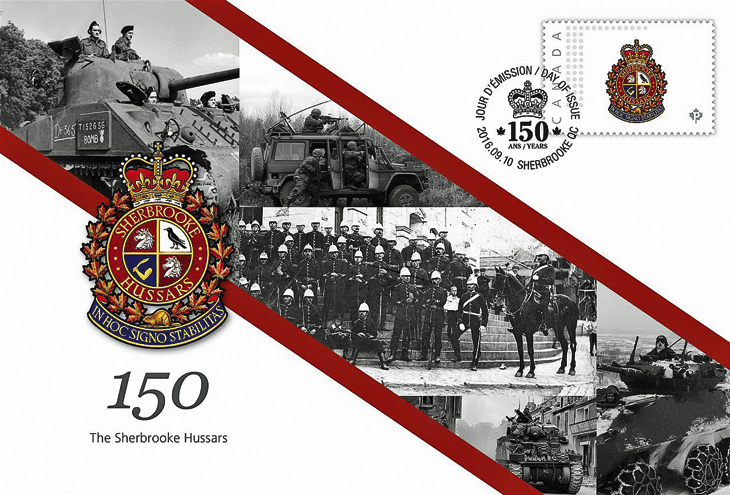 Part of a recent series commemorating important regiments in the Canadian army, this envelope for Quebec’s Sherbrooke Hussars shows modern armored fighting vehicles, a topical interest of the author. The Sherman tank at top left in the photo cachet landed with Canadian troops at Juno Beach on D-Day and fought its way to V-E Day in Germany. 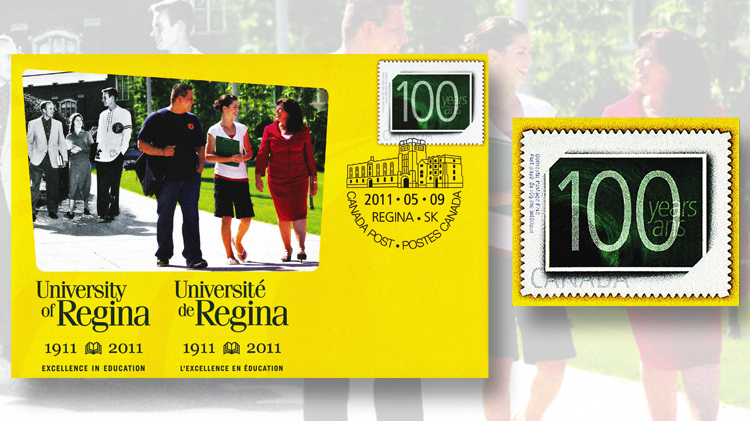 A purpose-designed printed stamp showing “100 Years” on a blackboard appears on this 2011 envelope produced for the centennial of Saskatchewan’s University of Regina. Unlike most Canadian commemorative covers, this was designed to be addressed and mailed. 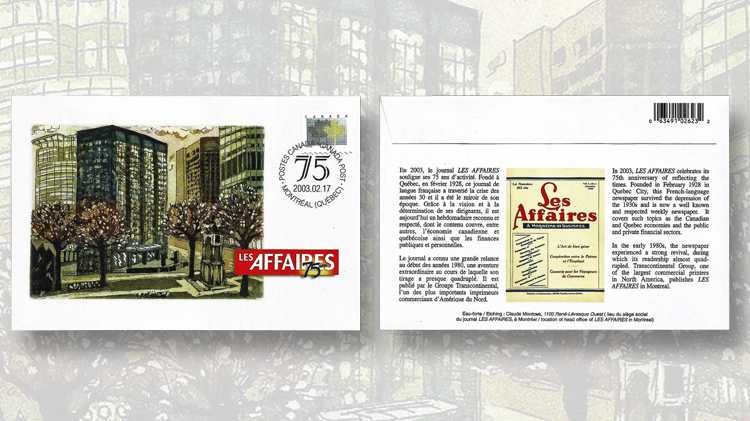 This 2003 envelope commemorated the 75th anniversary of Les Affaires, a weekly newspaper covering Quebec and Canadian business. The full-color cover depicts the company headquarters in Montreal on the front. The reverse gives the company’s history and also shows the first issue the newspaper published in 1928. 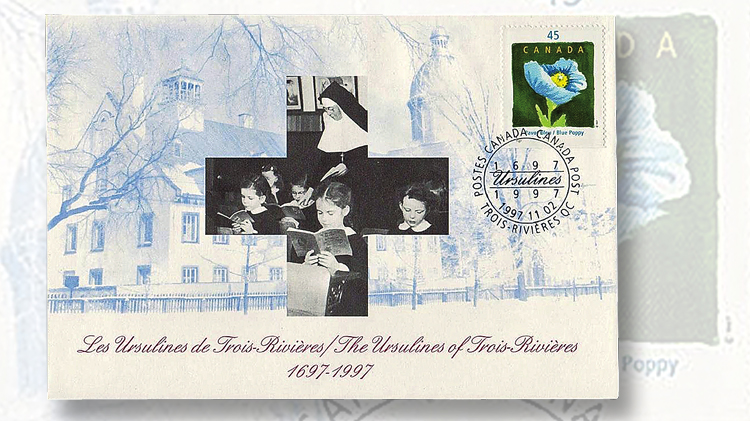 This 1997 commemorative envelope recalled the establishment of an Ursuline convent in Trois-Rivieres in 1697, whose graduates educated and nursed the people of Quebec for the next three centuries. 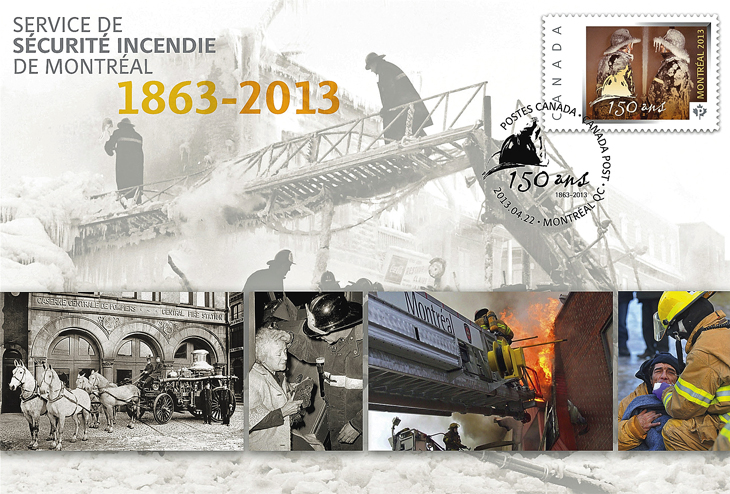 This envelope for the 150th anniversary of the Montreal Fire Department in 2013 depicts images of firefighters in action from the 1860s to the present day.
Previous
Next

Although they’ve been around at least since the 1976 Summer Olympics in Montreal, Canada’s commemorative envelopes have slowly become collector’s items that are worth your attention if you like Canadian stamps and covers.

The earliest of these event covers had little to interest me back in my callow youth. Imagine a first-day cover without a first-day cancel — only a pictorial postmark that was frequently lackluster and indifferently struck — and you’ll pretty much have the idea.

But commemorative covers continued in Canada for a simple reason that the United States Citizens’ Stamp Advisory Committee understands only too well: endless public pressure for postal commemoration.

In the United States, there are literally thousands of requests for new commemorative stamps each year, ranging from deserving subjects of historic appeal and national interest to obscure persons, places and events of purely local notoriety.

The very few that make it onto our postage each year leave lots of disappointed devotees in their wake, but there’s simply no other way to keep a ceiling on the number of new issues released annually, which many U.S. collectors already regard as excessive.

Canada, however, has only about 11 percent of the population the United States has. It also has much less restrictive policies about what can be celebrated by its postal service.

Shown nearby is an example of just the sort of collectible that is possible in a smaller nation with more liberal commemorative policies: a Nov. 2, 1997, cover marking the 300th anniversary of the Ursuline Sisters in Trois-Rivieres, Quebec, where they have been teaching and caring for the community since they founded a convent there in 1697.

There are a number of things to note about the cover. It uses a 1997 45¢ Blue Poppy stamp (Scott 1638) that harmonizes well with the color and themes of the envelope, but is not connected to the commemoration.

More significantly, the stamp received a crisp strike of the special 300th anniversary cancel, but the card itself is strictly a commemorative souvenir. There’s no place for an address, because it never was intended to be mailed.

As time has gone by, these envelopes have become more sophisticated. Shown nearby are the front and back of another such envelope from Quebec marking the 75th anniversary of Les Affaires, a French-language business newspaper.

The front of the four-color-printed envelope shows the firm’s Montreal offices with a special cancel on a 48¢ Maple Leaves coil (Scott 1927), while the back gives a thumbnail review of the publication’s history and pictures its first issue.

These envelopes also have toasted important milestones of Canadian universities and colleges.

As the United States often has issued postal cards for their American counterparts, Canada issued a great number of commemorative envelopes for the same purpose, including the arresting example shown nearby: a yellow envelope for the 100th anniversary of Saskatchewan’s University of Regina.

This differs from the other examples in having a purpose-designed postage stamp picturing a blackboard inscribed “100 Years” and the text “Domestic Postage Paid,” in English and French.

It also has room for an address, enabling it to be sent to alumni, friends, on fundraising efforts, and the like.

The made-to-order stamp is a much bigger deal, in my estimation, because it shows that Canada Post was having imprinted stamps designed, thus taking advantage of the same modern digital tools and processes used to design the envelope.

This meant that stamps of surprising sophistication and creative covers could be produced for a fraction of what it would cost to issue a commemorative stamp.

In fact, Canada had pioneered so-called picture postage stamps beginning with self-adhesive die-cut 43¢ Greetings booklets in 1994 (Scott 1508a), with seven different self-adhesive designs mailers could use to personalize the stamps, or use for designs of their own devising.

Canada Post had hoped that commercial mailers would use the technology to promote their companies and wares, though relatively few took advantage of the opportunity at the time. But times change, and the same basic design technology has been put to brilliant use on these envelopes for a decade or so now.

In 2010, two years before the outpouring of stamps cheering the Canadian Football League centennial (Scott 2558-2576), the Saskatchewan Roughriders marked “100 Years of Pride” with a cover for fans depicting the team’s four logos during the century and 10 of its star players.

Another beauty shown here was issued for the 150th anniversary of the Montreal Fire Department in 2013. Images of the department in action, from an early horse-drawn steam pumper of the 1860s to rescue operations of today, are shown on the front.

A fireman’s helmet appears on the postmark, and is echoed in the printed stamp designed for the anniversary, which shows two firemen, their headgear thickly coated in ice, directing a hose onto a winter fire.

I cannot imagine that anyone with a topical interest in firefighting wouldn’t want this item. However, the stamp is a bit peculiar in that it is printed exclusively in French (which does violate one of Canada Post’s long-established policies).

Also, it uses the maple leaf “P” symbol for permanent domestic-rate stamps, although once again the cover has no place for an address, and all that were sold were already canceled.

The Quebec’s Sherbrooke Hussars envelope shown nearby is part of an ongoing series commemorating the anniversaries of important regiments in the Canadian Army. In World War II, this heavy cavalry formation converted to armored fighting vehicles, an admittedly odd but long-standing topical interest of mine.

The Sherman tank at top left in the diagonal photo montage across the cover is a real find.

Identifiable by its serial number, it is the only Canadian tank to have its own Wikipedia page and even a short documentary on YouTube.

Nicknamed “Bomb” by its crew after the ordnance symbol on their cap badges during WWII, this Sherman tank landed with Canadian troops at Juno Beach on D-Day and fought its way to V-E Day in Germany, firing 6,000 shells and traveling 2,500 miles before the fighting ended.

Today, it is on permanent display at the regiment’s headquarters.

Because this cover was produced by Canada Post, it has as much right to be in my album as the 13¢ and 14¢ Ram Tank stamps that Canada issued during the conflict (Scott 258-259).

From everything I’ve read, Canada Post’s commemorative envelopes sell for $3 apiece plus postage, and are typically produced in quantities of 7,000 to 10,000 each.

Little is known about the aftermarket for them, although they do show up from time to time in various Internet venues and in some dealer’s stocks.

Early ones, however, can be hard to find, and no catalog of which I am aware lists these attractive, well-designed and affordable envelopes.

I’m not aiming to buy them all, but I will enjoy the hunt for the growing number of them that have a well-earned place in my collection.