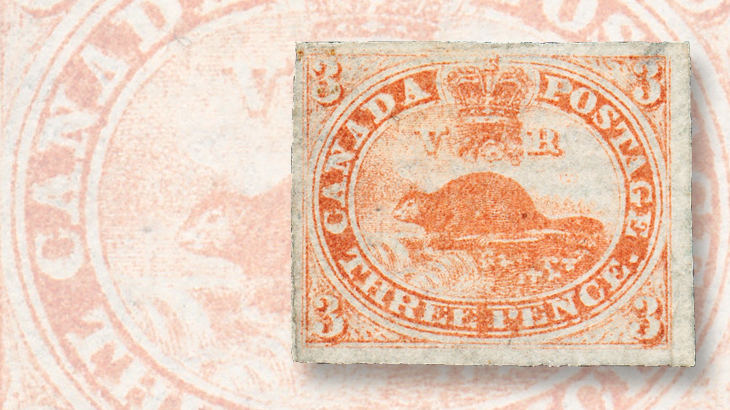 The top item in the sale held by Sparks Auctions in Ottawa in late September was an unused, highly unusual example of Canada’s first issue, with a major design re-entry. It sold for the equivalent of about $18,200.

Sparks Auctions, in Ottawa, held a sale of Canada and worldwide stamps and covers Sept. 29-Oct. 1.

The top item was a beautiful, unused example of Canada’s first stamp, the 3-penny Beaver of 1851 on laid paper (Scott 1), showing a major re-entry in the design.

A re-entry occurred when a stamp design would be transferred to the printing plate by a transfer roller (or stone) that essentially copied the image from the original die. Sometimes, if the technician got the position of the image slightly wrong on the first try, it would be necessary to re-enter it.

In an ideal situation, the misplaced image would be burnished out first, or erased by the re-entering itself. In many cases, however, close examination of a re-entered stamp reveals traces of the original image, which appear as a slight doubling of parts of the design.

In the case of Canada’s 3d Beaver, the re-entry occurred on position 47 of the upper pane in the sheet, and is most strikingly visible as a significant doubling of the lower half of the oval containing the words “Three Pence,” as well as the 3’s in the corners. There are traces of doubling elsewhere on the stamp as well.

Sparks noted in the auction description that only about 20 examples exist of the 3d Beaver in unused condition, making them about four times scarcer than the famous 12d black Queen Victoria (Scott 3) of the same issue. Of these 20 or so Beavers, only two show major re-entries. The Scott Standard Postage Stamp Catalogue values the re-entry in used condition only.