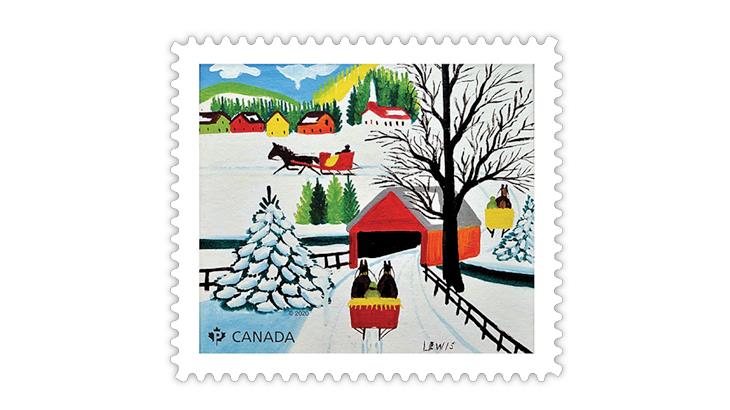 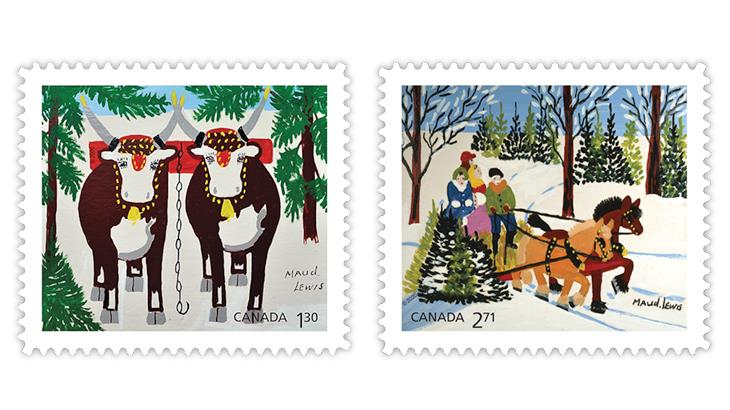 Canada Post also issued Maud Lewis stamps for use on mail to the United States and for other international mail. They picture Team of Oxen in Winter and Family and Sled, respectively. 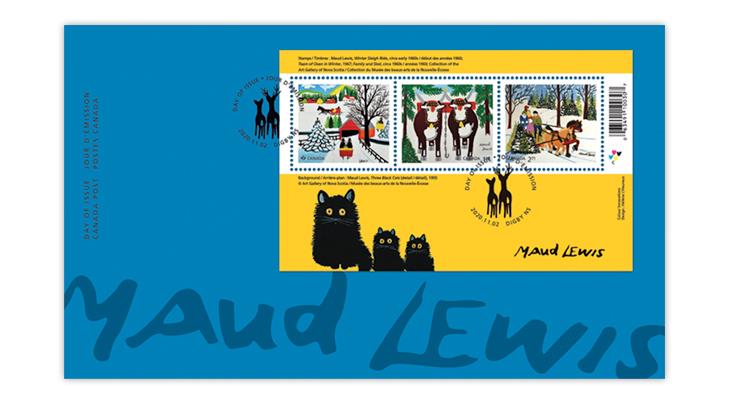 The single religious-themed permanent-rate (currently 92¢) Christmas stamp is inspired by traditional paintings of the Nativity with Mary, Joseph and baby Jesus, adding an ox and a donkey made popular by St. Francis of Assisi. As reported in the Nov. 9 issue of Linn’s, this self-adhesive stamp was issued in booklets of 12.

A sleigh heading through a covered bridge in a snow-covered scene is featured on the permanent-rate stamp. The image is a duplication of Winter Sleigh Ride (circa early 1960s) by Lewis.

A reproduction of Lewis’ Team of Oxen in Winter (1967) is shown on the $1.30 stamp for letters mailed to the United States.

The design of the $2.71 stamp for letters to other international destinations shows a family bundled up on a horse-pulled sled from Lewis’ Family and Sled (circa 1960s).

The Nova Scotia artist has a remarkable story. Lewis spent most of her life in poverty and never traveled more than an hour from her birthplace of South Ohio, Nova Scotia. She suffered from juvenile arthritis and birth defects that left her fingers deformed and her neck and shoulders hunched, but she didn’t allow her ailments to stop her from painting Christmas cards and selling them to neighbors for a few cents each.

According to Canada Post, “As the years past, Maud developed severe rheumatoid arthritis that further gnarled her hands. Still, she spent most of her days at the solitary window of her one-room house, painting pastoral scenes from her childhood memories. Not content to confine her creativity to canvas, it gradually spilled onto her walls, appliances, and other household items, turning the tiny home — which had no central heat, electricity or running water — into her master work.”

She lived in relative obscurity until 1965, when she was featured in a Star Weekly photo essay. Today her art is shown in many galleries and museums, including her house, which is on display at the Nova Scotia Gallery of Art.

Canada Post’s first-day cover for the Maud Lewis stamps is franked with the souvenir sheet and is postmarked in Digby, Nova Scotia, with two deer in the center of the cancel.

Helene L’Heureux designed the Maud Lewis stamps and souvenir sheet. Each stamp measures 32.8 millimeters by 28.8mm, and the souvenir sheet is 112mm by 70mm.