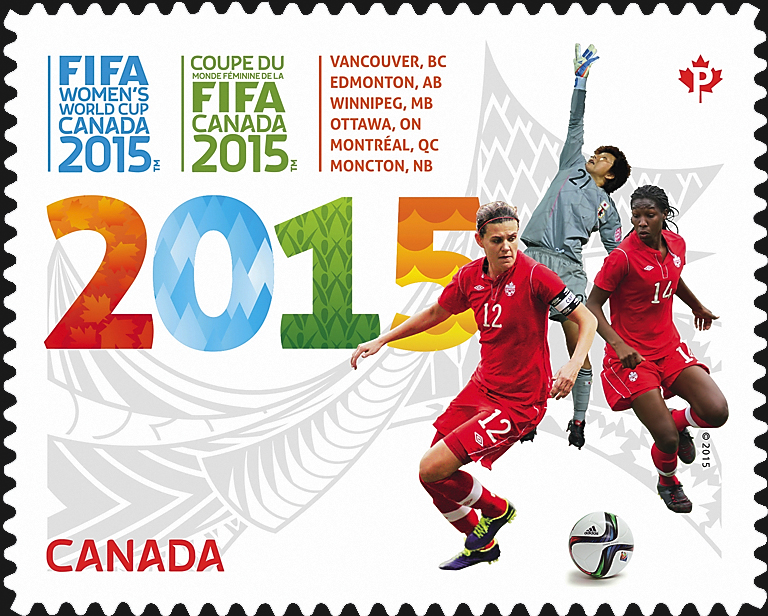 Soccer players Christine Sinclair and Kadeisha Buchanan of Canada and Ayumi Kaihori of Japan will appear on a Canadian stamp to  be issued May 6 to honor Canada's hosting of the FIFA Women's World Cup Canada 2015.

Canada Post will picture Canadian soccer players Christine Sinclair and Kadeisha Buchanan on a stamp to be issued May 6 to commemorate Canada's hosting of the FIFA Women's World Cup Canada 2015. The stamp also shows Ayumi Kaihori of Japan.

Matches in this World Cup will be played June 6 through July 6 in six Canadian cities: Edmonton, Moncton, Montreal, Ottawa, Vancouver and Winnipeg.

In the April 28 press release announcing the stamp, Canada Post says of the three athletes honored on it:

"Sinclair, the all-time leader in international appearances for Canada, has scored more than 150 goals in international play. A two-time Olympian, she led Canada to an Olympic bronze medal in the 2012 London Games. Her performance included three goals in one game against the U.S. team, which went on to win the gold, and she carried Canada’s flag at the closing ceremony. This will be her fourth consecutive FIFA Women’s World Cup competition."

"Buchanan has been called 'the (Christine) Sinclair of defenders' by Canada’s head coach, John Herdman. She was a standout for Canada in the FIFA U-20 Women’s World Cup, which Canada hosted in 2014. She plays with a perennial college soccer powerhouse, the West Virginia University Mountaineers. The authoritative TopDrawerSoccer.com ranks Buchanan No. 6 among collegiate and non-professional women players in the U.S. – and No. 1 in her NCAA division."

"Emblematic of the players coming to Canada from around the world, Ayumi Kaihori of Japan, a goalkeeper who has appeared in 24 international matches, also appears on the stamp."

Deepak Copra, president and CEO of Canada Post, said, "Canada Post is highlighting these athletes and the most prestigious tournament in women’s soccer. At the same time, we are celebrating the incredible advancements that the women’s game has made in Canada, on the field and in fan interest."