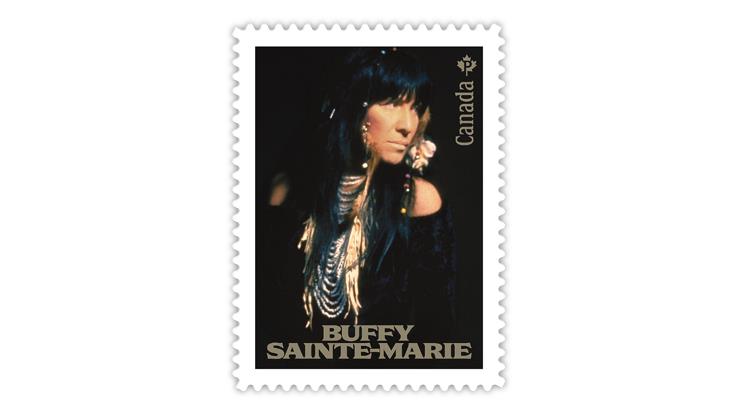 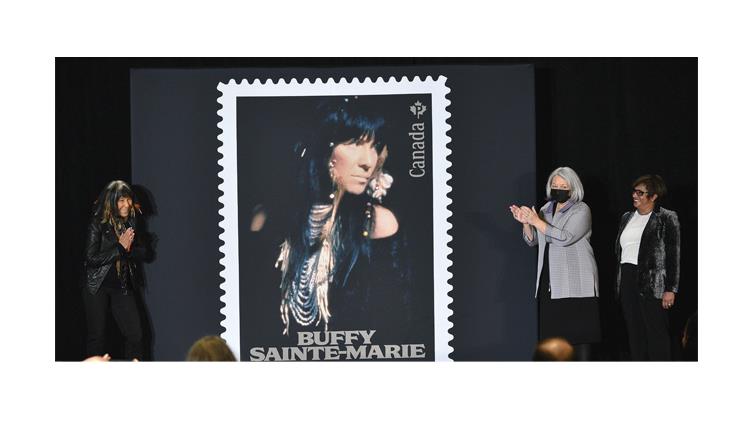 Buffy Sainte-Marie participated in the unveiling of the stamp honoring her Nov. 18 at the National Arts Centre in Ottawa, Ontario. Shown from left are Sainte-Marie; Mary May Simon, governor general of Canada; and Suromitra Sanatani, chair of the board of
Previous
Next

Singer-songwriter, activist, artist and educator Buffy Sainte-Marie unveiled Canada Post’s stamp honoring her on Nov. 18. The nondenominated, permanent-rate (currently 92¢) stamp was issued the next day, Nov. 19, in a booklet of 10.

The unveiling ceremony took place at the National Arts Centre in Ottawa, Ontario.

Canada Post called Sainte-Marie one of the “music industry’s most distinctive and recognizable voices,” adding that “for nearly 60 years, the internationally renowned singer-songwriter has used it as a powerful way to speak out against injustice and help foster change.”

At age 80, she is still performing.

Sainte-Marie was born to Cree parents in 1941 in Saskatchewan and raised by adoptive parents in Massachusetts and Maine. She taught herself to play piano at a young age and guitar when she was a teenager.

In the early 1960s, she began performing at coffee houses and folk festivals in New York City and Toronto, Ontario. By age 24, she had also toured in Europe, Australia and Asia, according to the Indigenous Saskatchewan Encyclopedia on the website of the University of Saskatchewan.

Saint-Marie’s first album, It’s My Way released in 1964, included what would become one of her most famous songs, Universal Soldier. On her website, Sainte-Marie said: “I wrote Universal Soldier in the basement of The Purple Onion coffee house in Toronto in the early sixties. It’s about individual responsibility for war and how the old feudal thinking kills us all. Donovan had a hit with it in 1965.”

Sainte-Marie has received many awards and honors during her long career, including being named best new artist in 1964 by Billboard Magazine, several Juno awards, and an Oscar and Golden Globe for co-writing Up Where We Belong for the 1982 film An Officer and a Gentleman. She was invested as a companion of the Order of Canada in 2019.

However, she is known for more than her music.

Canada Post said: “For a number of seasons, she shared her warmth and wisdom with millions of children as a regular on Sesame Street. She is also a talented multi-media artist whose deeply meaningful and visually arresting works hang in galleries across Canada and the United States.”

The stamp shows a photo of Sainte-Marie by Simon Fowler. Canada Post said that this photograph appeared on the cover of her single The Big Ones Get Away from her 1992 album Coincidence and Likely Stories.

The photo on the booklet cover showing Sainte-Marie playing an Ovation guitar is courtesy of Ovation Guitars/GEWA Music, according to Canada Post.

Lowe-Martin printed the stamp by multicolor lithography. A total of 180,000 booklets were printed.

Two more photos are reproduced on Canada Post’s first-day cover. The photo on the front was taken by Barry Roden, and the one on the back was taken by Christie Goodwin at a 2011 performance in London.

Canada Post describes the gold Regina, Saskatchewan, first-day cancel as “a line drawing of the Dobro acoustic guitar used in a May 1969 Vogue photoshoot of Sainte-Marie.”