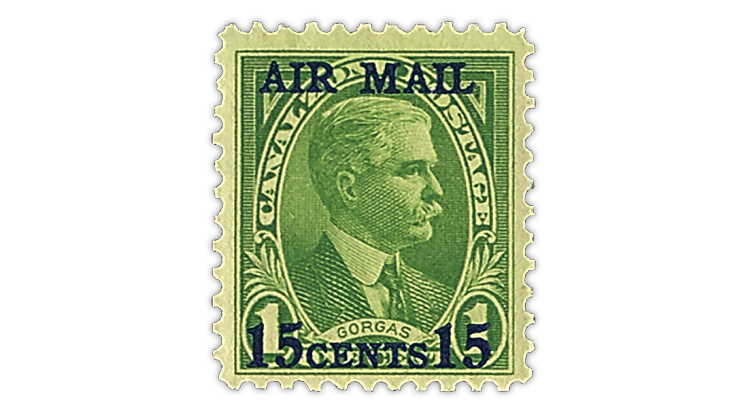 The Canal Zone, a strip of territory across the Isthmus of Panama on either side of the Panama Canal, was under the administration of the United States from 1904 to 1979. And from 1979 to 1999, it was jointly administered by the United States and Panama. At the end of 1999, it reverted to Panama.

The Canal Zone issued postage stamps and operated a postal service under the administration of the United States from 1904 to 1979. These Canal Zone stamps are popular with many U.S. collectors.

Demand is strong for the 1931 yellow green 15¢-on-1¢ Maj. Gen. William Crawford Gorgas airmail stamp with the type II overprint (Scott C2). As illustrated in the Scott Specialized Catalogue of United States Stamps and Covers, the flag of the “5” in the overprint is curved upward.

The stamp in very fine grade is selling for about 90 percent of catalog value in unused, hinged condition.

It is a good buy in mint, never-hinged condition at 75 percent or perhaps a bit more of catalog value.