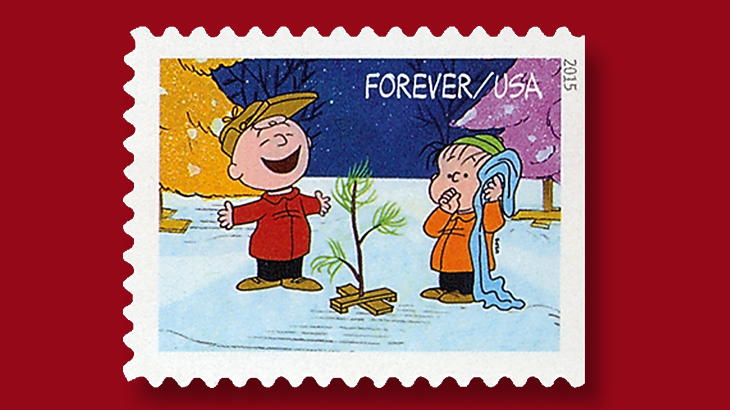 The cartoon caption contest stamp for December is this forever stamp showing Charlie Brown’s Christmas tree from the 2015 booklet of 10 marking the 50th anniversary of the 1965 TV special A Charlie Brown Christmas. You can enter the contest by telling us

There is little that is more universally symbolic of Christmas than the Christmas tree. Choosing just the right specimen for the annual celebration is often laden with tradition.

As with other things surrounding the Christmas season, the imperative to have the biggest and best can obscure the essential meaning of “peace on Earth, goodwill to man.”

Charles Schulz took on this theme with his 1965 animated TV special A Charlie Brown Christmas. It was hugely popular when first aired and has lost nothing in its appeal ever since.

The U.S. Postal Service recognized this fact when it issued a set of 10 forever stamps in booklet form before Christmas 2015.

The stamp picturing Linus, Charlie Brown and his rather threadbare Christmas tree (Scott 5028) will be the cartoon caption contest stamp for December.

Various interpretations have been given to the meaning of the tree and the TV special; the most prevalent is that it is a protest against commercialism. The tree may be unattractive by normal standards, but we can look beyond its faults to what it represents.

In coming up with an entry for the cartoon contest, you can use the Christmas theme, or another approach, such as stamp collecting, current events, the Peanuts cartoon legacy, or whatever else occurs to you.

To be considered for the prizes, entries must reach me no later than Dec. 28.