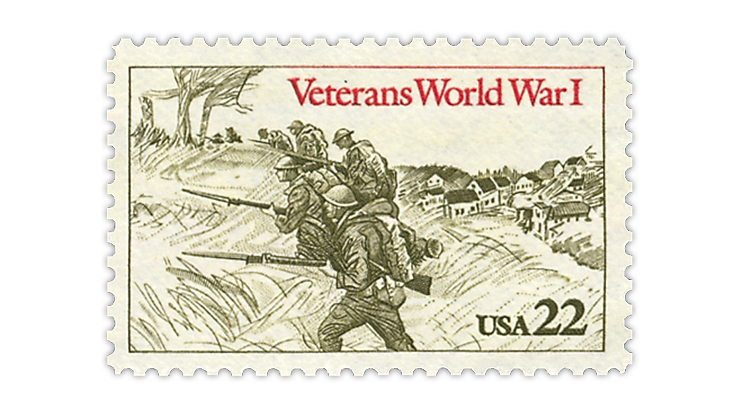 Our cartoon caption contest stamp for February is the 1985 22¢ stamp honoring World War I veterans. Entries must be received by Feb. 22 for a chance to win a prize. The rules are in the accompanying article.

We’ve recently marked the 100th anniversary of the end of World War I, also known as the war to end all wars. Unfortunately, history didn’t turn out that way.

In 1985, the United States issued a 22¢ stamp that didn’t commemorate any specific event, but instead honored the 4.75 million U.S. men and women who served in uniform during WWI (Scott 2154). About half actually served in combat. Of these, there were 53,402 combat deaths and 204,002 wounded.

The United States did not enter the war until 1917, so if the stamp was intended to mark an event, it would be the one that arguably lit a fire under President Woodrow Wilson and led to a U.S. declaration of war.

Richard Sheaff designed the stamp, and it was engraved by master engraver Czeslaw Slania.

It shows bayonet-wielding American troops advancing up a hill at the Second Battle of the Marne (July 15-Aug. 6, 1918). The Allied victory in this battle is considered to be a turning point in the war.

While the subject is more serious than most cartoon caption contests, the action shown and the irony of hoping that this war would end war makes it an attractive stamp for this purpose.

You are invited to put yourself in uniform and consider what you might be thinking or saying as you advance up the hill. You can address the war itself, the travails of the soldiers, the politics of the era, how the war relates to stamp collecting, or anything else you think is appropriate.

For each winner, the prize will be a 13-week subscription to Linn’s (a new subscription or an extension). Entries must reach me no later than Feb. 28.