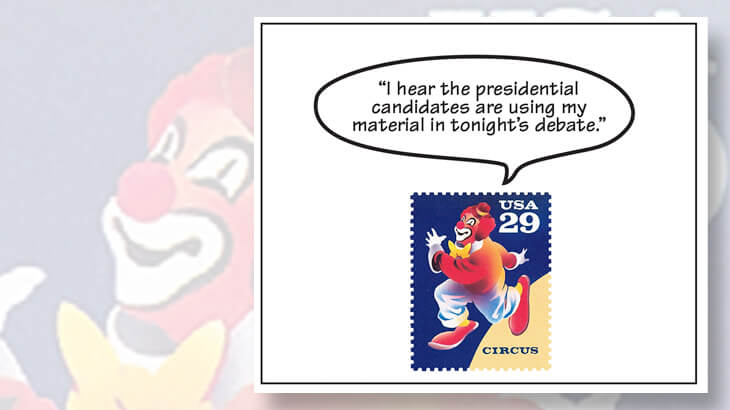 It was entirely predictable that the 2016 presidential election would be the backdrop for many of the entries in the cartoon caption contest for June using the Clown stamp (Scott 2750) from the 1993 Circus block of four.

More than 80 percent of the entries used that theme.

Half of them were so partisan — and negative — that they would be inappropriate for Linn’s Stamp News.

Threading the needle as to what it appropriate still leaves a good many excellent entries that capture the mood without picking on just one of the candidates. Here are several of them.

From Ken Goetz of Cairo, N.Y., “Do I still have time to enter the presidential primaries?”

“I hope the next president doesn’t embarrass us clowns!” by Steve Zarko of Lewisburg, W.Va.

“At the inauguration, I want to hear Send in the Clowns instead of Hail to the Chief,” by Allan Lee of Cartersville, Ga.

“Pick your favorite clown this year, and be sure to VOTE!” from Edward Callas of Scio, Ore.

“We have Clarabell and Bozo running for president. I think I’ll throw my hat in the ring and make it three clowns,” by David Vikan of Dickinson, N.D.

The nonphilatelic line winner comes from this group. It is by Greg Gentile, whose clown could be referring to any of the numerous aspirants who participated in the early debates.

The second most popular theme for this contest used the clown’s oversized shoes as a prop.

Mildred Barylski of Warrenton, Va., has the clown saying, “I could do a better ‘soft shoe’  if I had less shoe!”

A different approach was taken by Charles Chiaramonte of Valley Stream, N.Y., with “If they want me to run for the circus track team, then they gotta get me outta these clodhoppers!”

On the philatelic side of the contest, Ron Breznay of Hanover Township, Pa., won with, “Run! The elephants are stamp-eding!”

“I just had a paint fight with another clown, and they made a LOVE stamp out of it!” by Dave Schwartz of Commack, N.Y.

“We’ll see if there’s a sucker born every minute, by the sales of my sheetlet with die-cut perforations sold only in the 2014 yearbook!” from Steve Kotler of San Francisco, Calif.

“I’m so happy I don’t have to watch where I step now that the elephants are gone!” by Wayne DeWald of Arlington, Texas.

The next cartoon caption contest will be announced in the Aug. 8 Linn’s.