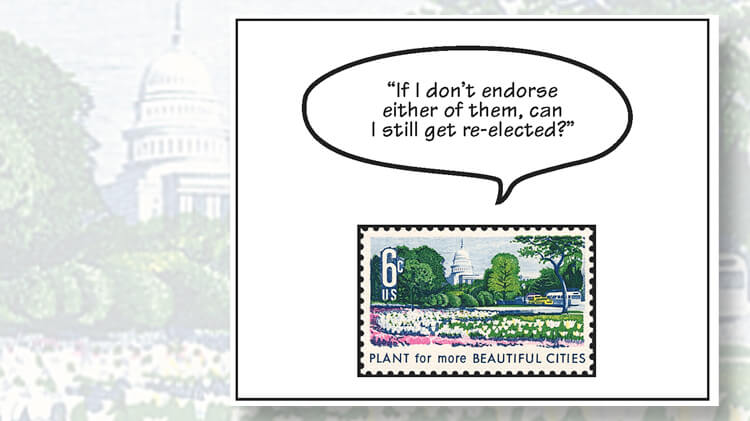 The winning line in the nonphilatelic part of the cartoon caption contest for September using a 1969 6¢ Beautification of America stamp inscribed “Plant for more beautiful cities” poses a conundrum that many on Capitol Hill might be thinking. It is the work of Merle Farrington of Medway, Mass. The next cartoon caption contest will be announced in Linn’s Nov. 14 issue.

The difference between flowers and politics — be it the odor, the view or the level of enjoyment — dominated the entries in the September cartoon caption contest featuring the 1969 6¢ Beautification of America stamp showing the Capitol with azaleas and tulips (Scott 1365).

The stamp bears the message “Plant for more Beautiful Cities.”

These entries can be summed up by this suggestion from Lawrence Segel of White Plains, N.Y., “Flowers and trees make the Capitol building look beautiful; what goes on inside is something else!”

Elgin Sink of New Cumberland, Pa., prefers action to diagnosis with “Great job on the outside; now how about the inside?!”

C.A Stillions of Washington, D.C., has an unusual entry, a wonderful line he overheard some years ago from a staffer with the Office of the Architect of the Capitol. It proves that everything depends upon one’s perspective: “The Capitol — that’s that pile of bricks and stones in the middle of my park!”

The philatelic line winner comes from Donna Smith of Wilmington, Del., who puts her line in the context of the congressional franking privilege. She has a U.S. representative (who hasn’t bought a stamp since he was elected) saying, “With my mailing privileges I can’t use this pretty postage stamp!”

Another pearl from the lips of an anonymous representative is suggested by Merle Farrington of Medway, Mass. He wins the nonphilatelic part of the contest.

“What do we have to do to get candidates that are more politically beautiful?” by John Hostetter of Lancaster, Pa.

“To hear the candidates speak, you would think they were more interested in beatification than beautification!” from Steve Kotler of San Francisco, Calif.

“Okay, who planted the marijuana?” by Nina Jackson of Culver City, Calif.

“What a capital idea to plant for more beautiful cities!” sent in by George Schaetzle of Sheboygan, Wis.

The next cartoon caption contest will be announced in the Nov. 14 Linn’s.