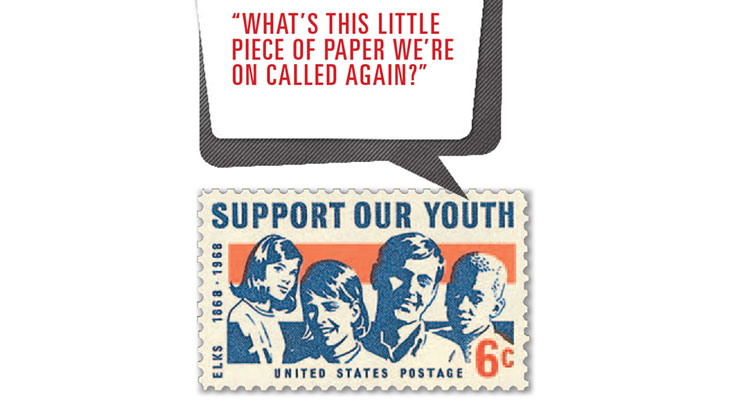 The November cartoon caption contest featured the 1968 6¢ Support Our Youth commemorative. The winner of the philatelic part of the contest is Ron Breznay of Hanover Township, Pa., who injects a dose of reality into the discussion with this real question

A major theme for the November cartoon caption contest featuring the 1968 6¢ Support Our Youth commemorative (Scott 1342) was the ways in which support might be given.

Mike Dornbrock of Cedar Falls, Iowa, views support in financial terms with, “You can do that by raising our allowance; 6¢ isn’t enough!”

Donna Smith of Wilmington, Del., took a different approach with, “Can you guess which one of us is spending our allowance money on our stamp collection rather than Beach Boys and Jefferson Airplane LPs?”

Another much-used theme was the pervasiveness today of social media, which would have been a mystery to the teens of 1968.

The winner in the nonphilatelic part of the contest comes from Dave Schwartz of Commack, N.Y., whose proposed line may match reality for some: “See Dad, it says ‘Support our Youth.’ How about I live in your basement ‘til I’m 30?”

The philatelic side of the contest was won by Ron Breznay of Hanover Township, Pa., with the line shown in the illustration. Here again, reality intrudes. How many times have I explained to young kids what stamps are and what they are used for?

“We have a sixth cents,” by Dale Stout of Colorado Springs, Colo.

“Stop laughing! So I licked a self-stick stamp. We never had those when I was young,” from Stuart Lyons of Woodmere, N.Y.

“My grandma says it’s better to binge with hinges than to be a twit tweeting and texting!” from Rosemary Harnly of Red Wing, Minn.

“Hey, hurry up and take our picture so we can get back to looking down at our cell phones!” from an unnamed reader in St. Paul, Minn.

The next cartoon caption contest will be announced in the Jan. 14 Linn’s.