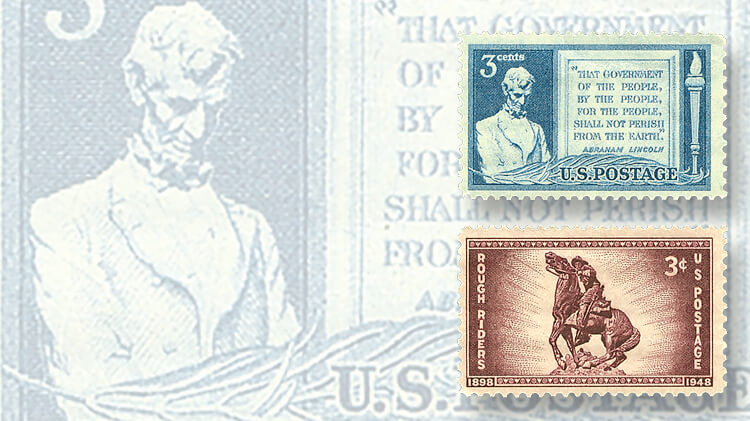 The 1948 3¢ Lincoln’s Gettysburg Address and 3¢ Rough Riders stamps were selected as the best stamp in the first Linn’s U.S. stamp popularity poll.

We are pleased to announce Linn’s 2016 U.S. stamp popularity poll is open for voting.

Linn's first U.S. stamp popularity poll took place 68 years ago, in 1948. Linn’s readers were asked to complete a simple task: select the best stamp and worst stamp. The winners of the best-stamp category that year were the 1948 3¢ Lincoln’s Gettysburg Address stamp (Scott 978) and the 3¢ Rough Riders commemorative (973). The 3¢ American Turners Society Centennial stamp (979) and the 3¢ Fort Kearney commemorative (970) were voted to be the worst stamp.

In 1950, Linn’s added a least-necessary category. The first-time winners in that category were the 3¢ American Bankers Association stamp (987) and the 3¢ Samuel Gompers stamp (988) in the Famous American series.

A fourth category was added in 1951, when the the 3¢ American Chemical Society commemorative stamp (1002) was selected as the winner of the newly established appropriate-design category.

A most-important category was added in 1979, and the first winners in that category were the multicolor 15¢ Vietnam Veterans stamp (1802), the orange-red 15¢ International Year of the Child commemorative (1772), and the set of five stamps honoring the 22nd Summer Olympics (1790-1794).

In 1983, Linn's expanded the poll to include separate categories for definitives and postal stationery, in addition to commemoratives. Special stamps were added to the commemoratives category in 1984. Also, in 1984 a category was added for favorite stamp. Readers chose the four-stamp 20¢ Dogs set (2098-2101) as the favorite stamps for 1984.

In recent years, Linn’s has expanded the stamp poll to allow online voting in addition to print ballots. Votes can be cast for the best design, most important, worst design, and least necessary in three categories: commemorative stamps, definitives and special stamps, and postal stationery. Don’t forget to write in your personal favorite stamp in the space for “My Favorite 2016 Stamp.”

We encourage you to vote in the poll, whether by mail or online. We welcome votes from stamp clubs, who are encouraged to print multiple copies of the ballot for their members.

Keep in mind, this is not a scientific poll. The poll is intended as a fun way for readers to share their opinions of the stamps and postal stationery items issued by the U.S. Postal Service.

All mail-in ballots must be postmarked no later than March 1, 2017, to be counted. The results will be announced in an issue of Linn’s in late spring.