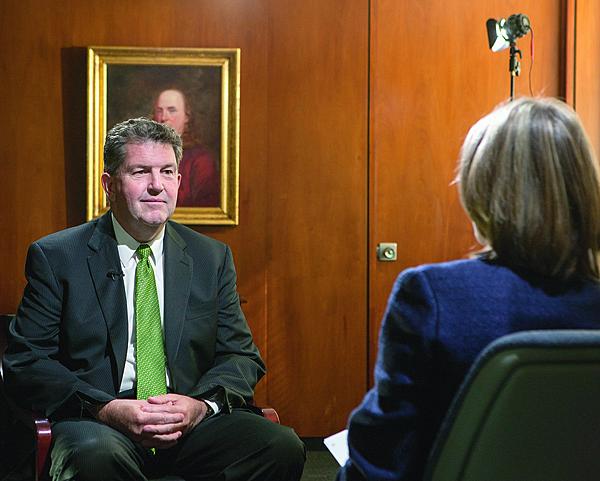 CBS Sunday Morning senior correspondent Rita Braver just got the lowdown on stamp collecting, and she is sharing that story on the popular news and entertainment program.

Braver’s report on the stamp hobby is scheduled for the Jan. 18 CBS Sunday Morning episode, although she noted that breaking news can cause rescheduling, even close to air time.

Braver spoke with Linn’s Stamp News about her experience of getting familiar with the hobby and those who love it.

She also hinted that her report might reveal some breaking stamp news, but she wouldn’t give away her scoop.

“The story began when our executive producer, Rand Morrison, threw out the idea of doing a story on stamp collecting,” Braver said. Producer Dustin Stephens liked the suggestion, and Braver drew the story assignment.

“As the daughter of a stamp collector, I thought it was a good idea,” she said.

Among the people she interviewed for the segment were investment strategist William H. Gross, a stamp collector whose $8 million donation to the Smithsonian National Postal Museum made possible the construction of the new stamp gallery that bears his name.

During a visit to California, she got an opportunity to learn about Gross’ interest in the hobby, and to see his prize stamp, the United States 1868 1¢ blue Z grill (Scott 85A), which has a Scott catalog value of $3 million.

She also traveled to the stamp gallery in Washington, D.C., where she interviewed Postmaster General Patrick Donahoe in the National Postal Museum, and in his office at the Postal Service headquarters at L’Enfant Plaza.

And she went to Virginia and met with collector and CPA David B. Robinson who, with his wife Gail, found one of the 100 upright $2 Jenny Invert panes created by the United States Postal Service in 2013.

“He took us into stamp collecting,” she said, “why it’s exciting, and how you don’t need a lot of money to enjoy it.”

Plans call for the program to include vintage background footage, including clips from the 1963 film Charade, starring Cary Grant and Audrey Hepburn, in which stamps and stamp collecting play a significant role.

Braver told Linn’s her father was a stamp collector, but that when she was growing up, stamp collecting was considered a boy’s hobby.

Though she and her sisters found stamps interesting, their father’s collection wound up going to his oldest nephew.
Braver said the CBS feature is intended to remind people that stamp collecting is fun and interesting, and that there is always a story behind the stamps.

CBS Sunday Morning is broadcast at 9 a.m. on most of the East Coast, but it’s best to check local program listings for the broadcast time.

The segment should be available some time after broadcast on the CBS Sunday Morning website. Visit www.cbsnews.com/
sunday-morning for more information.

The show is also broadcast later on the Smithsonian Channel.