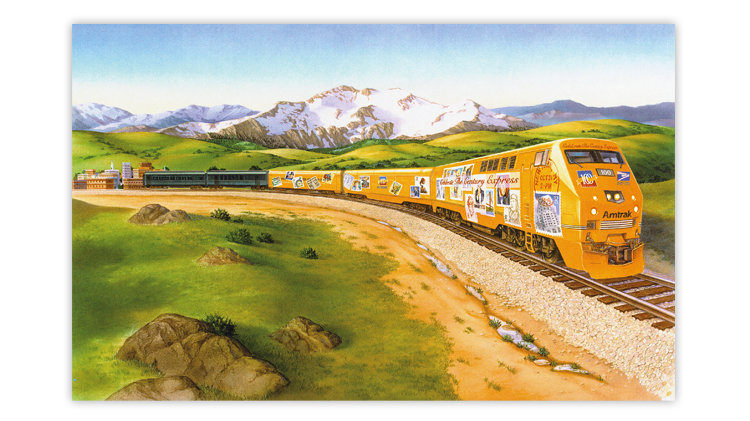 The United States Postal Service used this artwork of the Celebrate the Century Express train on media kits, cacheted covers and more.

The two train articles in the Jan. 17, 2022, issue of Linn’s (Great Britain Philately, page 12, and Swiss Stamp Scene, page 56) sent me on a reminiscing trip back to June 11, 1999. I was 17 at the time, and I had volunteered at the Oshkosh, Wis., stop of the United States Postal Service’s Celebrate the Century Express train. It was one of the first times I helped to postmark stamps at an event for the Postal Service.

As seasoned cover collectors know, collectors can postmark items as long as a postal employee supervises.

The Postal Service needed a hand at many events across the country as it rolled out the Celebrate the Century Express train in partnership with Amtrak. The 18-month tour spanned 1999 and 2000.

Paul Schroeder, a member of the Oshkosh Stamp Club, wrote about the event in the September 1999 issue of Across the Fence Post, published by the Wisconsin Federation of Stamp Clubs.

“For train buffs and postal history fans, the train was a perfect event,” Schroeder wrote. “They enjoyed the modern Amtrak P42 Genesis series diesel locomotive, the historic observation passenger car, the Southern Railroad No. 36 railway post office car, and the special postmark offered in each city.”

I fondly remember canceling covers with Schroeder and others from the Oshkosh Stamp Club.

Two postmarks were offered. One pictured the train and the Celebrate the Century logo. The other was a steel Railway Post Office cancel designed to resemble an RPO cancel from an earlier time.

What was also memorable about the stop was talking with former RPO clerks and hearing about their work in catching the mail on the fly.

“There was a special glow on the faces of these retired employees, having been called back as the experts in their craft no longer needed today,” Schroeder wrote.

The wooden train whistle I purchased at the event sits proudly at my study at home, and I still have the staff T-shirt that I wore.

And for collectors that might have missed the train when it was around, souvenirs are available in the secondary market. You just have to search and continue to look for them.

In the Sept. 20, 2021, issue of Linn’s we announced the upcoming publication Most Influential Philatelists and Their Epic Stamp Stories. This 2022 edition will recognize a number of individuals who have had an impact on the hobby in the past couple of decades.

It was originally scheduled to be a separate magazine shipping with the Jan. 17 edition, but because of paper supply issues, the publication will be released along with the March 21 issue.