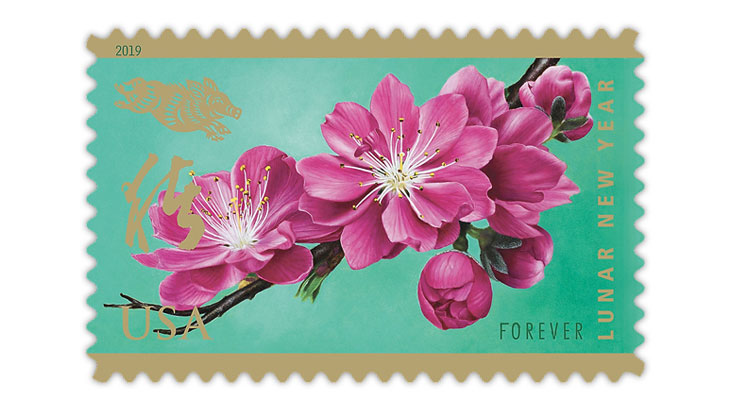 The final issue in the 12-stamp Celebrating Lunar New Year series from the United States Postal Service marks the Year of the Boar. The central illustration by artist Kam Mak depicts peach blossoms.

A new United States stamp will be issued Jan. 17 to celebrate the coming lunar new year, and the U.S. Postal Service is describing it as the 12th and final stamp in its Celebrating Lunar New Year series.

The nondenominated (50¢) Year of the Boar forever stamp will be issued with a Thursday morning first-day ceremony in Houston, Texas, at the Chinese Community Center, 9800 Town Park Drive.

Luke Grossmann, USPS vice president for finance and planning, will lead the event, which begins at 11 a.m. Central Time. The ceremony is open to the public, but those planning to attend are encouraged to register in advance online.

As with the previous 11 stamps in the Celebrating Lunar New Year series, the central artwork features a painting by New York-based artist Kam Mak. The illustration this year shows purple peach blossoms on a branch against a pale green background.

The Postal Service reports that peach trees in China typically bloom in February, “just in time for the new year.” The upcoming year of the boar will begin Feb. 5 and end Jan. 24, 2020.

The phrase “Lunar New Year” is lettered reading up along the right edge of the stamp design, and “Forever” is inscribed near the lower right corner. A small version of Clarence Lee’s intricate cut-paper design of a boar appears at upper left, and the Chinese character for “boar” drawn in grass-style calligraphy by Lau Bun is centered near the left edge. “USA” is printed at lower left.

The design is by USPS art director Ethel Kessler.

“Around the world, millions of people welcome a new year with gifts, music and celebration,” according to the Postal Service. “The Lunar New Year, also known as the Spring Festival in China and Tet in Vietnam, is the most important holiday of the year for many Asian communities.”

The USPS said that its Celebrating Lunar New Year stamp series features illustrations that focus on common ways the Lunar New Year holiday is celebrated. The first stamp in the series, from 2008, celebrated the Year of the Rat and shows red paper lanterns. Later stamps depicted subjects such as firecrackers, drums and lucky bamboo plants.

Each stamp combines an original painting by Mak with the cut-paper and calligraphic elements.

Certain traits have been attributed to people depending upon the year in which they are born. Those born in the year of the boar, for example, show characteristics that include sincerity, tolerance and intellect, and they make good companions, according to various sources.

The 50¢ postage value and retail cost of the Year of the Boar forever stamp will increase to 55¢ on Jan. 27, 10 days after the stamp is issued.

The domestic-letter rate hike is one of many scheduled adjustments being made that day to various U.S. postage rates.

It is expected that the USPS will offer two uncacheted first-day covers with postmarks that pay tribute to the artists whose illustrations have appeared on the stamps in this series.

The black cancel pictured here shows Lau Bun’s calligraphy, while the pictorial color postmark includes a rendition of Lee’s cut-paper boar illustration and a peach blossom sprig similar to those rendered by Kam Mak for the new forever stamp.

A die-cut press sheet of the Year of the Boar stamp will likely be offered by USPS Stamp Fulfillment Services, but the Postal Service has not yet announced the additional collector products it will issue with the new stamp.