Celebrating the 250th anniversary of the historic Stamp Act of 1765 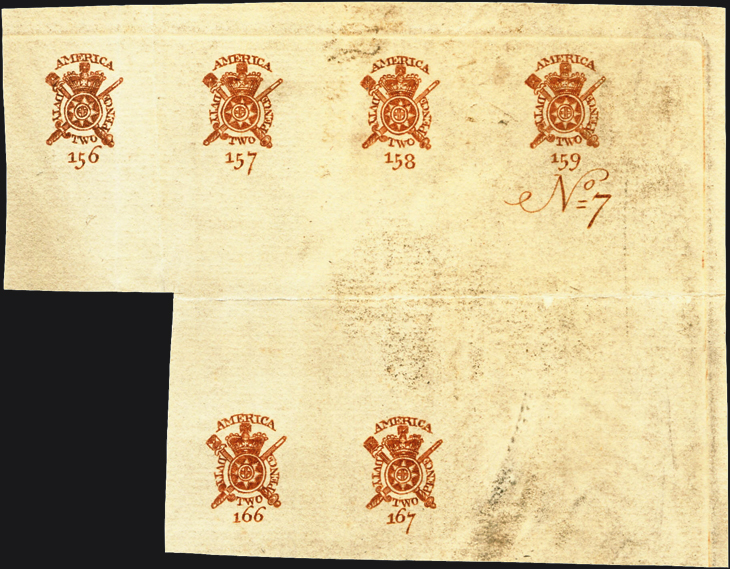 An irregular plate-number block of six of the engraved 2-penny almanac stamp (Scott RM15), prepared to pay the tax imposed by the Stamp Act of 1765. 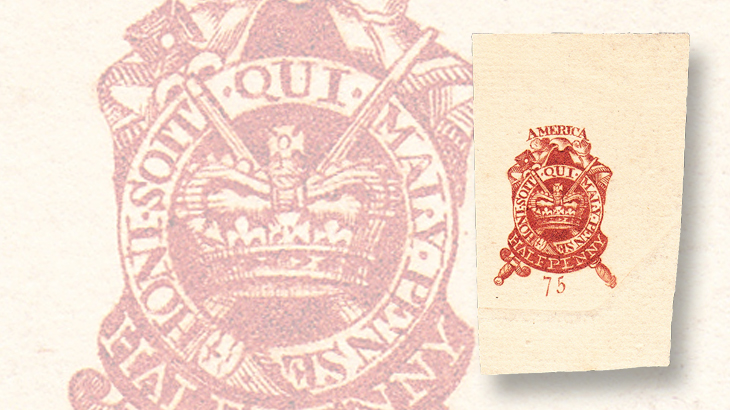 A ½d newspaper stamp (Scott RM18). Four foreign newspapers used the stamp paper, but all surviving examples are institutionally held. Benjamin Franklin suspended publication of The Pennsylvania Gazette rather than pay the tax. 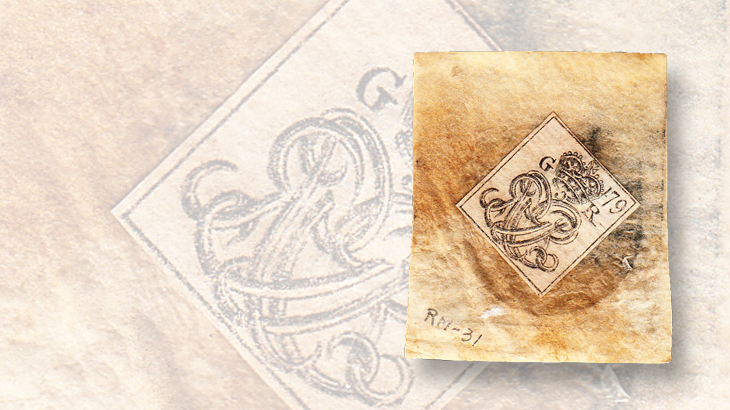 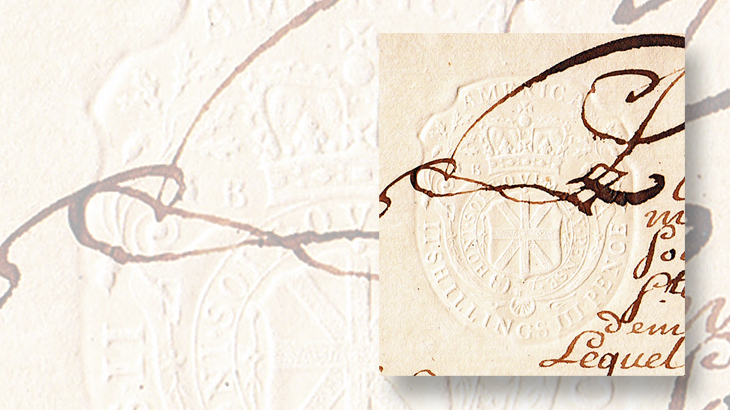 This 2-shilling, 3-penny document stamp (Scott RM30) is affixed to a declaration, written in French, that was used in Quebec City. 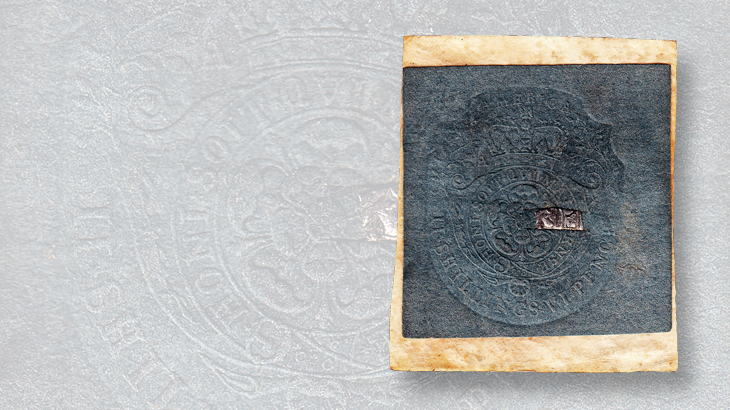 This document stamp is impressed on blue paper and stapled to a piece of vellum (sheep skin).
Previous
Next

The act imposed taxes on various legal documents, newspapers, almanacs, and playing cards, with evidence of payment to be indicated by a revenue stamp.

Following resistance by the Founding Fathers, the act was repealed effective March 18, 1766.

Although the Stamp Act is frequently taught in history classes, most stamp collectors have never seen one of the stamps inscribed “America” that were issued to demonstrate payment of the tax.

These fascinating, intricate stamps are listed in the Embossed Revenue Stamped Paper section of the Scott Specialized Catalogue of United States Stamps and Covers. Scott numbers for these stamps are prefixed RM.

The colonies of Massachusetts and New York issued their own embossed revenue stamped paper in 1755 and 1757, respectively.

Given the existing use of embossed revenue stamps, Parliament thought it reasonable to impose taxes on the Americas — including Canada and British Caribbean countries — to pay for the British troops protecting the colonies following the French and Indian War.

However, the colonists viewed the act as “taxation without representation” and a violation of their rights as Englishmen.

There were protests in a number of cities, eventually leading to the Stamp Act Congress, which represented the first organized opposition to British rule, and was a direct predecessor to the First Continental Congress.

Because of American opposition to the tax, only one document survives from what is now the United States, a document from Florida, with most surviving documents used in Canada.

Illustrated nearby is an irregular plate-number block of six of the engraved 2-penny almanac stamp.

The almanac stamps were prepared in 2d, 4d and 8d denominations (Scott RM15-17), but only proof impressions are known to have survived.

Also pictured is an example of the ½d newspaper stamp. Four foreign newspapers used the stamp paper, but all surviving examples are institutionally held. Benjamin Franklin suspended publication of The Pennsylvania Gazette rather than pay the tax.

The newspaper stamps were issued in ½d, 1d and 2d denominations (Scott RM18-RM20). Proof impressions are available, and there are a few unused stamps that are probably printer’s waste.

Shown next is an example of the 2-shilling, 3-penny document stamp, photographically cropped from the full document — a declaration, written in French, used in Quebec City. Roughly 55 full documents survive, plus another 50 or more cut squares.

The stamps were authorized in denominations from 3d to £10 (Scott RM24-RM41), although not all denominations exist, and denominations larger than 10sh were probably never issued. The most common America stamps are unused cut-square remainders of the 2sh6d stamp (RM31a).

An example of the stamp impressed on blue paper and then stapled to a piece of vellum (sheep skin) is illustrated here.

Because vellum is too thick to take an impression of the embossed stamp, the stamp was impressed on paper glued and stapled to the vellum.

On the back of the vellum (shown), there is a paper “cypher” bearing the seal of King George III. These cyphers cover the back of the staple to prevent reuse of the stamp. As the cyphers are roughly the size of the Penny Black, many believe they were the inspiration for the first postage stamp.

The 1sh and 2sh6d stamps comprise more than half of the surviving documents. The remaining documents are quite rare and are in a small number of collections.

When these documents appear at auction, there is normally spirited bidding.

The 2sh6d cut squares are more plentiful, and more affordable, with a Scott U.S. Specialized catalog value of $450. Examples have sold on eBay in the past.