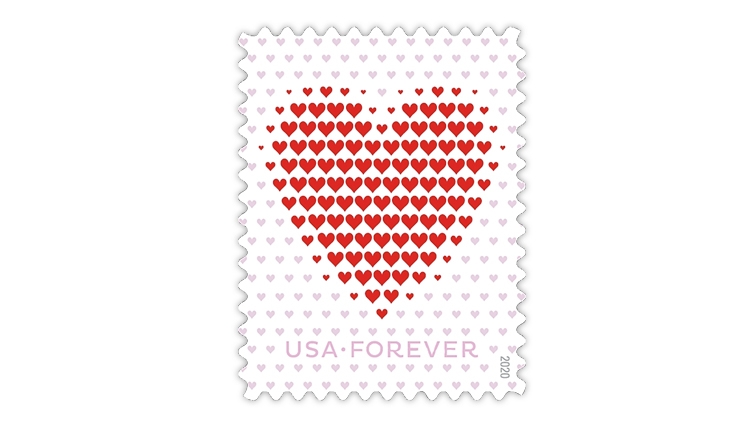 The next stamp in the United States Love series is named Made of Hearts. It will be issued Jan. 23 with a first-day ceremony at St. Jude Children’s Research Hospital in Memphis, Tenn. 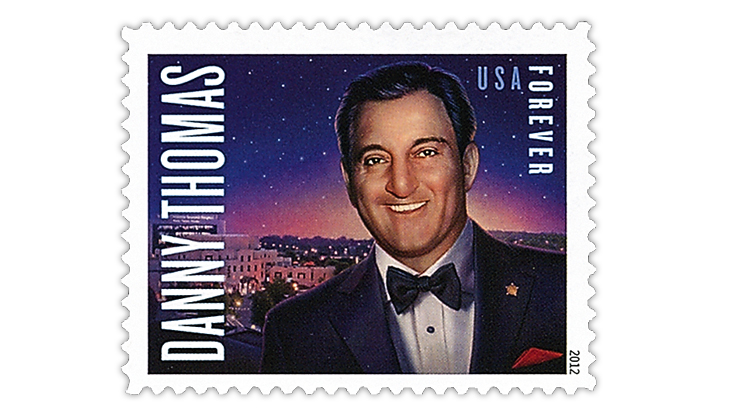 The 2012 Danny Thomas forever stamp was issued at St. Jude Children’s Research Hospital. The Memphis hospital founded by Thomas is shown in the background of the stamp honoring the entertainer. 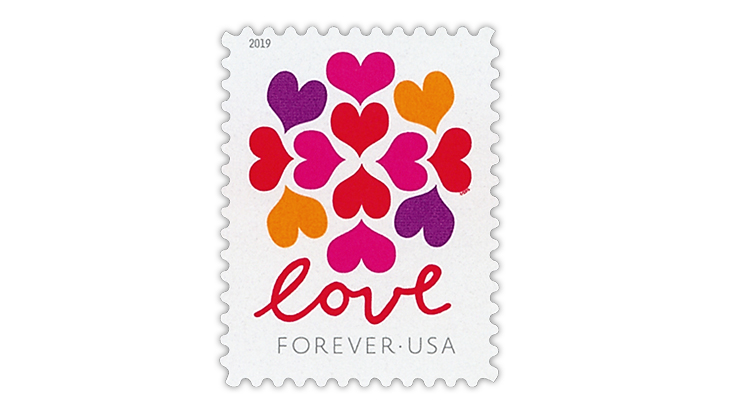 Hearts are a popular feature on America’s Love stamps. The forever stamp issued Jan. 10, 2019, also has a design composed mostly of hearts. 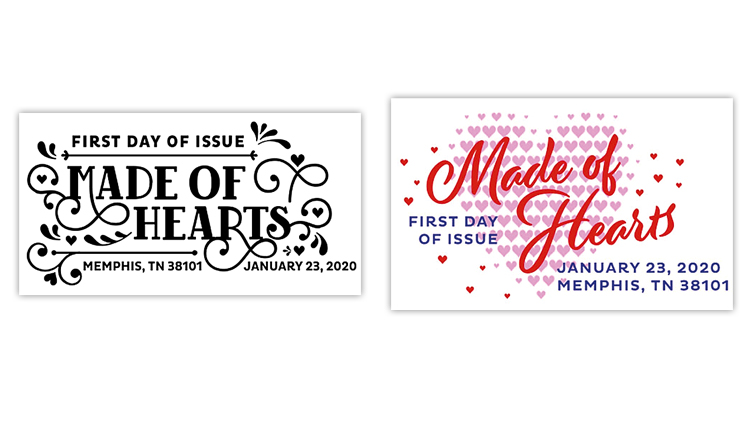 First-day cancels for the new Made of Hearts stamp also include hearts in their designs, as well as the name of the issue fully spelled out.
Previous
Next

The newest Love stamp from the United States Postal Service conveys its message with the most familiar symbol representing love: the heart.

The design of the nondenominated (55¢) Love: Made of Hearts forever stamp is composed of almost 300 small hearts in pink or red. Most of the 124 red hearts vary slightly in size from the pink hearts and are all carefully grouped to create a vibrant large heart shape in the center of the design.

The stamp is being issued Jan. 23 in panes of 20 with a first-day ceremony at St. Jude Children’s Hospital, 501 St. Jude Place, in Memphis, Tenn.

Though the 11 a.m. (Central Time) ceremony is free and open to the public, the Postal Service encourages anyone wishing to attend to register in advance online.

David E. Williams, the chief operating officer and executive vice president for the Postal Service, will be a featured speaker.

Collectors might recall that the 2012 Danny Thomas commemorative stamp (Scott 4628) was also issued at the research hospital in Memphis. Thomas was a founder of the hospital, and the hospital campus is depicted in the background of the forever stamp honoring him.

The Made of Hearts stamp is offset printed with microprinting. Ashton Potter USA, one of the two current Postal Service stamp printing contractors, printed and processed the new stamp.

The Postal Service’s series of Love stamps began in 1973 with a single 8¢ stamp showing Robert Indiana’s sculpture that spells the word “LOVE” by stacking LO above VE in a rectangular design (Scott 1475).

Flowers, hearts and the word “Love” have been popular elements on U.S. Love stamps.

The new stamp presumably will replace the 2019 Love Hearts Blossom stamp (Scott 5339), which features a design of hearts loosely arranged in a flower shape and the word “Love” spelled out in red script.

USPS art director Antonio Alcala designed the 2019 stamp, and he also designed the new Made of Hearts forever stamp.

“These new stamps from the U.S. Postal Service will deliver your message in style,” according to the USPS. “Hearts are used to signify more than romantic or eternal love. Hearts are universally understood to symbolize devotion, affection and love.

“While issued for use at Valentine’s Day, these stamps need no special holiday. This stamp is just right for thank-you notes, get well cards or any occasion when love is the perfect message.”

Two pictorial first-day cancels for the new issue spell out the name “Made of Hearts” and include small hearts within the designs. The cancels will be used on first-day covers prepared and sold by the Postal Service.