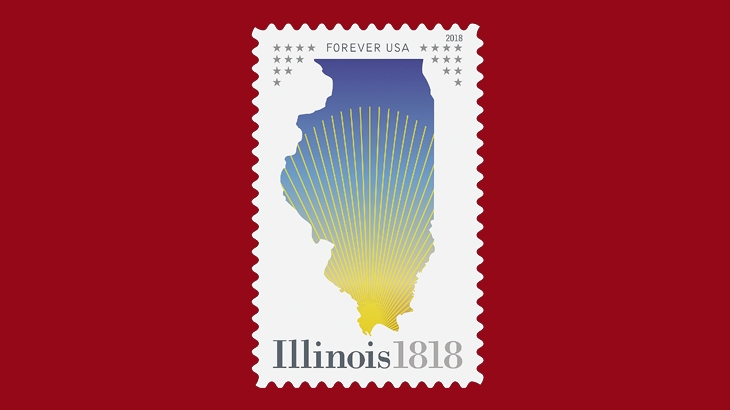 The Illinois Statehood forever stamp was issued March 5 with a ceremony at the Abraham Lincoln Presidential Library. 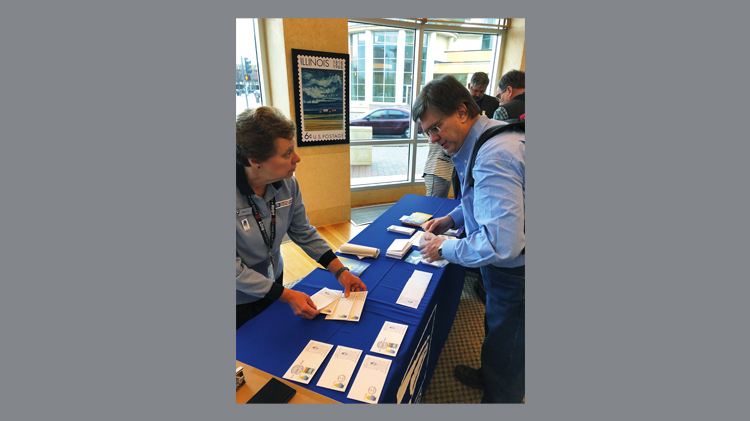 The Illinois Statehood commemorative forever stamp was issued March 5 at the Abraham Lincoln Presidential Library in Springfield, Ill.
Previous
Next

Philately shined just as bright as the sunburst on the new United States Illinois Statehood forever stamp issued March 5 in Springfield, Ill. Even before the doors opened for the first-day ceremony, the U.S. Postal Service was caring for collectors.

The day before the ceremony, the USPS sent an email to those who filled out the online RSVP form to share what time stamp sales would start. The collectors I chatted with appreciated this helpful tidbit.

The quality of the ink and cancellations at first-day ceremonies has been the subject of much ire over the years with first-day cover collectors. It appears that fast-drying ink is being provided, and that it’s working well having it at events. The complaints about poor cancels and ink that take forever to dry should diminish.

Even though these two items may seem minor, they improve the customer experience, and I hope that this trend continues for future events.

Another pleasant surprise was the number of speakers that incorporated stamp collecting into their speeches at this first-day ceremony.

The governor thanked the U.S. Postal Service for the honor of the new stamp and added that “because of the skilled stamp preservation by our many philatelic societies, I am confident that this stamp will be appreciated by many generations to come.”

Springfield Mayor James Langfelder shared how stamp collecting impacted his father, who had fled his Austrian homeland because of the Nazi occupation.

“But one of the things he did love was stamp collecting because it reaches back to your heritage,” Langfelder said.

While Langfelder’s father was fleeing Austria via Switzerland, he was aboard a train that was stopped for an inspection. He had his favorite booklet of stamps with him, and they took it.

Langfelder explained this impacted his father, who talked about it many times after.

Strako, a 26-year resident of Illinois, spoke fondly of the state and the places she has explored throughout. She also encouraged people to use the new Illinois Statehood stamp in writing letters and sending mail. She provided specific suggestions and situations from sending a note on Mothers’ Day, to sending thank-you notes, to writing a letter of encouragement for someone running in a marathon.

We’re all in this together, and it was nice being a part of a celebration for a state anniversary that also celebrated the philately aspect of it.

Exhibits and albums help us as we organize our collections