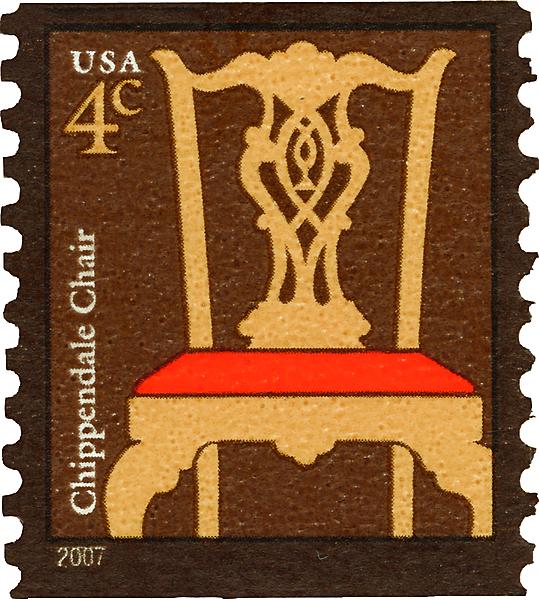 The United States Postal Service will issue a new coil variety of the 4¢ Chippendale Chair stamp with moisture-activated adhesive on Jan. 2. The stamp is part of the American Design definitive series.

The United States Postal Service will issue a new coil version of an American Design series stamp on Jan. 2.

The new 4¢ Chippendale Chair coil stamp is the latest addition to the definitive stamp series, and the first added to it since 2011.

Contrary to previous information provided by the Postal Service, reported in the Dec. 30, 2013, Linn’s on page 4, this new coil stamp will not be self-adhesive.

The two previously issued stamps using the Chippendale Chair design were created in a self-adhesive pane of 20 manufactured by Ashton Potter (Scott 3755) and issued in 2004, and in a coil of 10,000 with moisture-activated adhesive by Sennett Security Products (3761) issued in 2007.

Ashton Potter and Guilford Gravure worked together to print the new stamp. An initial run of 100 million stamps, or 10,000 coils, was produced using the gravure printing process.

Information about the frequency of the plate number appearance on the coil has not been disclosed by the Postal Service.

Among the users of the new 4¢ stamp will be bulk mailers who typically apply multiples of such stamps on mailed donation solicitations or return envelopes.

Stamps in the American Design series range in denomination from 1¢ to 10¢.

Lou Nolan of Virginia created the illustrations for most of the American Design series stamps, including the 4¢ Chippendale Chair stamp.

In addition to full coils of 10,000, a smaller strip of 100 stamps will be available for purchase from USPS Stamp Fulfillment Services.

The Postal Service will sell blank (no cachet) serviced first-day covers for the new 4¢ stamp. Each FDC will bear a single of the new coil and a single 46¢ Patriotic Star coil stamp, overpaying the current first-class letter rate by 4¢.

The price for each Postal Service cover is 94¢. The amount exceeding the face value of the stamps affixed is the servicing fee that the Postal Service charges for its uncacheted FDCs.

Technical specifications and first-day cancel ordering information for the 4¢ Chippendale Chair stamp are presented below.