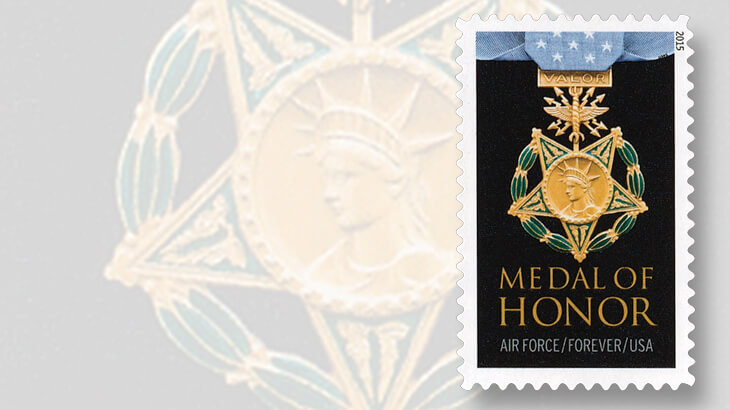 Stamps for the Medal of Honor during the Vietnam War were selected as the most important commemorative issue of 2015. 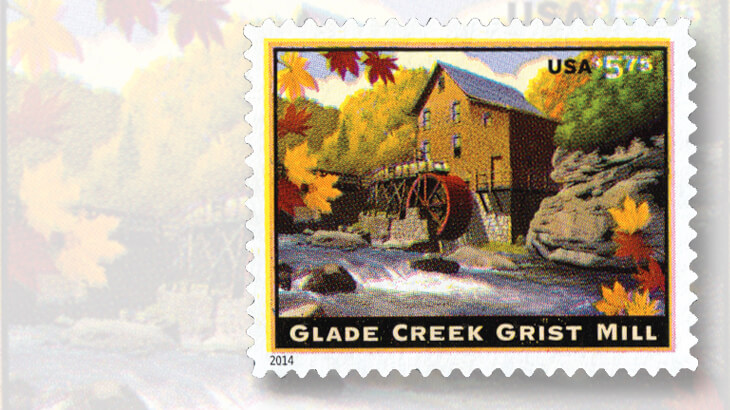 Stamp artist Dan Cosgrove again found favor with Linn’s readers, who voted his design for the imprinted stamp on the $5.75 Glade Creek Grist Mill envelope as the best for postal stationery. 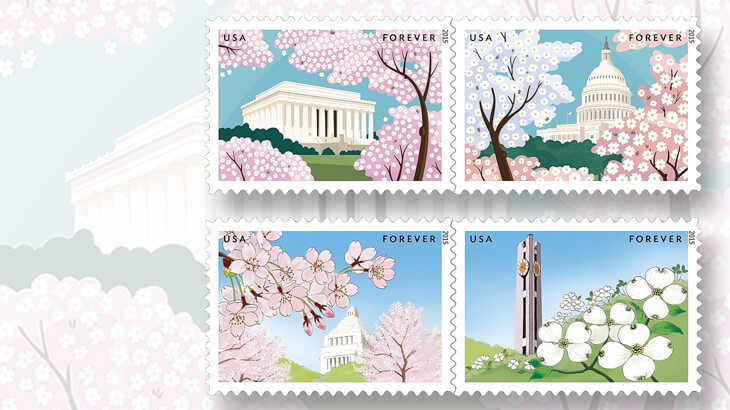 The best design among 2015 United States commemorative stamps, according to voters in the Linn’s poll, was the set of four Gifts of Friendship stamps, a joint issue with Japan. This set also came in second in voting for the overall favorite issue of the year. 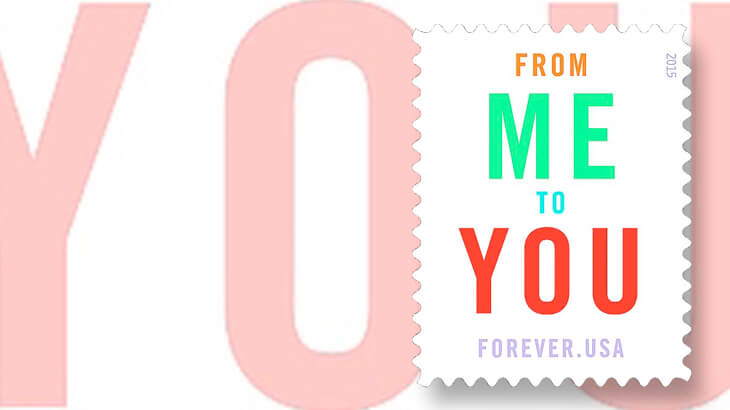 The From Me To You forever stamp was rejected by voters in the Linn’s poll, who picked it as the worst design commemorative, and the least necessary commemorative of 2015. 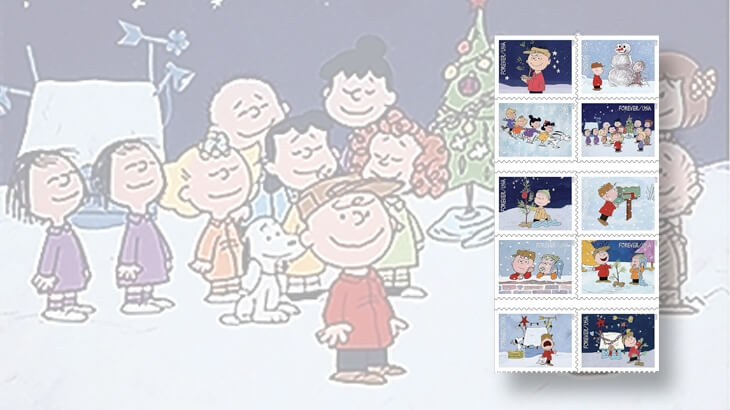 A Charlie Brown Christmas was the overall favorite of Linn’s readers who voted in the 2015 Linn’s U.S. Stamp Popularity Poll. The 10 stamps marking the 50th anniversary of the television special also were picked as having the best design among definitive and special stamps.
Previous
Next

Charlie Brown is a winner after all.

The comic strip character described on the Peanuts.com website as a “lovable loser” was chosen by Linn’s Stamp News readers as their overall favorite in the 2015 Linn’s United States Stamp Popularity Poll.

The set of 10 stamps titled A Charlie Brown Christmas took the top honors of the 33 stamp and postal stationery issues listed in the recent poll.

Voters also picked A Charlie Brown Christmas as the best definitive stamp design of the year, beating out the Summer Harvest stamps by a comfortable margin.

It’s not unusual that the 10-stamp set was picked by Linn’s readers. Collectors regularly favor stamp issues or sets with multiple designs rather than a single-design issue. Only three times since the favorite stamp category was established in 1984 has a single-design issue been picked as the overall favorite.

What is unusual is for the winner to come out of the definitive stamp category. In the Linn’s poll, definitive stamps and special stamps, including holiday stamps, are bundled together in a single voting category.

A Charlie Brown Christmas received 380 votes as the year’s overall favorite issue. The three runners-up in the category are the Gifts of Friendship set of four, a joint issue celebrating cooperation with Japan, which received 289 votes; the Civil War 1865 set of two with 175 votes; and another definitive set, the Summer Harvest set of four forever stamps, with 116 votes.

More than 580 readers voted online this year, an increase of about 200 over last year’s online voting numbers.

The tables provided here list the poll results for the overall favorite and for the three specific categories of commemorative stamps, definitive and special stamps, and postal stationery.

A separate section on the ballot was reserved for the voter’s overall favorite 2015 stamp.

Mail-in ballots and online votes were accepted from mid-December 2015 through March 1. The ballot was published weekly in Linn’s during the voting period.

The poll total includes 204 mail-in ballots from children, mostly from school classes and youth stamp clubs. This figure is close to the 215 youth ballots received in the 2014 stamp poll.

Youth votes are counted equally with all other votes, but they also are looked at separately by Linn’s editors to gauge how youngsters view the U.S. program.

The winner for youth overall favorite, with 29 votes, was the Gifts of Friendship set. Coming in close behind in second place was A Charlie Brown Christmas with 21 votes. Third place in the youth voting was won by the Emperor Penguins stamp for additional ounce postage.

The Gifts of Friendship issue was the overwhelming commemorative favorite for best design among youngsters, receiving 95 votes. The runner-up, the Year of the Ram stamp, collected just 19 votes.

In the general voting, the Gifts of Friendship stamps also landed at the top of the best-designed commemorative list, with 709 votes. Coming in at a distant second was the Civil War 1865 set, with 257 votes. Third place was claimed by the U.S. Coast Guard stamp, with 207 votes.

Almost 23 percent of the votes for worst-designed commemoratives went to the pair of World Stamp Show-NY 2016 stamps, which received 448 votes to place second in the category.

Stamps with themes of military history claimed the top four spots in the most-important commemorative category: The Vietnam War Medal of Honor stamp came in first with 534 votes, followed by Civil War 1865 with 572, War of 1812 Battle of New Orleans with 175, and U.S. Coast Guard with 148. The combined total of these four issues in the most-important stamp category claimed more than 72 percent of the vote.

The fifth most important stamp according to voters’ preferences was the Forget-Me-Not Missing Children stamp, which received 134 votes.

The From Me To You stamp suffered a double blow by coming in as the overwhelming choice for least necessary commemorative, attracting 730 votes.

The Elvis Presley stamp in the Music Icons series was voted the second least necessary stamp, with 375 votes.

Although the 29¢ Elvis stamp issued in 1993 was one of the biggest U.S. commemorative sellers of all time, it also fared poorly with stamp poll voters, coming in as the least necessary commemorative in that year’s Linn’s poll.

A Charlie Brown Christmas was the best design winner among definitive stamps in 2015, with 510 votes, almost exactly one-fourth of the votes cast in that category.

Second place for best design went to the Summer Harvest stamps with 383 votes, followed by the Water Lilies stamps with 192.

Linn’s readers cast 606 votes to bestow the title of worst-design definitive to the Patriotic Waves stamps, the $1 and $2 definitives with abstract geometric patterns in red and blue.

The most important definitive stamp of 2015 was the Stars and Stripes issue, a set of three coil stamps each showing segments of the American flag. With 546 votes, Stars and Stripes had a comfortable lead over A Charlie Brown Christmas, which earned 419 votes in the same category.

Collectors cast 409 votes, about one-fifth of all votes in the category, to pick the Patriotic Waves stamps as the least necessary definitive issue.

Coming in second, with 272 votes, was the Geometric Snowflakes set of four, issued when the Charlie Brown Christmas set was already available at post offices.

That was the order in which voters picked the postal stationery for best design. The Glade Creek Grist Mill envelope was the winner by far, with 1,116 votes compared with the Water Lilies runner-up with 326.

The Fanciful Flower postal card was picked first in the worst design and least necessary categories, and the most important postal stationery item was the Forget-Me-Not Missing Children envelope.

As in years past, some Linn’s readers included comments with their ballots, giving reasons for their votes and expressing opinions about the U.S. stamp program in general.

David Cohen wrote a note expressing appreciation of the Music Icons commemorative series, which offered the Elvis Presley stamp in 2015.

“I doubt many of my fellow readers agree with me, but I think it is one of the best U.S. series ever, both in terms of design and the way it honors a vital area of U.S. culture,” Cohen wrote.

His letter arrived franked with the Elvis stamp.

John G. Pearson wrote that “Elvis deserves note as a significant influence on American culture,” but he cast his vote for Elvis as least necessary because, “we’ve honored him before.”

Criticism of the World Stamp Show stamps was found in multiple letters. Sarah Noble wrote, “I think many philatelists found this issue disappointing, seeing it as boring and uninteresting even to stamp people and sensing that this issue would not attract nonphilatelists to the show in New York, nor to the hobby of stamp collecting.”

Steven Scheibner had praise for the Medal of Honor Vietnam War issue, which he picked as “the most important issue of 2015.”

“This stamp issue pays homage to those who earned the Medal of Honor,” Scheibner wrote, “and, indirectly, recognizes those who served.”

Like many voters, Diane Henicle enjoyed the stamps for Charlie Brown.

“The Charlie Brown stamps are well designed, colorful, eyecatching. Would have been better twice the size it was offered in, so the details stood out.”

Robert W. Martin runs a stamp collecting club for children in Hawaii, and sent in 31 ballots from the youngsters of the Kamali’i Elementary School, plus three adult ballots.

“For most of the children (maybe all of them) this was the first time they ever voted for anything,” Martin wrote.

The club meets every week in the school library.

Thanks to this year's participants

Thanks to all Linn’s readers who participated in this year’s poll. Special thanks go to teachers who distributed ballots to the students in their classes, and to stamp clubs that submitted ballots after distributing them to members during club meetings.

Voting in Linn’s U.S. Stamp Popularity Poll for 2016 is scheduled to begin in December.