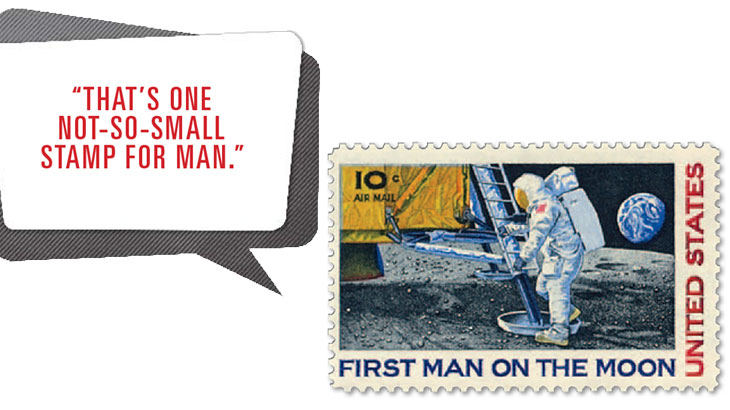 First, let me say thanks to the U.S. Postal Service for the recent announcement that it will issue a pair of stamps to mark the 50th anniversary of the first manned moon landing (Linn’s, April 8, page 1).

Quite a few Linn’s readers entering the March cartoon caption contest said they were disappointed that the Postal Service seemed to be ignoring the anniversary. Now we know that two commemorative forever stamps will be issued on July 19.

The cartoon contest stamp for March was the 10¢ airmail (Scott C76) issued Sept. 9, 1969, to commemorate the July 1969 moon landing of astronauts Neil Armstrong and Buzz Aldrin (while Michael Collins piloted the Apollo 11 capsule in moon orbit).

The old saw about the moon being made of green cheese was the focus of a great many entries in this contest. Gretchen Riley of Manassas Park, Va., represents this group with “All this cheese and no wine?”

The second most popular theme was the need to step carefully on the surface of the moon. Space dogs were a favorite target, but this entry by Doug and Mildred Barylski of Warrenton, Va., was especially creative: “Eww! I just stepped in evidence that the cow jumped over the Moon. Guess it’s called a moonpie up here!”

Also inspiring the entrants was astronaut Alan Shepard playing golf on the moon’s surface during the Apollo 14 mission. Clyde Holt of Edenton, N.C., has the astronaut asking, “Which way to the first tee?”

The winning entry in the philatelic part of the contest matched the large commemorative format of the 10¢ airmail with Armstrong’s iconic line as he set foot on the moon, ”That’s one small step for a man; one giant leap for mankind.”

I had the quote wrong in the column (Linn’s, March 11) that announced this contest. Thanks to Alex Kaplan of Naples, Fla., who wrote to correct me.

On the nonphilatelic side, the winner is Brent Carter of St. Petersburg, Fla., whose entry is: “I am now standing on the surface of the Moon … Who’s the loser now Sally … HAH! When I asked you to the prom and you laughed at me and called me a loser … well, I’m standing on the surface of the Moon, and you’re working the night shift at a fast food eatery. So, who’s the loser now, Sally? Guess I’ve proved that I’m not the loser you thought!”

“Hold on a second. I dropped my tongs,” by Gary Goldstein of Ankeny, Iowa.

“Mrs. Kramden? Alice? Ralph says he’s sorry, and he sent me to bring you home,” from Gary Dunaier of Flushing, N.Y.

“Here I am on the Sea of Tranquility — and I forgot my fishing pole,” by Jean Marie Woehler of Wapakoneta, Ohio.

“Geez, you’d think they’d bother to vacuum once in a while!” sent by Laura and Tom Tomaszek of Cedar Rapids, Iowa.

“OK, Buzz … that’s not funny. Do you or do you not have the keys!” from David Key of Minneapolis, Minn.

“Reporting a Moon river, estimated wider than a mile.” by Donna Sharpe Smith of Wilmington, Del.

The next contest will be announced in the May 13 issue of Linn’s.