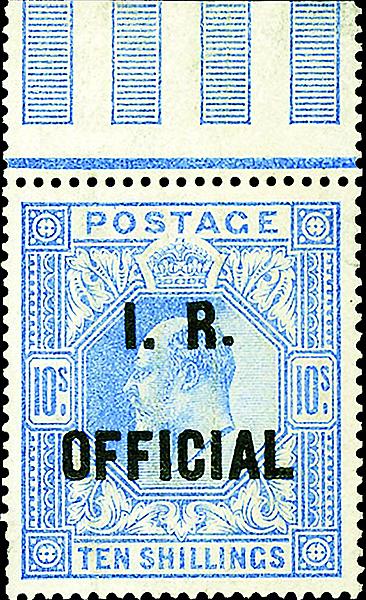 Another offering during the Cherrystone auction is this rare 1902 10-shilling British Official stamp with an overprint variety. 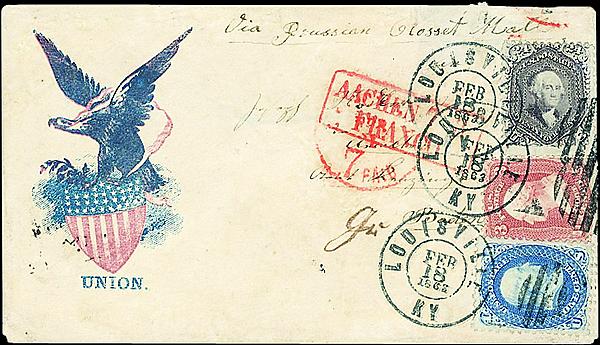 Cherrystone will offer of the 1979 $1 Candleholder stamp with inverted brown color, popularly known as the CIA invert, during its June 10-11 auction.

The sale will take place in the firm’s New York City galleries at 119 W. 57th St.

A single example of the 1979 $1 Candleholder definitive stamp with the intaglio brown color inverted will be offered during the first of four sessions conducted over the two-day sale.

The error stamp (Scott 1610c) is known to collectors as the CIA invert because of its discovery by CIA employees who purchased the stamps for business use at a McLean, Va., post office substation.

A nearly complete pane of 95 error stamps was originally purchased. The remaining five stamps from the pane of 100 were never accounted for.

The example in the Cherrystone auction is described as being in very fine condition and never hinged.

The error is listed in the 2014 Scott Specialized Catalogue of United States Stamps and Covers with a value of $17,500. The example offered by Cherrystone carries an estimate of $14,000.

The first session also includes a 1992 25¢ Stock Exchange Bicentennial commemorative stamp with the intaglio black center inverted (Scott 2630c). Cherrystone notes that only two panes of 28 stamps were discovered with this error, resulting in a total of 56 invert stamps.

The stamp, described as a never-hinged very-fine bottom sheet margin single, is listed with an estimate of $15,000 against the Scott U.S. specialized catalog value of $18,500.

The auction begins with proofs of U.S. postmaster’s provisionals and the 1847 issue, and continues with a broad selection of American classic stamps.

Some stamps are offered on piece or on cover, including the 1861 3¢ pigeon blood pink George Washington (Scott 64a) on a patriotic cover decorated with a portrait of Union Army Maj. Gen. George B. McClellan. The stamp is tied by a clearly struck Cincinnati, Ohio, postmark dated Oct. 29, 1861. Cherrystone describes the item as having “tiny cover flaws at bottom, fine and rare usage of this scarce color on a Civil War patriotic cover.”

It is offered with a 1973 Philatelic Foundation certificate, without the soldier’s letter that originally accompanied the cover, and is estimated at $2,000 against the Scott catalog value of $7,750.

Among the worldwide stamps and covers in the auction is an outstanding British rarity, the overprint variety of the 1902 10-shilling ultramarine King Edward VII Official stamp (Scott O25a).

The stamp is a top sheet margin single, one of just seven known with the raised period following the “R” in the first line of the overprint. Like all of the known examples, this one is without gum. It is unused and slightly soiled with short perforations at bottom left, according to the auction description.

The worldwide selection includes Germany and colonies, Great Britain and Commonwealth, Italy, Russia and much more.

The auction is listed on the Cherrystone website at www.cherrystoneauctions.com.